The 10 Perfect Christmas Gifts For A Real Mancunian

Mancunians are a very proud people and they have a lot to be proud of. Manchester is the home of the Industrial Revolution, great music and, of course, two very famous football teams. Its other dependable dimension is rain, but this doesn’t get the famously cheerful Mancunians down. We discover 10 perfect gifts to present to your favorite Mancunian for Christmas. 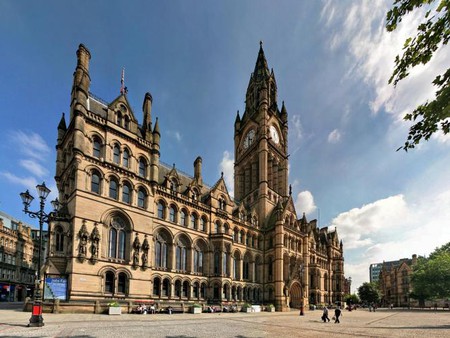 The Cornerhouse on Oxford Road, soon to be moving down Whitworth Street West to the new First Street development, offers a year-round program of film and art, as well as housing a popular restaurant and bar. It is Manchester city center’s independent cinema and screens many of the films that are difficult to find at the AMC, Odeon, Cineworld or Vue. For real film auteurs, there are also specially curated festivals and seasons, ranging from Latin American cinema to Merry 1980s Christmas and special screenings with Q&As from the film’s filmmakers. Membership benefits include discounts aplenty, priority bookings and exhibition previews. 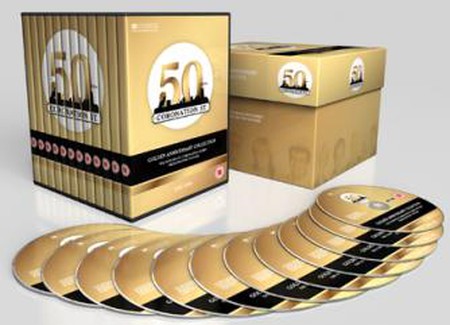 Mancunian’s love a nightly dose of the nation’s favorite soap. This may be a sweeping generalization – and you may argue that Coronation Street is actually in Salford rather than Manchester – but the city is responsible for a great proportion of the viewing numbers, thus this 12 disc box set is a veritable treat. Featuring classic episodes from the last 50 years, special segments on the most popular families, specials on some of the soap’s biggest storylines and extra behind the scenes featurettes, this is indispensable for any true Coronation Street fan. This is an ideal way to while away the cold, wet winter months. 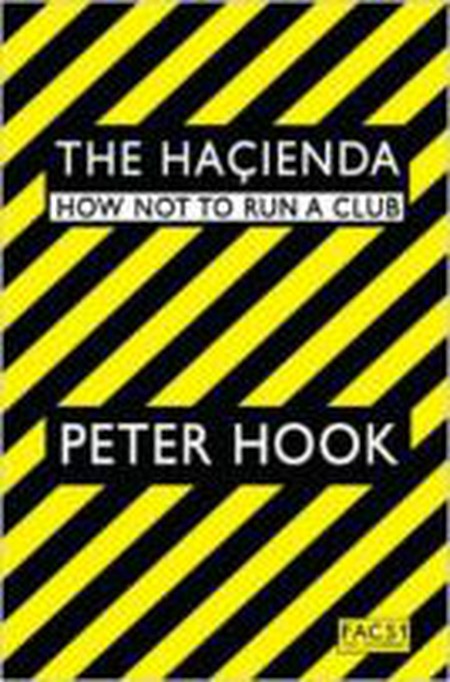 Peter Hook, The Hacienda: How Not To Run A Club, Pocket Books

The Haçienda: How Not To Run A Club

What was once one of the most famous clubs in Britain and home to the Madchester movement, is now, like so many buildings, an apartment block. The Haçienda: How Not To Run A Club takes you back to the club’s glory days, as well as to its spectacular downfall. Written by the club’s co-owner Peter Hook, also of Joy Division and New Order fame, the book charts Hook’s anecdotal history of the club from its opening in 1982 to its closure in 1997. This is for the fans of the history of acid house and club scene, or, more generally, for those who enjoy reading a fun, if not mildly bizarre, memoir. 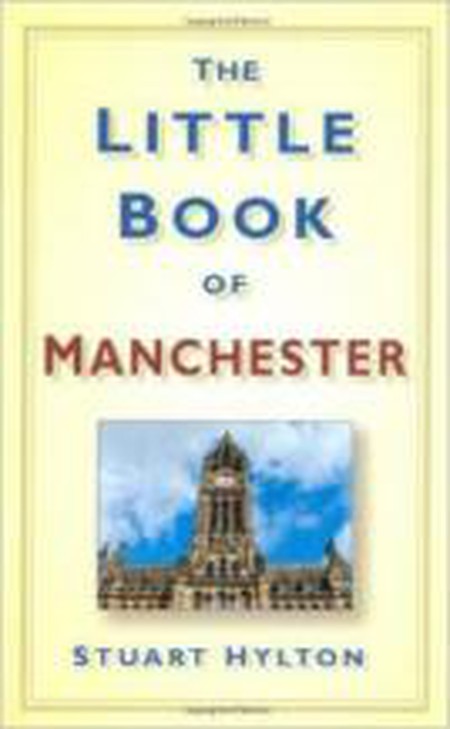 Stuart Hylton, The Little Book of Manchester, The History Press

The Little Book of Manchester

Often, the people that live in a city know less about it than visiting tourists. Well, for those Mancunians who need to learn more about their fair city, this is the perfect gift. The Little Book of Manchester is, as the name suggests, a little book – 12.5 x 2 x 19.8cm – compiling interesting facts about the city’s most notable people, places and events from the Roman era to present day. It is also littered with interesting tidbits about some of the city’s more eccentric characters, in addition to the more famous great men and women who brought radical social and political change. A fun read that will make you better understand the city’s origins and equip the reader with fun facts for walking through town. 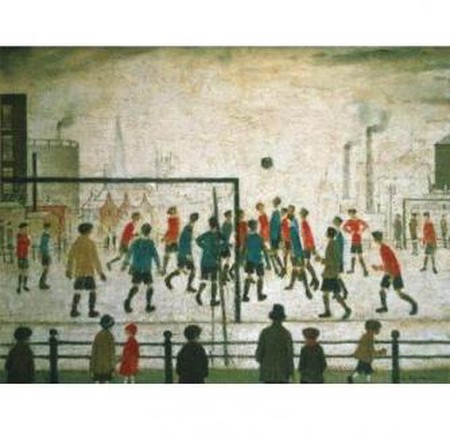 L.S. Lowry, The Football Match | Courtesy of The Lowry Theatre

While The Lowry and many of Lowry’s paintings are based in Salford, Lowry himself was from Stretford, which falls in Manchester. Also, a number of his paintings are displayed in the Manchester Art Gallery, so these are definitely suitable for Mancunian art fans. These Lowry prints are available in the Lowry Theater’s physical and online stores, featuring some of the artist’s most famous works, including The Football Match, Coming Home From The Mill and Head Of A Man [With Red Eyes]. There is also a print of Piccadilly Gardens in its 1954 glory. The prints range from Lowry’s early to late career and include cityscapes, seascapes and portraits, all, of course, being very distinctively Lowry, arguably Manchester’s finest artistic output. 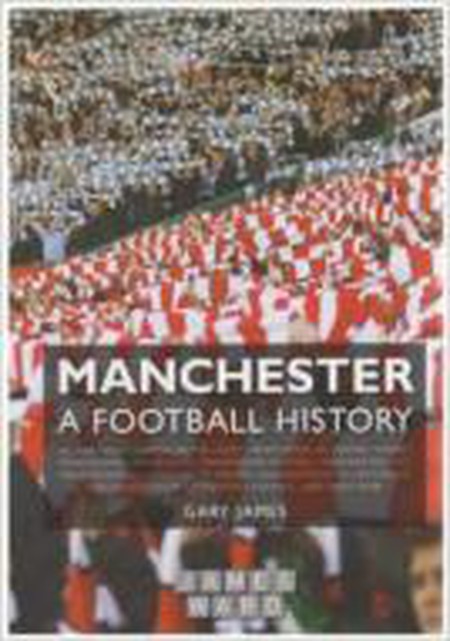 Worldwide, Manchester is probably most famous for its football. Stories go that there are people whose only knowledge of the English language is the phrase “Manchester United.” With manager Sir Alex Ferguson retired and Manchester City perennial contenders in the Premier League, Manchester’s football landscape is now largely different to that of the past hundred or so years. Manchester – A Football History provides a definitive history of football in the city, as the title suggests. Published in 2008, it doesn’t quite cover City’s highest points, but by going back to the 17th century, it provides one of the more comprehensive histories of football that has been published, and also discusses teams beyond City and United, including Stockport, Bury, Oldham and Rochdale. 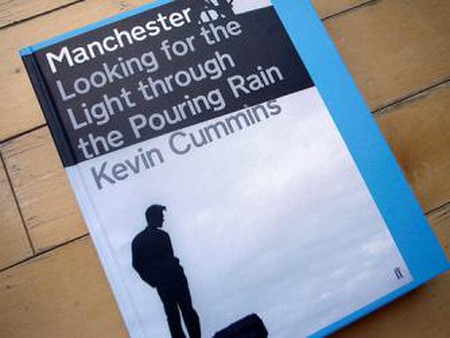 Kevin Cummins, Looking For The Light Through The Pouring Rain, Faber and Faber

Manchester: Looking For the Light Through the Pouring Rain

Is the coffee table looking a bit empty? Manchester: Looking For The Light Through The Pouring Rain is a collection of photographs taken and curated by Manchester photographer Kevin Cummins. The book features shots of Joy Division, New Order, Buzzcocks, The Fall, The Smiths, Happy Mondays, Stone Roses and Oasis. For over 30 years, Cummins has managed to capture some of the most iconic and intimate moments of Manchester’s pop history and upon its release, was accompanied by an exhibition in the Richard Goodall Gallery. The photographs are accompanied by text contributions from Paul Morley, Stuart Maconey, Gavin Martin and John Harris. 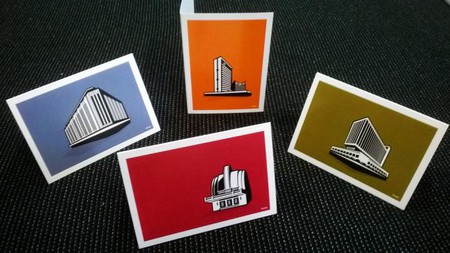 These fantastic gifts are greetings cards for the art conscious. The Manchester Modernist Society has fashioned a number of stylish greetings cards featuring some of Manchester’s most famous modernist buildings, including Stretford’s Longford/Essoldo Cinema, Kendal Milne, Marks & Spencer and Piccadilly Plaza. Their online store also hosts various other gift ideas for fans of modernism, brutalism and 20th century architecture in general, such as T-shirts, badges and The Modernist magazine. If this wasn’t enough to make you want to visit the store, Johnny Marr is a patron of the society. A Mancunian gift needs a Mancunian card to accompany it. 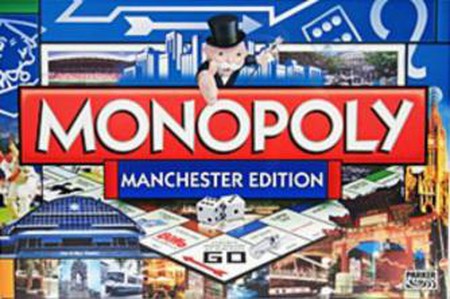 Everyone’s favorite board game for everyone’s favorite city. With a Monopoly now available for seemingly every city, television show or marketable entity, it is no surprise that Manchester has its own, as well as for their two beloved football teams. Get the whole family round the table after Christmas dinner and quarrel over the place selection, along with the money. Is St Ann’s Square really the Mayfair of Manchester? Does poor Ducie Street deserve to be Old Kent Road? Any proud Mancunian will appreciate having this at home, even if it does come out once a year or whenever there is a lull in conversation with the whole family round. 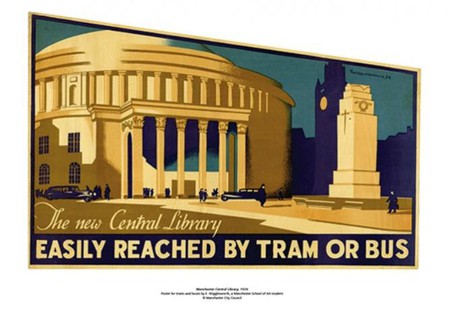 Archives+, Manchester’s archival center of excellence based in Central Library, has dug through their extensive collection and found a number of attractive advertising posters for the city from the past 100 years. Reproduced from the originals, these posters will give Mancunians a hit of nostalgia with posters advertising popular visitor destinations including Central Library, Wythenshawe Hall, Boggart Hole Clough and Heaton Park. There are also more ‘general’ advertising posters for football, nursing and house hunting, as well as maps of Greater Manchester.