10 Reasons Everyone Should Visit Manchester at Least Once 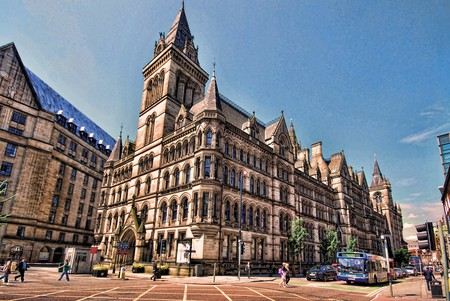 If you haven’t already spent time in the northern powerhouse, what are you waiting for? Manchester is one of the most vibrant cities in England, throbbing with creativity, full of interesting architecture and home to possibly the most famous football club in the world. There truly is something for everyone in this industrial city – and we promise that it doesn’t always rain!

There’s Not Just One Hip Neighbourhood

You’ve probably heard about the Northern Quarter, the creative hub in the centre of the city boasting colourful street art, independent shops and plenty of bars selling craft beer. This hipster haven isn’t the only cool neighbourhood in the city, however. Right next door you’ll find up-and-coming Ancoats, filled with great places to eat and drink and touted for great things by the international press. Hop on a tram and you can explore the bohemian suburb of Chorlton, bustling West Didsbury and foodie-favourite Altrincham.

Mancunians Know How to Party

Manchester really comes to life at night, and if you’re looking for a party you can’t go wrong with a Saturday night out in the city centre. Head to the Northern Quarter for craft beer or cocktails in the hippest bars, or over to Spinningfields if you prefer a more elegant atmosphere.

Come down to the basement and get £5 #mojitos all night. (Until we run out) #manchester #nq #northernquarter #mcr #tiki #southpark

Mancunians seem to love their food with no end of choices when it comes to eating out in the city centre. Whether you fancy Italian, Indian or Chinese, Manchester’s restaurant scene is thriving, with a variety of street food markets popping up all across the city for a more relaxed atmosphere. Make sure you pop over to Altrincham market to experience one of the best food markets in the entire country.

Summer's here..we'll it is according to @_littlewindow …it may be snowing outside at Market House it's summer inside. Brown & white crab, puntarelle, chicories, sorrel mayonnaise, Amalfi lemon..seasonal delights in unseasonal weather

The City is Surrounded by Beautiful Landscapes

If you get sick of the city streets, Manchester’s unique location places it as the perfect base for exploring vast moors, towering mountains, beautiful coastlines and green forests. The Peak District, Pennines, Yorkshire Dales, Lake District and North Wales are all within a short drive of the city centre, offering endless opportunities for walking and exploring.

Planning to ignore the weather forecast and head to the Yorkshire Dales this long weekend. We know the area, but would welcome any tips for good walks (and perhaps rainy day alternatives!) – @rebecca.iris I'm looking at you!

It’s true what they say, Northerners are a friendly and welcoming bunch and Mancunians are no exception. You’ll find a warm community who are more than willing to offer directions, share recommendations and chat to you on the bus. Just don’t ask your new friends if they support United or City.

It’s the Home of the World’s Greatest Football Team

Whether or not you support Manchester United, you have to admit that they are probably the most famous football team in the entire world. Wherever you travel, as soon as you mention you are from Manchester it is the first thing people bring up. If you’re interested at all in football, a visit to Old Trafford stadium isn’t the only attraction that awaits you in Manchester. The National Football Museum recently relocated to the city centre and is a must-visit for all fans of the beautiful game.

@JoseMourinho: "He's a 19-year-old kid in love with football. He works, he's mature and what matters is not his age but his quality." ❤️⚽️#MUFC

Think you have to head to the capital to wander around a top-class gallery? Think again! Not only does Manchester have an interesting scattering of independent galleries, open studio tours and pop-up exhibitions, it’s also home to the award-winning Whitworth Gallery. Located in the middle of a park on the Oxford Road corridor, this recently reopened gallery hosts a rotating series of exhibitions by iconic artists such as Andy Warhol and Cornelia Parker.

Summers on its way, so come down and dine in the sunshine #galleryinthepark #thewhitworth #MUMA #cafeinthetrees #architecture #sunshine

Those with their heads stuck firmly in the past should flock to Manchester to visit the iconic Salford Lad’s Club or to wander past the site of the Hacienda. Anyone more interested in the current music scene will find delight in Manchester’s many music venues, ranging from huge arenas to beautifully restored music halls (such as The Albert Hall and The Deaf Institute) and small local-favourites such as The Castle Hotel.

THANKS TO EVERYONE WHO WATCHED US AT WHEN IN MANCHESTER FESTIVAL. LOVED IT!!! BACK UP ON 22nd FOR @thisfeelinghq SOME GREAT BANDS. GRAB YOUR TICKETS FAST AS THEY'RE FLYING OUT! MUCH LOVE X

The Christmas Markets are the Best in England

If you want to get into the festive spirit, there’s no better place in the UK than Manchester’s Christmas markets. Now spanning all across the city, the markets may be overpriced and crowded but it’s all about grabbing a seat and spending a weekend afternoon sipping mulled wine, eating strudel and feeling festive.

I got to walk past this lovely sight on the way to the station on my way home. #manchester #manchesterchristmasmarkets

You Can Shop Until you Drop

Whether you prefer designer department stores, high street stores or independent boutiques, Manchester has something for everyone. If you manage to tire of all the shops in the city centre, pop over to the Trafford Centre for fresh scenery or branch out in the suburbs to discover an intriguing array of independently owned boutiques.