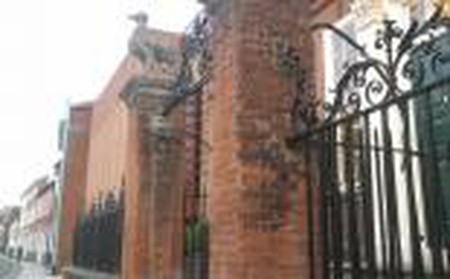 A trip to England’s South Coast becomes an artistic exploration for Robert Hugill, as he visits the independent galleries which are making the region a cultural and artistic destination: Towner Art Gallery, Pallant House and the Novium. 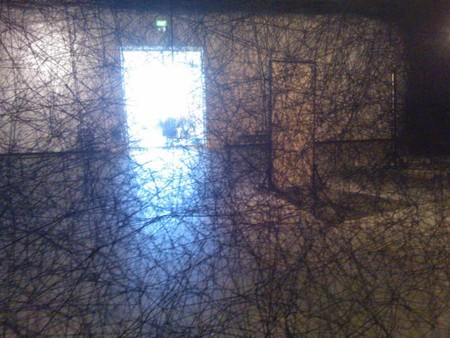 Other Side at Towner Art Gallery – | © Robert Hugill

Whilst visiting the Brighton Early Music Festival in 2013 we decided to take advantage of the time to explore further afield than Brighton by visiting a couple of the new galleries which have sprung up on the South Coast. Pallant House in Chichester now has a fine new modern wing designed by Colin St. John Wilson, and the Novium is an entirely new museum in Chichester by Keith Williams Architects. Travelling East from Brighton you come to Eastbourne, where the Towner Art Gallery has moved entirely, leaving its cramped but lovely 18th century house and coming to rest in a brand new building by Rick Mather next to the Congress Theatre.

Pallant House in Chichester is a perfectly proportioned Queen Anne House near the Cathedral. It was opened to the public in 1982 with a fine collection of 20th century British art collected by Walter Hussey. (Hussey had been Dean of Chichester Cathedral, a great supporter for the arts and during his career he had been responsible for commissioning both Marc Chagall and Benjamin Britten.) Subsequent collections have only served to expand the museum’s depth in 20th century British art. The gallery was expanded with a modern wing in 2006 which provides for a stylish brick entrance wing next to the Queen Anne house, as well as gallery wings around the rear courtyard, Wilson’s plain white and glass forming an elegant contrast to the classical formality of the rear facade.

In addition to its own collection, the museum has a lively programme of exhibitions and one of the joys of the building are the way sequence of works shown flows nicely, with rooms of works from the Pallant House collection complementing the exhibitions. 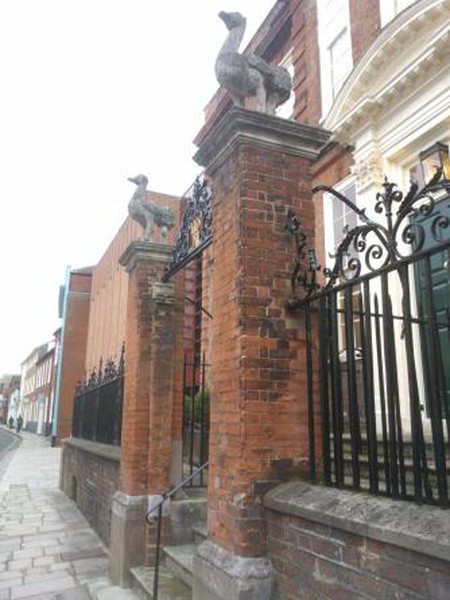 In the print room there was a display of work by Eric Ravilious, one of the most significant British artists working in the 1920s and 1930s. Starting with Ravilious’s amazingly detailed woodcuts from the 1920s the display took in his developments in wood engraving, designs for pottery, his first lithograph, of Newhaven Harbour, and a series of elegantly evocative lithographs of high street shops, for the book High Street. His final works were his submarine lithographs, produced just before his death in 1942 whilst working on Air Sea Rescue in Iceland. Part of his work as a war artist, these were elegant yet poignant works.

The gallery has recently acquired on long term loan the Mill House Collection, created by EQ Nicholson in the 1940’s. Elsie Queen Nicholson (1908 – 1992) was the wife of Kit Nicholson (brother of the artist Ben Nicholson, son of the artist William Nicholson), she was a textile designer known for her linocut print fabrics. The Mill House Collection encompasses a variety of pictures by the Nicholsons and their friends. In the Queen Anne dining room were displayed family portraits, Winifred Nicholson’s evocative portraits with their free use of paint contrasting strikingly with the more formal style of her father-in-law, William Nicholson. Winifred was the wife of Ben Nicholson and also included in the display was a rare Ben Nicholson portrait of Winifred and their son Jake.

In the main room of the Queen Anne house were displayed testaments to EQ’s friendships, with paintings and drawings by John Caxton (1922-2009) and Lucian Freud (1922-2011) including a Freud drawing of John Caxton and an ink drawing by Freud of the Nicholson family donkey, plus Ben Nicholson’s hand painted Christmas cards.

Also on display were the gallery’s own holdings of works by Ben and Winifred Nicholson and the rooms were furnished with period furniture, creating a more intimate ambience than many galleries. Upstairs, in what were the bedrooms, were displays of British surrealists such as Eileen Agar and John Tunnard, including Edward Burra‘s surprisingly modern looking The Straw Man (1963), plus a Hepplewhite bed complete with a bedspread owned by Edward James, the great surrealist patron. In an adjacent room we had landscapes by Roger Fry, David Bomberg and John Nash, plus an amazing miniature gallery created in 1934 with original miniatures by artists such as Paul Nash, Duncan Grant, and Vanessa Bell. This miniature gallery was complemented by a modern one completed in 2000 acquired as part of a gift of works from the architect Colin St John Wilson. 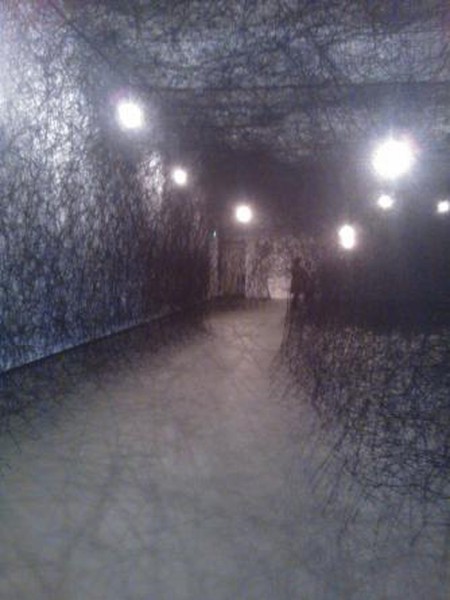 Other Side at Towner Art Gallery – | © Robert Hugill

To celebrate the gallery’s acquisition of Sean Scully’s Pink Dark Triptych (2011), the modern wing had an exhibition of triptychs by Scully (born 1945). With three galleries covering Scully’s ‘Early Work’, ‘Painting, Prints and Drawings 1990-2005’ and ‘Painting since 2005’ we saw the artists development and the importance of the triptych in his output with Scully’s abstract art fusing abstract expressionism and minimalism.

Next door to the Scully exhibition was the main modern gallery, a lovely top-lit space on the first floor overlooking the elegant rear courtyard of the museum. In this gallery were displayed more recent works by artists such as Frank Auerbach, Michael Andrews, Graham Sutherland and Eduardo Paolizzi. Paolozzi’s work included the maquette for his statue of Newton, for the British Library which linked to an adjacent display from the Cass Sculpture Foundation of artists maquettes. The Cass Sculpture Foundation runs the nearby Goodwood Sculpture Park and many of the maquettes were for large-scale sculptures at the park, though rather frustratingly there were no pictures of the finished articles.

The gallery has an excellent cafe with seats on the courtyard (weather permitting) and a well-stocked shop, full of fine monographs and artists books.

Whilst in Chichester it is worth visiting The Novium, a striking new building by Keith Williams Architects which is built over the remains of the city’s Roman bathhouse. You can see the bath-house remains, and watch a film of striking scantily clad young men in a re-creation of Roman bathing habits. There are in fact three floors of exhibition space housing the collections of Chichester District Museum with a collection spanning thousands of years of history, with an emphasis on social history, archaeology and geology.

A short walk away from The Novium is Chichester Cathedral, itself the result of over 900 years of history. The original building dates from the late 11th century with the inevitable changes and developments accreting over time to create a building which combines charm with history. The building houses Chichester reliefs, early 12th century pre-gothic sculptures almost unique in English art, and paintings by the Tudor artist Lambert Barnard (more of whose work can be seen at Pallant House). Contemporary art in the cathedral includes paintings by Graham Sutherland, Hans Feibusch and Patrick Proktor, a tapestry by John Piper and a window by Marc Chagall, with much of it commissioned by Walter Hussey. The 14th century tomb of Richard FitzAlan, Earl of Arundel and his second wife Eleanor inspired Philip Larkin’s poem ‘An Arundel Tomb’.

By contrast the Towner Art Gallery in Eastbourne a gleaming new building. Rick Mather‘s building takes advantage of the stunning views from the site so that the corridor which bisects both the first and second floors has glorious views from the windows at either end, the cafe on the second floor similarly takes advantage of the location and the view is even visible in the lift! In fact, the lift is almost an attraction in its own right, holding up to 80 people it doubles as a goods lift for large works of art. There is a window which allows you to catch glimpses of the view, a magical journey to the top of the building. 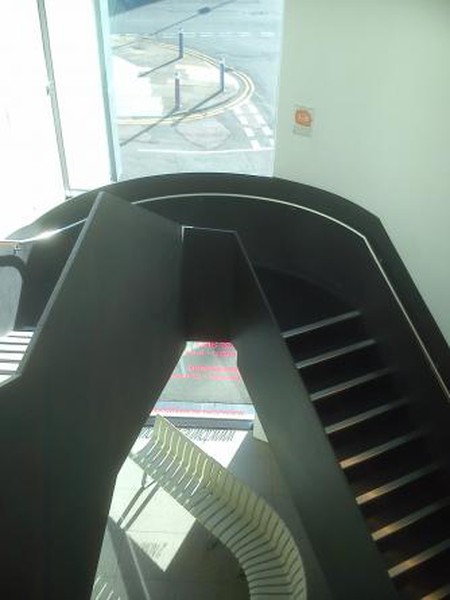 The Towner collection started in the 1920s with the bequest of 22 paintings. It grew from Victorian landscapes, to pictures of the Sussex landscape, pictures by Sussex artists and finally non-Sussex artists as well. The abstract artist William Gear (1915 – 1997) was an important influence as curator in the 1950s and 1960s. The gallery houses the largest and most significant body of work by Eric Ravilious. In 2007 the gallery was awarded £1million from Art Fund International to purchase international contemporary art.

The top, second floor, houses the cafe and the space where temporary exhibitions were put on. When we visited it was full of Other Side by the Berlin-based Japan-born performance and installation artists Chiharu Shiota. The installation consists of a labyrinth made from strands of black wool which have been linked together to form a three-dimensional structure at once transparent yet dense (the installation took 15 people 10 days to install). Five doors lead into this labyrinth, this emotional space and each door comes from East Berlin and has its own story. In a sense, it looks like something out of Harry Potter or Alice in Wonderland. For Shiota, the intention is to explore the themes of remembrance, oblivion, dreams and sleep. The gallery had a display board with information about the installation, but the gallery staff was friendly and helpful and spent some time chatting about the art work.

On the floor below are the galleries which display work from the Towner Art Gallery’s own collection, plus the rooms used by the education team. There was a single exhibition, Wonderland which was inspired by Shiota’s installation and consisted of the Towner’s own works selected to explore themes of landscape, space and architecture. The works on display included a pair of new acquisitions, Peter Liversedge’s (born 1973) Winter Drawings from 2010, two pictures of huge bare trees executed in black masking tape to give stark, detailed images which drew you to them. 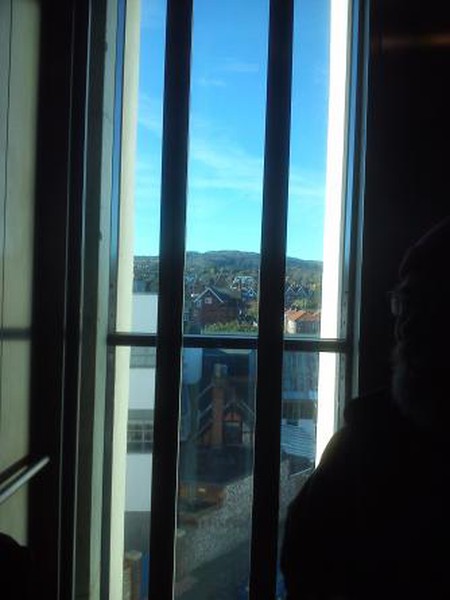 The display ranged widely, but each image seemed to create its own landscape, whether real or imaginary. Eric Ravilious’s wood engravings were fabulously detailed (and linked to the Ravilious exhibition at Pallant House in Eastbourne). Alan Reynolds (born 1926) was a name new to me, his Moonlit Orchard from 1957 was a magical watercolour in black and white. With Victor Passmore (1909-1998) we were able to see his 1950 picture Sun over Cliffs which contrasted with the two later images on display.

Elizabeth Magill’s (born 1959) Overhead III was an oil of overhead power cables, a view at once unspecific yet almost a landscape in its own right. Test of Courage (2000) by Rut Blees Luxemburg (born 1967) is a photographic print which takes a small detail of a London street and makes it a complete landscape, making the ordinary and familiar into something theatrical. Other artists included in the exhibition included Julian Opie and Langlands and Bell, as well as an abstract by Sir Thomas Mornington (1902 – 1976), who taught artists such as Euan Uglow at the Slade.

In one of the galleries there was a table and seats with a selection of monographs on the artists in the exhibition, inviting you to sit and read further about the works and their makers.

The gallery has a lively programme of talks with from artists and from curators. The gallery’s collection runs to around 4000 works and there are regularly tours of the Collection Store on alternate weekends.