Six Reasons Manchester is The Perfect City for Students 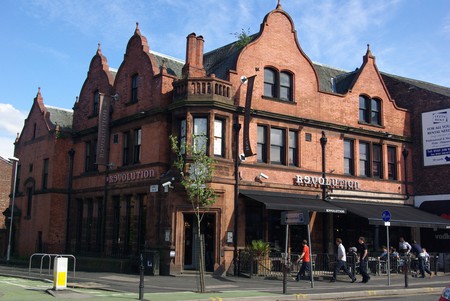 Thanks to the abundance of higher education options in the city, Manchester is home to the highest number of students outside of the capital. With students attending the University of Manchester, Manchester Metropolitan University, RNCM and the University of Salford just over the river, over 100,000 students live in and around the city. Thinking of making Manchester your university city of choice? Here are eight reasons why we think it’s one of the best cities for students in the UK.

Manchester’s restaurant scene is thriving with new street-food markets, fine dining establishments and quirky cafes opening every week – but it’s the abundance of affordable eateries that make the city a great choice for students. Whether you’re looking for cheap vegetarian grub, a quick and easy rice-and-three in the city centre or the best pizza in the city, you can head out for a bit to eat and return home with change from a tenner.

From the Warehouse Project to good old fashioned house parties, Manchester is well known for being a great night out. Every night of the week you’ll find something for every music taste, from small local gigs to urban dance halls and fully fledged raves. Most student-centric venues have drinks offers and themed nights aplenty, and there’s always the option of delving deep into the Northern Quarter to discover hidden bars.

Manchester might not be the cheapest city in the country for renting, but compared to London it’s definitely affordable. Those with a little more money might decide to reside in the city centre, but any student watching their pennies can locate themselves in the Fallowfield/Withington area for cheap rent in a shared house.

Boasting one of the busiest bus routes in Europe down the Oxford Road corridor, you can always find a bus home at the end of the night in Manchester. The recently expanded tram network makes it even easier to navigate the city, as do the newly improved cycle lanes. Fancy a trip outside the city? Victoria and Piccadilly train stations are both well connected to the rest of the UK, helping you to reach the likes of Leeds, Liverpool or the Peak District within an hour’s journey.

A post shared by Manchester Evening News (@manchestereveningnews) on Oct 25, 2016 at 2:28pm PDT

From the best of the high street on Market Street and in the Arndale Centre, to the Northern Quarter’s independent boutiques and the choice of Selfridges or Harvey Nic’s for a more special purchase, you’ll never get tired of spending your student loan in Manchester. Sick of the city centre? Hop on the bus over to the Trafford Centre if you fancy a change of scenery – you’ll find the biggest Topshop outside of London alongside all your favourite haunts.

Students flock from all over the country to attend Park Life festival each summer, an experience that is all the more better if you’re living in the city and can slip into your own bed following the after-parties. This year’s festival sees The 1979 and Frank Ocean headlining a curation of the hottest bands and best international DJs.

Looking forward to these two join us again…