Roy Lichtenstein's 'Whaam!' Back on Display at Tate Liverpool 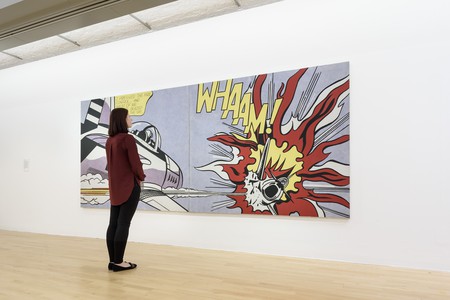 If you do one thing this spring, go see Roy Lichtenstein’s Whaam! (1963), which recently went on display at Tate Liverpool as part of the gallery’s 30th anniversary.

Arguably the American pop artist’s most famous painting along with his Drowning Girl (1963), Lichtenstein’s Whaam! has been on public display pretty much constantly since it was purchased by the Tate in 1966.

Based on an image from DC comic All American Men of War, Whaam! represents Lichtenstein’s fascination for the detached treatment of emotionally charged subjects such as war, love and hate in mass-produced graphic cartoon imagery.

As with his other pantings that used appropriated imagery from comics or advertising, Lichtenstein amended the original composition, altering perspective, colour scheme and choice of text. Composed over two canvases, Whaam! condenses the intensity of the original comic image to really focus on the explosion and the choice of parodying idiom.

Retaining the same style of commercial printed media, Lichtenstein painted every dot and line by hand. By doing this, the artists subverts the aesthetic processes of four-colour separation, so the once technologically rendered images reverted to the action of the artist, the individual. 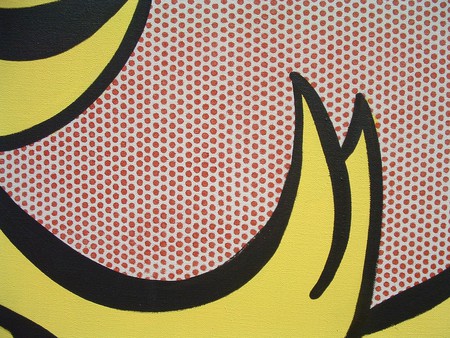 Detail of Roy Lichtenstein, We Rose Up Slowly, 1964 | © Max Braun/Flickr

Painted in acrylic, which had become the paint of choice among many artists from the 1950s, Whaam! is one of the first artworks of its generation requiring conservation. Over many months scientists at the Centre for Colloid and Surface Science in Florence, Italy, and Tate conservators trialled a variety of cleaning techniques. Due to the challenging and unpredictability of the contemporary media, a new gel has been developed based on nanotechnology called ‘Peggy 6’, which has allowed the conservators to remove unwanted dirt and soiling so the painting could be returned to its original vibrant glory.

‘The research, analysis and scientific evaluation required for a complex large-scale treatment such as Whaam! has involved hours of painstaking work and sustained collaboration across specialist teams,’ said Tate’s principal conservation scientist, Bronwyn Ormsby. ‘The greatest reward is seeing Whaam! revived. The colours are brighter and more true to how they were when originally painted, the lines are more crisp and the Ben-Day dots positively zing off the surface.’ 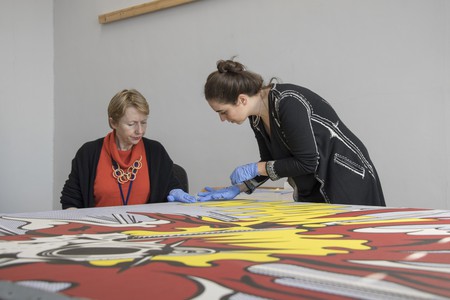 Want to see more major art events from around the world? Check out Katharina Grosse’s mega installation at Carriageworks in Sydney.