From Refugee to the Champions League

While Manchester City striker Nadia Nadim may be a world-class footballer, her path to international stardom is far from the ordinary.

Battling it out for the league title is the norm for Manchester City Women. Last season they were pipped to the title by Chelsea, the year before the roles were reversed and, at the time of writing, the two clubs make up the top two places of the Women’s Super League again.

Among Manchester City’s squad is their 30-year-old Danish striker, Nadim, a high-profile signing in January of this year who appears settled in England’s north-west and scoring goals, and while the club making big signings is nothing new, Nadim’s journey to Manchester City has been anything but ordinary. 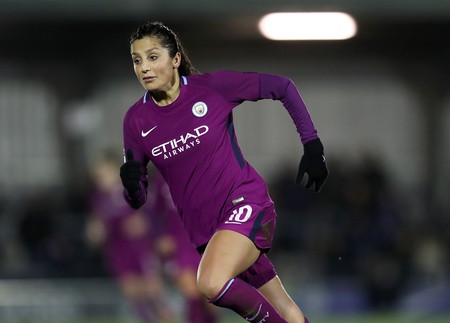 Nadim made her international debut for Denmark in 2009. Since then she has amassed 75 caps and scored 22 goals along the way, but these achievements are not for the country of her birth because Nadim was actually born 5,000 kilometres away in Afghanistan. Born in early 1988 in Herat, a city in the north-east of the country, Nadim was raised along with her four sisters by her mother and father until, when she was 12, her father was killed by the Taliban. He had been a general in the Afghan National Army (ANA) until his death in 2000 and his execution led to Nadim and her family fleeing to neighbouring Pakistan as a result.

Pakistan was the stop-gap and soon after arriving, the family headed to Italy. From there the plan was to travel by truck to London, but, unbeknown to them, they were actually taken to rural Denmark and sent to a refugee centre. It was in Denmark that Nadim discovered football. Having never played the game before, it suddenly provided some respite away from everyday life.

Denmark has, for a long time now, been one of the leading nations in terms of women’s football, along with the rest of Scandinavia. While Germany have been the dominant force in European football, Norway, Sweden and Denmark have all made finals in major championships. Norway have also recently announced that their women’s and men’s national team players will receive equal pay from now on. Whether Nadim would have had football come into her life had she stayed in Afghanistan, or even made it to the UK, where she expected to end up, is impossible to tell, but Danish football is glad that they have her. 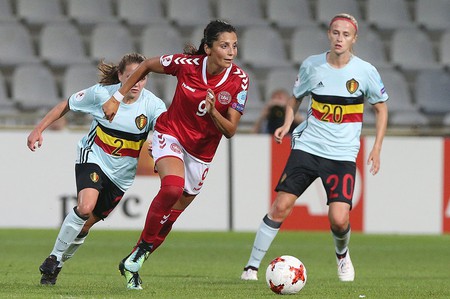 Playing for Denmark against Belgium | © REX/Shutterstock

Nadim worked her way through the ranks of Danish football, playing for B52 Aalborg, Team Viborg, IK Skovbakken and Fortuna Hjørring, but didn’t turn professional until she headed to the United States and New Jersey, signing for Sky Blue FC. Two successful years led to a trade to Portland Thorns, where she finished as the side’s top scorer, helping them to win the NWSL Shield.

Now back in Europe, Nadim has her sights on winning the Champions League, which means toppling the back-to-back champions, Lyon. But her ambitious nature goes far beyond trophies. Nadim is currently studying to become a plastic surgeon, attending university remotely while continuing with her football career. The goal is to practise in reconstructive plastic surgery once her career in football comes to an end.

Where that work will take her, who can tell? Her peripatetic life thus far has been partially forced upon her, but also down to her own ambitions. The nine languages that she speaks (Danish, English, German, Persian, Dari, Urdu, Hindi, Arabic and French) could lead to her heading to various parts of the world, and potentially back to her home country. But for now, in 2018, the focus lies on on regaining the WSL title and conquering Europe. There’s every chance her life after that will be every bit as extraordinary as it has been so far.