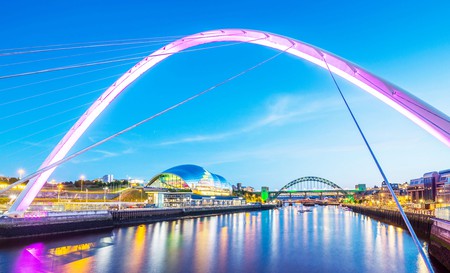 It’s no secret that the residents of Newcastle upon Tyne like a tipple or two and, quite rightly, the lively northeastern city has a great community of pubs and cocktail bars. Whether local ales in a traditional pub whets your whistle, or a classy gin bar is more your scene, our guide to Newcastle’s top pubs and bars will help you find your new ‘favourite’ watering hole. 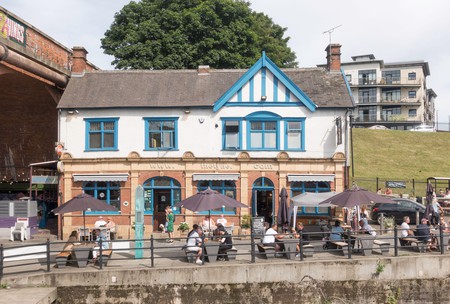 The Tyne Bar is one of the city’s premier beer bar destinations. In addition to serving a good range of draught and bottled beers from around the world, including brews from Sweden’s Spendrups Bryggeri and Germany’s Erdinger Weißbräu, The Tyne is also Northumberland-based Wylam Brewery’s official brewery tap in the Newcastle and its Gold Tankard ale is available year-round alongside rotating guest Wylam ales. The Tyne’s location in lovely Ouseburn, regular free live music and a number of tasty pub grub-style bites are an added bonus. 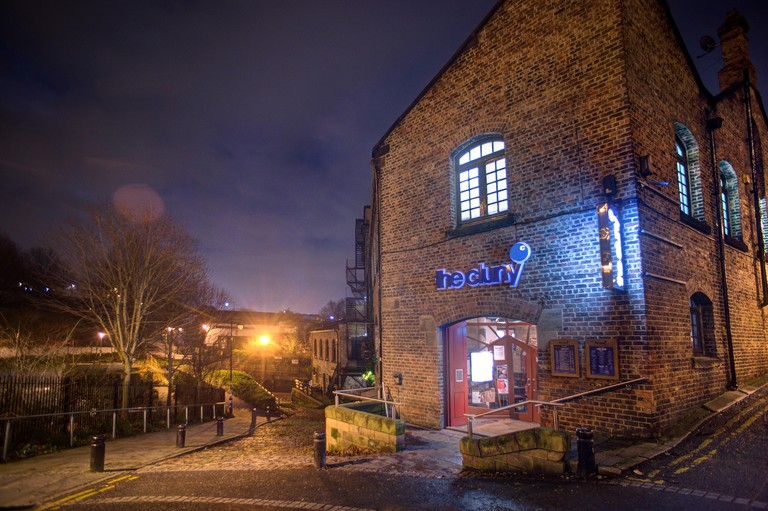 © Peter Atkinson / Alamy Stock Photo
Operated by the Head of Steam pub group, The Cluny is a pub located in a former mill and bottling plant dating back to 1848 in Newcastle’s picturesque Ouseburn Valley. Alongside an impressive number of real ales and craft beers, the venue also hosts regular on-site beer festivals. A number of cask conditioned ales and bottled beers are served and available to take home too, with varieties like Copper Dragon’s Challenger IPA, Black Sheep Bitter and High House Farm Brewery’s Nel’s Best. In addition to being a beer drinkers’ oasis, The Cluny is also one of Newcastle’s premier music venues, whose roster of past performers has included Seasick Steve, Daniel Johnston and The Vaccines. 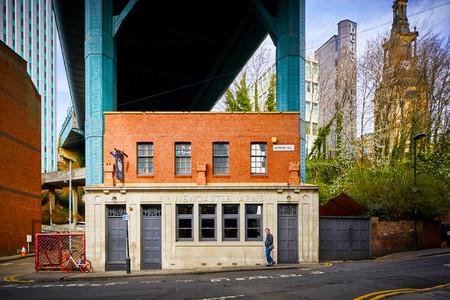 Nestled in the shadows of Newcastle’s iconic Tyne Bridge, the aptly named Bridge Tavern is a brewpub and restaurant. Though the current building it calls home was rebuilt after the construction of the bridge, the site has acted as an alehouse for almost 200 years. Featuring its own on-site microbrewery fully viewable from its ground floor room, The Bridge Tavern serves its house-brewed bespoke ales alongside other offerings like Marble Brewery’s Bohème and Lagunitas IPA. Taster planks are available and a charming terrace is great for a few beers in summer under the shadow of the Tyne Bridge. 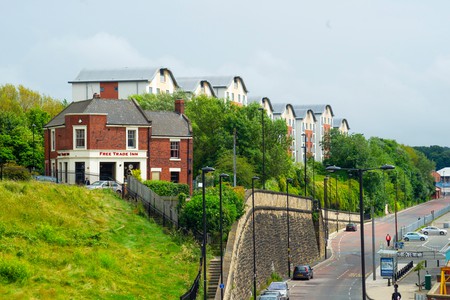 Just a stone’s throw from The Tyne Bar, with beautiful views over the Tyne River, is The Free Trade Inn, a rustic establishment and one of Newcastle’s oldest pubs that proudly champions locally brewed ales. Numerous awards including CAMRA’s Tyneside Pub of the Year in 2013 are well-deserved, with a beer menu that includes local gems like Wylam Brewery’s Jakehead IPA and Northern Alchemy’s Dark Chocolate and Mint Milk Stout alongside draught, bottled and canned beer from further afield. 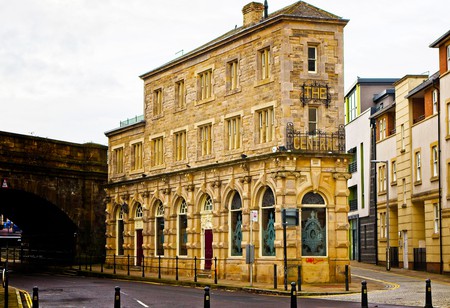 Not technically a Newcastle pub, but its location at the Gateshead end of the Tyne Bridge and its great range of beers make The Central Bar a worthy mention nonetheless. Located in a stunning 1856, wedge-shaped building, with an original curved bar, it is also owned by the Head of Steam group and features a beautifully renovated bar area, two upper level function rooms where live music acts often perform and a gorgeous new rooftop terrace perfect for al fresco beers in summer. Bar nibbles, classic pub dishes, burger and hot dogs are served alongside brews such as Allendale Brewery’s Far Far Away IPA and The Five Points Brewing Company’s Hook Island Red.

Pleased To Meet You 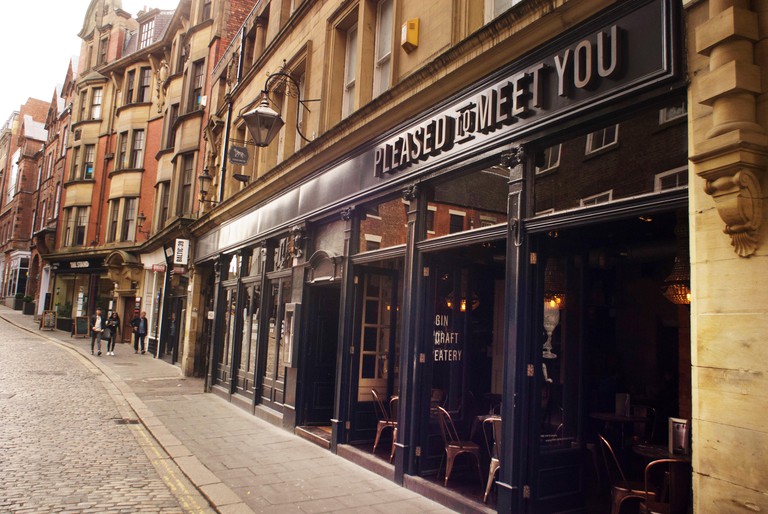 © Peter Atkinson / Alamy Stock Photo
Since it opened in 2013, Pleased To Meet You, a beautifully designed cocktail bar and restaurant specialising in gin-based concoctions, tucked away on a historic cobbled side street in the heart of the city, has quickly become a favourite haunt of local cocktail connoisseurs. Featuring beautiful chandeliers and sumptuous leather seats mixed with exposed brickwork and girders, the bar is a mix of classic elegance and industrial-chic, a sophisticated space in which to enjoy its specialty gin cocktails, like Bloody Gin Julep and the signature Pleased To Meet You No1. Other classic and craft cocktails are served alongside beer, fine wine and a good number of whiskies.

Quite possibly one of the most uniquely designed venues in the local area, As You Like It is a beautiful four-floor establishment featuring four stunning bars and a charming garden terrace located in the lovely, leafy Jesmond suburb just north of Newcastle city centre. Its quirky, cosy interior features an offbeat mix of vintage inspired shabby-chic designs and a gloriously opulent ambience in which to enjoy its classic and craft cocktails. Try the White Chocolate Raspberry Bakewell, a mix of raspberry vodka, Amaretto, raspberry liqueur and cranberry juice topped with white chocolate foam, or a classic old-fashioned or martini.

Originally started in the picturesque coastal town of Tynemouth, the owners of Lola Jeans branched out in late 2014 opening a location on Newcastle’s Market Street. Already receiving rave reviews and attracting a steady clientele, Lola Jeans features a beautiful interior created by co-owner Lindsay that is a relaxed neighbourhood cafe by day and stylish speakeasy inspired cocktail bar by night. Expertly crafted cocktails draw on classic recipes and local influences with signature creations like Lola’s Sling, fresh pineapple juice, premium gin, lime, cherry liqueur and Benedictine, and can be teamed with dishes from a menu inspired by delicious American comfort food.

A casual, late-night bar based in the city centre, Alvino’s is one of Newcastle’s most popular cocktail joints. Deceptively small from the street, Alvinos’ entrance hides a sprawling three-level property full of cosy and quirky areas, retro games like pinball machines and foosball and a popular outside terrace. Fans of kitsch will love its cute cartoon-cocktail menu brimming with interesting concoctions like the Pink Gringo (tequila, aperol, ruby grapefruit, raspberry jam, egg white and lemon) and Chivas Me Timbers (Chivas Regal 12, dark cacao, whiskey and liquorice bitters, absinthe and barrel-aged sugar). 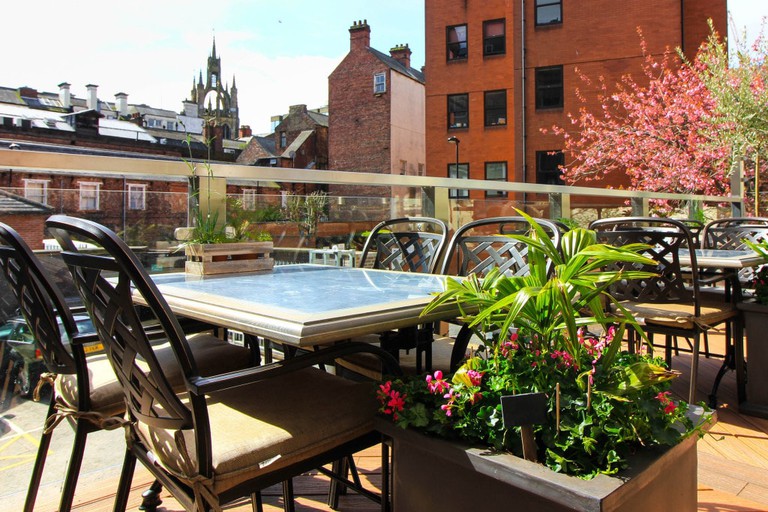 Courtesy of Barluga
Barluga is a classy bar and restaurant serving a first-rate cocktail list, plenty of fine wines and delicious modern British comfort food. Based in a former bank, it features an open kitchen, mezzanine level, charming terrace to the back and street side patio seating perfect for indulging in a few cocktails and a spot of people watching. Team cocktail options like Tom Collins, watermelon mojito and passion fruit martini with bar food bites like sweet potato fries, Lindisfarne oysters and rosemary-studded baked camembert.
Give us feedback