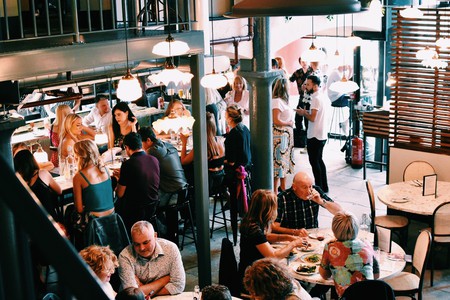 Maray serves up fun and inventive dishes, without being pretentious | Courtesy of Maray

Beirut via Paris might not seem an obvious place for young Scouse chefs to look for ideas. But as Dan Hancox discovers, this city has always looked outwards for inspiration. 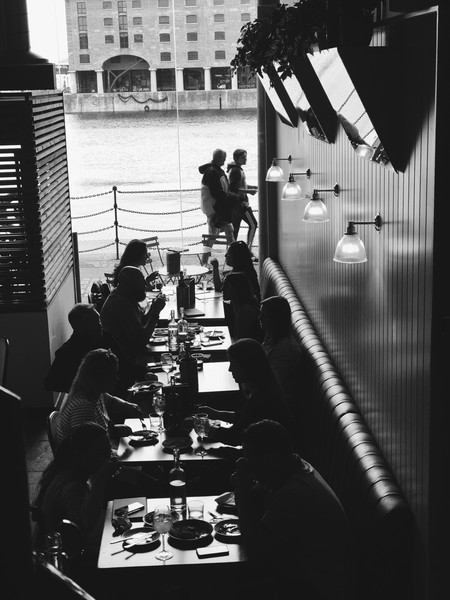 It’s not often that a cauliflower can be called iconic, but then, this is no ordinary cauliflower. For Liverpool‘s Maray restaurant, the eye-catching ‘disco cauliflower’ has become the stuff of legend – it is boiled whole in turmeric and salt water, deep fried for crispiness, and then sauced, garnished and plated in a manner that would not be out of place in Studio 54. Its psychedelic toppings are herby chermoula, nutty tahini, warming harissa, yoghurt, fresh pomegranate, flaked almonds, paprika and parsley. It is a dazzling combo of heat, garlickiness, the mellow-but-moreish bitterness of the cauli, and a sweet fruity finish. Somehow, none of these bold sauces and garnishes overpowers each other.

It has become a Maray trademark, an emblem of their adventurous, hyper-modern, broadly Middle Eastern-inspired fare. Their greatest assets are vegetable-focused small plates that are fun and inventive, without being pretentious, and enticingly flavour-packed, without resorting to the cheap and dirty clichés of ‘vegan junk food’.

On my third visit to Maray in just over a year – which is saying something when you live 200 miles away – I plunged into a mezze of dense whipped goat’s cheese with pitta chips and pickled apricots, fiery muhammara (a divine Levantine walnut and red pepper dip), and torched broccoli with preserved lemon and pumpkin seeds. Our meal then took a seaside detour to some perfectly battered, melting-soft cod cheeks with pea mao and curry salt. The highlight of the night, however, was an ‘aubergine shawarma’, topped with tahini, date syrup and crispy shallots – deeply smoky and bursting with spices and umami, complex and addictive as hell. A plausible rival for the disco cauliflower’s throne. 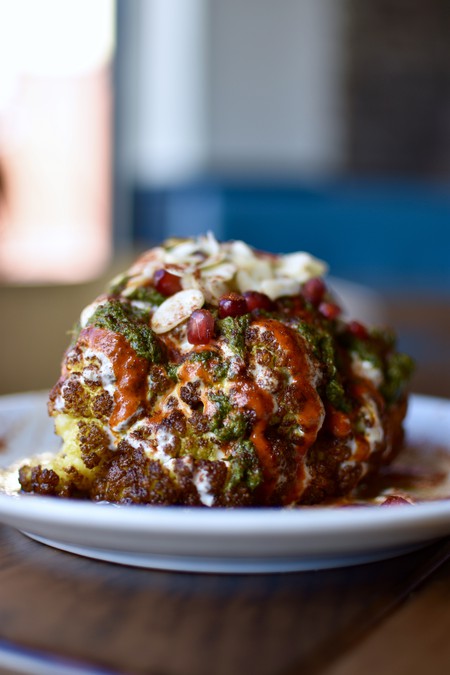 In its short life, this restaurant has become something of a phenomenon in Liverpool. This summer they opened their third site there in five years – in the grand, high-profile red-brick location of the Royal Albert Dock, a stone’s throw from Tate Liverpool. They are now looking beyond their hometown, at possible locations in Manchester.

For Maray co-founder Tom White, it has been an exhilarating journey, and one which began not in Liverpool, or Beirut for that matter, but in the winding backstreets of Paris. He and his friend Dom had a background in bartending and cocktails, their friend James had worked in kitchens, and while on holiday in the French capital, the three young Brits fell in love with the Marais, finding inspiration in the fourth arrondissement’s unlikely combination of food and drink. “It’s a really beautiful area, this unique and vibrant knot of streets – there’s a big Jewish community there, and they serve the most amazing falafel in the world, alongside these amazing cocktail bars and wine bars.” 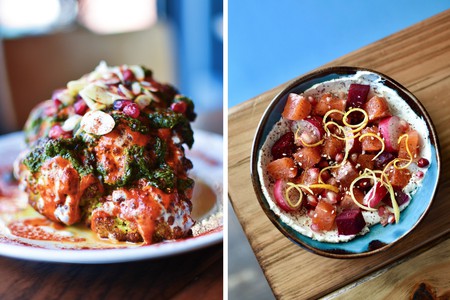 Maray’s cuisine is hyper-modern and adventurous | Courtesy of Maray

Returning to Liverpool, the trio decided to open a casual food spot, serving Middle Eastern dishes in an informal setting, with a cocktail bar underneath. Due to a mixture of happy accident and tricky planning laws, they ended up “melding the two together,” and in 2014, Maray opened on Liverpool’s buzzing Bold Street. “It was so spit and sawdust, we had a shoestring budget – and we were very lucky to find a unit there. I was looking at our original menu the other day, and I can’t believe we got away with how little was on it,” White laughs. “It was basic, but we took a lot of care, and it got us a lot of attention, if only because there weren’t really people in Liverpool doing that sort of thing in 2014. I say the term ‘small plates’ slightly through gritted teeth, because it’s so ubiquitous now, but that’s what it was.”

Their minimal first menu focused on spectacular falafel wraps, with bread delivered daily from a Lebanese bakery in Manchester, and whole-vegetable dishes like the cauliflower. Their unusual USP was ‘falafel and cocktails’ – which raises a question I never thought I’d ask: what’s a good cocktail pairing for a falafel? “To be honest, if you’ve got something salty, anything sharp and fresh is going to go with it. With a falafel, which is kind of nutty and aromatic, personally I like a short, fresh drink like a daiquiri.” 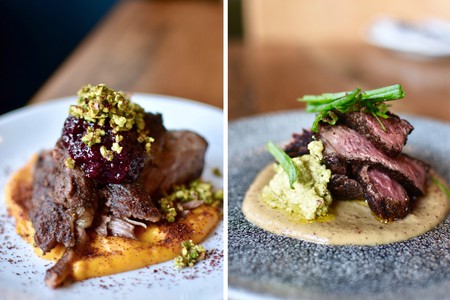 Though their meat dishes like the rump steak and lamb shawarma are spectacular, there’s plenty of choice for vegan diners | Courtesy of Maray

Five years and two more openings later, Maray’s menu remains as thrilling for vegans as it does omnivores. “That wasn’t ever a conscious decision,” says White. “It’s just that vegetables are used so much in Middle Eastern and North African food, and our chefs have always really enjoyed working with them.” Realising they had numerous meat-free items on their menu already – and a few more that could be very easily ‘veganised’ – they introduced a dedicated vegan menu, and have never looked back.

A glowing review from Jay Rayner in The Guardian in 2016 helped them reach a whole new demographic, not to mention a national audience. But it has always been their support from the city of Liverpool that has helped them gain confidence, and grow so fast.

“Liverpool’s fiercely independent, it’s very friendly, and it’s also very close-knit,” says White. “If you do something in Liverpool and you care about it and you’re clearly passionate, the city really gets behind it.” It is, he says, that much more intimate, because it’s so compact – “you can kind of walk across it in 15 minutes” – and the fact that it is historically a port city, and looks out to the world, has meant it’s always been a melting pot, too; something which is reflected in a diverse restaurant scene.

“The food scene’s developed a lot in the last five years,” White reflects. “There’s been a slew of really strong new openings. We owe a lot to the city, and its food-loving community, for really supporting us – it’s a very loyal place.”

This spirit goes back to their opening in 2014 – the city is so tight-knit, they didn’t really bother with any serious marketing for their launch; no social media influencers, no gimmicks. White found a mirror in the basement of the restaurant, wrote ‘falafel and cocktails’ on it with blackboard paint, and put it in the window. Just from the footfall on Bold Street, and the power of Scouse word of mouth, they became a hit. “That was the extent of our marketing,” he laughs. “You wouldn’t get away with that in London.” 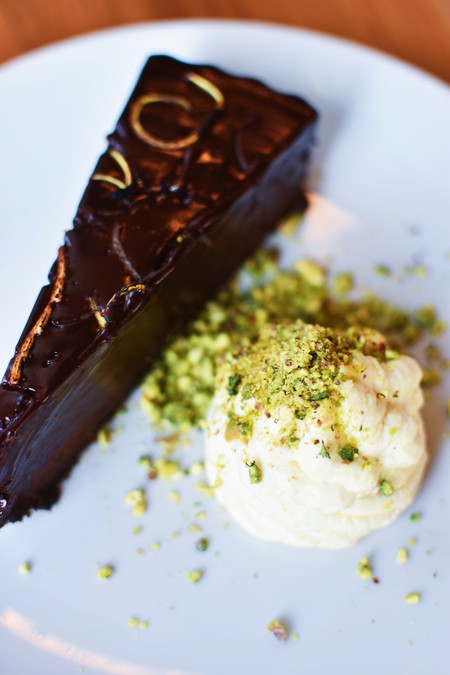