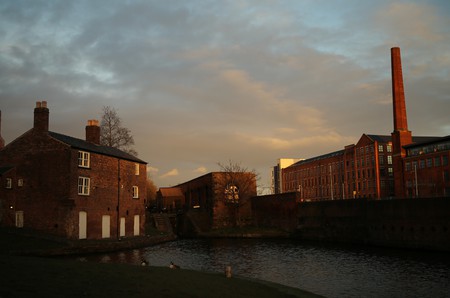 One of Manchester’s neighbourhoods has been voted the hippest neighbourhood in the UK – and it isn’t the Northern Quarter! The city’s hub of all things cool made it to number nine on the list curated by Travel Supermarket, pipped to the post of the covetable title by its neighbour, Ancoats.

Leith in Edinburgh and Digbeth in Birmingham came in second and third in the vote, both neighbourhoods that have long been associated with hipster happenings. Ancoats however (which also came third in the European list!) is very much an up-and-coming district that still has lots of potential to evolve.

The vote was rated on three attributes: high culture outpost, creative capital and traveller value. Although the other two factors scored high, it was the area’s creativity that secured it the number one spot. Read on to discover the reasons why Ancoats is currently at the height of hip.

One of the most picturesque areas of the city centre, Ancoats has undergone extensive regeneration over the past few years, fusing the old with the new. The textile mills and canals that have been around for decades have been brought up to date with new apartments, hip cafés and even a wharf home to a cluster of house boats. Take a stroll along the canal or down at Cotton Field Park at sunset to fill up your camera roll with plenty of snaps.

There seems to be new cafés and bars popping up every single day, especially around Cutting Room Square, the hub of the neighbourhood. Caffeine addicts flock to Ancoats Coffee Co. while those who prefer tea opt for Cha-ology which specialises in Japanese tea. Se7en Brothers Beerhouse serves up their own brews, and the General Store is the place to do your grocery shop if you have a thing for packaging.

Probably the first reason that anyone takes their first tentative steps away from the Northern Quarter into Ancoats, Rudy’s is fast gaining a reputation for serving the best pizzas in town. You’ll have to queue around the block to get a table, but it’s more than worth it for these simple but fabulous (and surprisingly affordable) Neapolitan pizzas.

There’s street art wherever you look in Ancoats, providing Instagram opportunities a-plenty while showcasing the creativity of the area. The Guardian of Ancoats, a vibrantly hued bird that takes up the side of an entire building on Great Ancoats Street, welcomes you into the neighbourhood, but you’ll find much more to discover, especially around Cutting Room Square.

You can live in an old textile mill

Ancoats has a history steeped in the Industrial Revolution, and rather than knocking down the relics of the old city, developers have invested in the beautiful old mills to transform them into stylish apartments. If you’re young and hip, chances are that you’ve already been living in an old mill in Ancoats for years, just waiting for the gentrification of the area to begin.

There’s plenty of artist’s studios and creative spaces in the area, but Hope Mill stands out as one of the most important. First and foremost an independent theatre housed within an old mill, there’s also a variety of interesting workshops, studio spaces and even a cool café inside. This is where to head if you’re sick of the bustle of the Northern Quarter and seek a return to exposed brickwork, great coffee and a place where you can hear yourself think while you create.