The Most Historic Pubs In Manchester, England

Manchester, like many British cities, has plenty of historic pubs. If you’re in this powerhouse of the north, make sure to stop by one of the below for a history-soaked pint or two.

The population of Manchester grew tenfold during the Industrial Revolution; pubs sprouted up in the 18th and 19th centuries to feed and water the growing number of workers with increasing disposable incomes. Today, those historic inns retain plenty of original features, but often with updated décor and forward-thinking menus. Culture Trip checks out the best and most historically significant pubs in Manchester city centre to visit today. 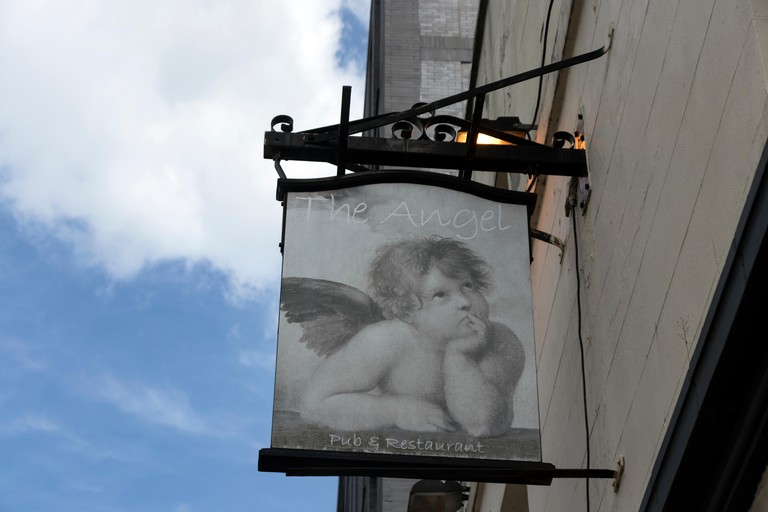 © Steven Bennett / Alamy Stock Photo
A map from 1851 shows three pubs squashed into the same junction. Now only the Angel survives, its cream walls and straggle of unpruned wisteria overshadowed by apartment blocks and glass-walled towers. The NOMA area of northern Manchester around Angel Square has been redeveloped in recent years to the tune of £800m and the pub is now handy for local office workers. The stylish, airy interior has a contemporary feel, but the wood floors, log fire, old photos of Manchester on the walls and often-played piano in the corner make sure it doesn’t lose any old-school charm. There are burgers and characterful beers from great Northern breweries, like sour-caramel blonde White Lion from Huddersfield’s Empire or rich, dark Triple Choc from Shipley’s Saltaire Brewery. There’s also a serious Monday-night quiz and a big grassy beer garden out the back. 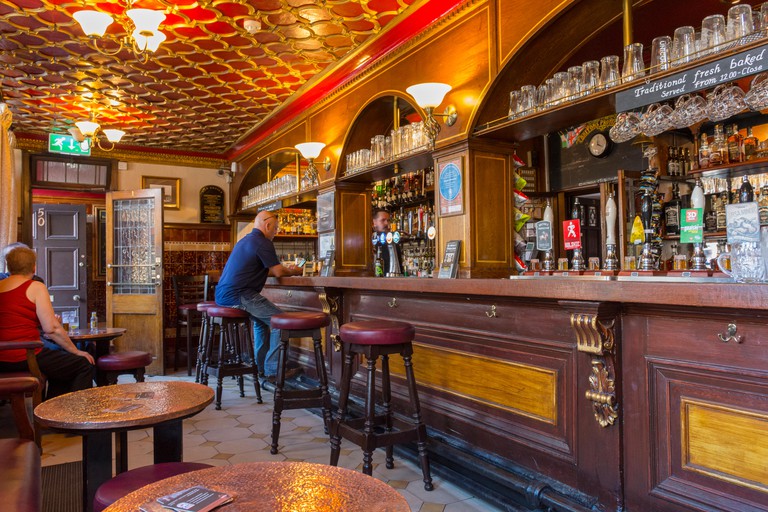 © lowefoto / Alamy Stock Photo
The Peterloo Massacre of 1819, when sabre-waving cavalry charged into a crowd of protestors, unfolded just up the road and the Britons Protection has a series of faded murals in the tiled corridor to commemorate the event. The pub has stood on its current site since 1806, with the unusual name suggesting it was once an army-recruitment centre. Manchester’s gleaming world-class venue, the Bridgewater Hall now stands immediately opposite, making the slate-roofed pub a favourite with musicians from the Hallé and BBC Philharmonic orchestras, as well as concert-goers enjoying a pre-show pie and pint. Inside, six rooms preserve moulded ceilings and copper fireplaces from the 1930s. The comfy sofas are perfect for settling into with one of the 300 whiskies on offer – perhaps an oak-and-ginger sweet Aberfeldy or a smoky triple-matured Laphroaig. 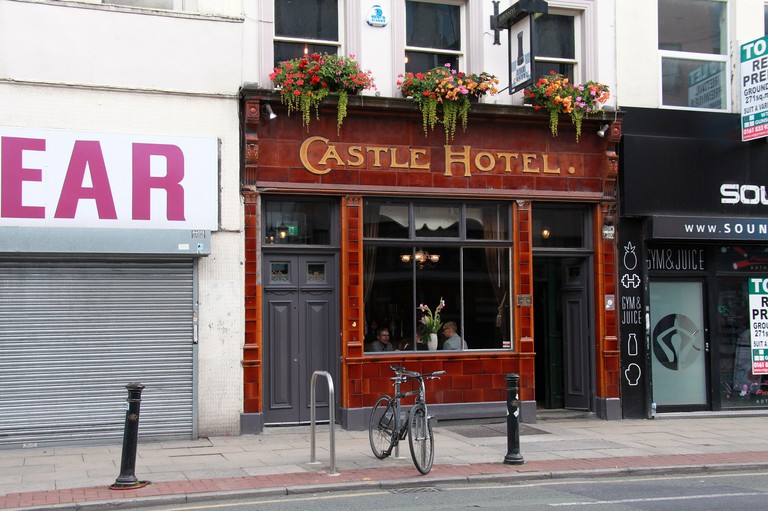 With a packed music schedule and glossy brown tiles, The Castle Hotel on busy Oldham Street stands out among Northern Quarter watering holes. It’s been open since 1776 and the restored interior is a fine example of Victorian-pub décor – all patterned ceilings, stained-glass doors and old fixed seats as well as an ornate ceramic bar (one of only a handful in the UK). It’s a three-minute stroll around the corner from the Band on the Wall venue for comedy and gigs. Since 2010, the adults-only pub has an on-site music hall, becoming a creative hub for budding Mancunian talent and bands from further afield.

Bar, Pub, Pub Grub, Beer, British, $$$
Facebook
Email
Twitter
Pinterest
Copy link
Share
Map View
Fine brickwork and hanging baskets welcome you into The English Lounge. Inside, you can relax among leather sofas, bookshelves, dark woodwork and prints on the walls, while the menu is full of hearty pub grub, including scampi with tartare sauce and beer-battered onion rings, fish and chips, hunter’s chicken, chocolate fudge cake and sticky toffee pudding. The simple fare and High Street location pull in families and people passing by rather than students or rowdy regulars. The drinks menu is mostly trad, too, with pints of IPA, fruity bottles of Argentinian Malbec and Italian fizz and a nice line in spirits and cocktails, featuring classic Moscow mules and mojitos or rhubarb gin and Cazcabel honey tequila. 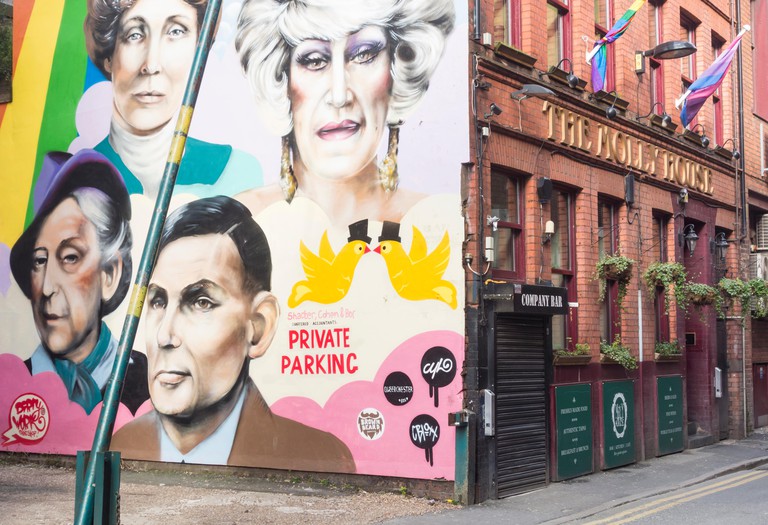 In the 18th century, a molly house was a pub or coffee shop where gay men could meet. The Molly House pub in Manchester is a welcoming flower-decked, red-brick bar, embracing all drinkers. It stands on a narrow lane, parallel with Canal Street, in Manchester’s Gay Village. There’s a low-lit “tea room” with barrels for tables, a lace-curtained “bordello” and an outdoor veranda, all decorated with vintage shabby-chic details. The tapas menu – good for sharing with a few drinks – lists pomegranate tabbouleh, sweet-potato falafel and marinated octopus. Ales on tap rotate local guests, such as creamy pints from the Beartown Brewery in Cheshire, plus bottled beers from around the world, including strong, flavour-layered triples. 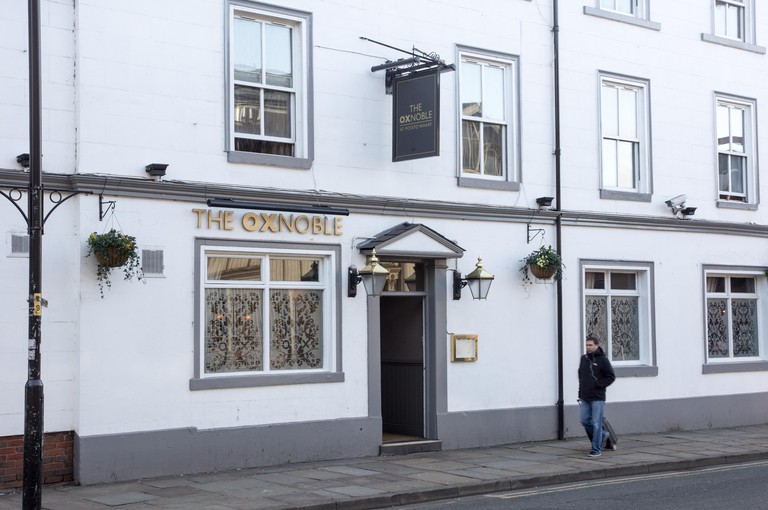 © Jonny Abbas / Alamy Stock Photo
There’s a big choice of build-your-own burgers on the menu at this friendly, unpretentious pub, all served with onions, gherkins, iceberg lettuce, ketchup and chips. Taking its name from a now-extinct Georgian variety of potato, The Oxnoble has a unique charm and has served up beer in central Manchester since it opened in 1804. Now sandwiched between the Science and Industry Museum, the Crystal Maze experience and the remains of the Mamucium Roman Fort, it makes a good place to recharge your batteries on a day out – they even do kid-friendly food.

Peveril of the Peak 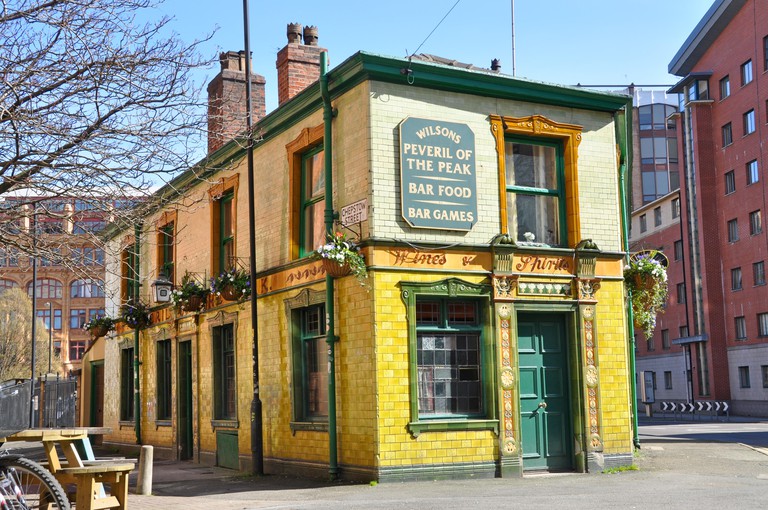 © Roger Cope / Alamy Stock Photo
Come in summer, when the emerald and chartreuse tiles and art nouveau lettering are especially eye-catching, and the colourful baskets of petunias are in full bloom. On an urban peninsula in the Rochdale Canal, between Chepstow and Bridgewater Streets, the building dates to the early 19th century and its grand interior is still full of dark wood, coloured glass and cast-iron fireplaces. The table-football table was brought into the pub in 1955 and is said to be the oldest continuously used example in the UK. Regular beers include fresh, citrussy Odin Blonde from the local Brightside Brewery and dark, hoppy Plum Porter from the Titanic in Stoke-on-Trent. 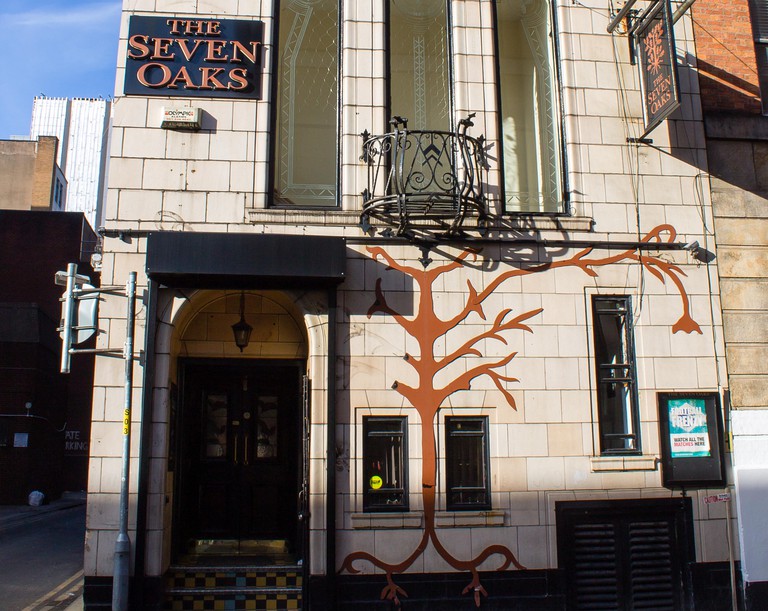 © Juha Remes / Alamy Stock Photo
Just around the corner from the neoclassical hulk of Manchester Art Gallery, this little sports bar on the edge of Chinatown screens all kinds of matches on several large HD TVs. The property has a traditional 1920s vibe with art-deco features (wrought-iron, arched windows, stained glass) both outside and in. When there is a big football fixture, it can get busy; other times, the cheap pizzas, two-for-one beers and free comedy nights (on Tuesdays) keep it buzzing. 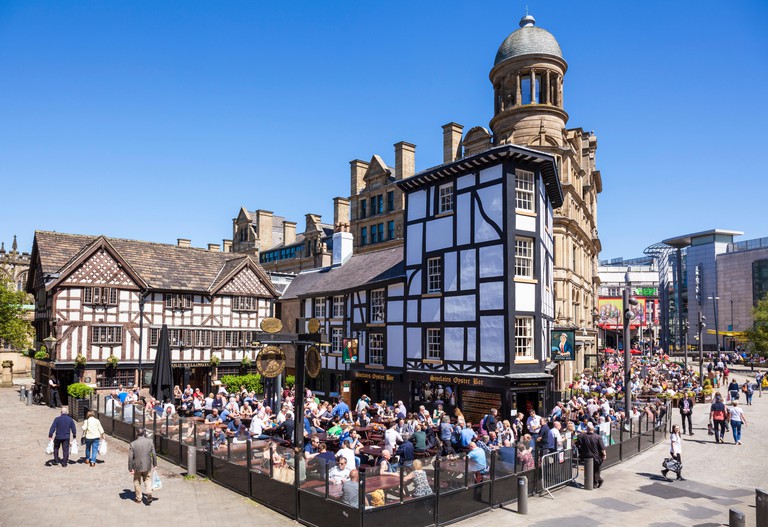 © eye35.pix / Alamy Stock Photo
With a big, paved beer garden and comparatively cheap drinks, Sinclair’s Oyster Bar is one of the most popular pubs in the city and it can be tricky to find a seat, particularly on football-match days and when it’s sunny. The mock-Tudor walls, painted to look half-timbered, hide a genuine, if extensively rebuilt, 17th-century inn with some early-Victorian chop-house fittings. As one of oldest oyster bars and chop houses in England, it’s a historically intriguing building in its own right, right on picturesque Shambles Square, an old meat market revamped in 1999, near the River Irwell and cathedral. Tuck into a pint of Taddy from Samuel Smiths, a steak-and-kidney pudding or a blackberry-and-apple crumble and watch the world stroll by along pedestrianised Cateaton Street.
Give us feedback