It may not occur to visitors staying in this gorgeous little country to look further than the capital city, but Luxembourg has much more to offer. Even a small portion of Grand Duchy is brimming with opportunity; the Mullerthal Region, also known as Luxembourg’s ‘Little Switzerland,’ and the lower region of the Ardennes offer fabulous experiences for both nature and culture lovers alike, and are laced with some enchanting eateries. 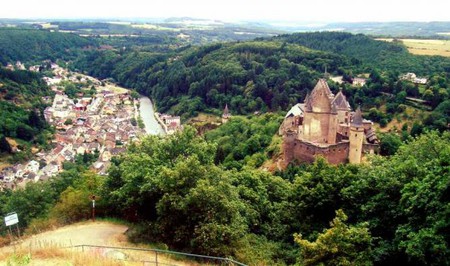 Must See – The View from Vianden’s Chairlift

Discovering the best viewpoint from which to bask in the beauty of a new place can often be the primary quest of an eager tourist, and in the charming town of Vianden this mission is not a difficult one to accomplish! Vianden’s magical hidden valley takes its home upon the banks of the River Our, and on the east side sits a delightful two-man chairlift, which awaits launching you high above the town and its stunning Ardennes surroundings. Floating at a height taller than the characteristic pine trees, even rising beyond the gothic turrets of the grand and forbidding castle standing at Vianden’s center, riders gain the perfect vantage point from which to take in the glory of the old feudal residence, the rolling pine covered hills, and the faded pastel hue of the town. As if the area wasn’t breathtaking enough, the added adrenaline of being suspended mid-air certainly makes this a view to remember.

A contemporary hideaway in quaint little Vianden, the Ancien Cinema Café Club is the coolest place to be in town. The characterful café is situated in exactly what the name implies – what used to be a cinema, which the owners found abandoned, and decided to renovate. The interior is decked out with black and white pictures of screen and jazz icons, industrial-style spotlights and even the theater’s original wooden cinema seats. The menu is as enticing as the surroundings, with a seemingly endless list of coffees, a lavish choice of cakes, and a delectable list of hot chocolates – try the special Polish-style honey hot chocolate. Relax with your treats while watching old cartoons run on the large projector screen, or alternatively peruse one of the cinema-related coffee table books, or if you’re feeling adventurous, play a board game! The café is also a hub for activity, hosting screenings of classic cinema some evenings, and concerts on others – and there are sometimes even workshops during the daytime. From the décor, to the atmosphere, to the grub, there’s nothing not to love about this place.

Exploring the streets of Echternach, Luxembourg’s oldest city, is like taking a trip back into the medieval past. Many of the town’s historical attractions are steeped in a fascinating history; the ‘Urstel,’ for example, which stands in the marketplace, has had a rather turbulent journey. Built as an emblem of the abbot’s supremacy, it was dismantled by French Revolution troops in 1794, and built again in 1938, only to be destroyed during World War II, and rebuilt in the 1980s. Also in the marketplace is The Denzelt, which is certainly the most enchanted of the town’s buildings, looking like the residence of some Luxembourgish fairy-godmother with its 14th century turrets, arches, and semi pink-hued stone. Another spot not to miss is the elegant Rococo Pavilion situated in Echternach’s municipal park alongside the River Sure. Then there is the iconic Basilica of St Williboard, the beautiful church at the city’s center, where you can also explore the courtyards of the accompanying Benedictine Abbey. To top it all off, take a walk around the remains of the city’s 10th century walls, and truly feel like you’ve walked into a time warp.

Must Do – The Victor Hugo Museum

Vianden isn’t only a pretty face – it is also a great spot for literature fanatics, specifically fans of the famous French author and poet Victor Hugo. The writer frequently visited Vianden, and even took up residency there after being expelled from his home in Brussels for harbouring defeated revolutionaries. He found refuge in a house situated on the river, which has since been transformed into the Musée Littéraire Victor Hugo. The museum is informative without being overwhelming, and presents an outline of the author’s biography, and the history of his relationship with the Grand Duchy. The restored house still contains its original furniture, and presents some fascinating artifacts, such as some of Hugo’s letters, paintings, and possessions. It is certainly a quaint and quirky alternative to visiting the large Maison de Victor Hugo museum in Paris. 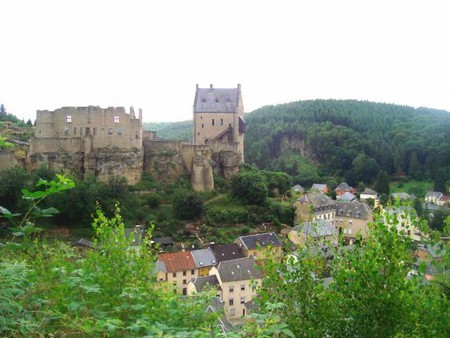 Must Do – Explore Larochette

Larochette is a haven for those that both love culture, and have an outdoor spirit. The ruins of a medieval castle, which stands 150 meters above the valley where the town sits, dominate the town, like so many in Luxembourg. Amble up to the ruins and explore the well-maintained ramparts, where you can peer through the arrow-slits upon the imagined attackers of your 12th century fortress. One of the castle’s towers even hosts regular art and photography installations, for those interested in a culture double-whammy. While it was surely built at its elevated level in order to be easily defended, the medieval inhabitants must have to some degree also appreciated the fabulous views of the thick forests of the Mullerthal region that the castle affords. The best way to obtain striking views of the castle itself, however, is to explore the woody hills surrounding the town. Exploring the local hiking trails, you might also come across Larochette’s hidden Meysembourg Castle, which is buried deep in the woodland next to a tranquil brook. Alternatively, keen hikers may prefer to walk a section of the acclaimed Mullerthal Trail, which covers 112 kilometers-worth of the valleys, rock formations, and pastures of Luxembourg’s ‘Little Switzerland.’

Where to Stay – Camping Birkelt

Perfect location. Spotless facilities. Reasonable prices. What more could you want from a campsite? Camping Birkelt is a beautifully kept five star campsite located a mere five-minute walk from Larochette on a peaceful woodland path. Birkelt has every amenity you could wish for while camping: there is a restaurant on site, along with a very popular snack bar, which is perfect for when you need to fill a niggling little hunger hole – the cuisine isn’t gourmet, but who can argue with a towering ice cream for a euro? As for sporting pursuits, the site has extensive grounds, ideal for a game of badminton, or a kick around, along with its own volleyball court, table tennis table, and convertible indoor to outdoor swimming pool. The pitches for campers are generously sized, or you can opt for a cozy vacation bungalow, all the while enjoying a sense of being at the center of nature. The best news is that barbecues are allowed – so don’t forget your coal!

Where to Dine – Heringer Millen, Mullerthal

Anyone having completed a sizeable chunk of the Mullerthal trail will no doubt deserve a hearty dinner, and Heringer Millen, in the town of Mullerthal itself, is just the place to find that reward. Tucked away in the tranquil pine forests, the light and spacious renovated mill gives visitors the impression of dining within the heart of nature, and is also within reach of the famous Schiessentumpel Waterfall. While it is unassuming in appearance, the restaurant boasts divine offerings inside, where the chef creates innovative twists on traditional Luxembourgish cuisine. Start off with a local charcuterie plate from the Mullerthal region, followed by the fresh and delicate seared cod, which also comes with calamari. If you have space for a dessert, you’d be mad not to try the lemon tart, along with some deliciously sharp lemon and raspberry sorbets. The brasserie, which only re-opened in 2014, already has a fabulous reputation due to the evidently passionate staff, excellent service and marvellous food, so make sure you book ahead so as not to miss out!

Where to Eat – Gelateria Venezia Echternach

No guide would be complete without giving some direction towards where to find that vacation staple, ice cream. Echternach is the perfect city in which to mosey around the old streets with a cone of one of your favorite flavours, and Gelateria Venezia is the perfect place to pick up that indulgence. The café boasts an array of flavors, including the Italian classic stracciatella – simple cream-flavored ice cream laced with generous shards of dark chocolate. If you’d rather put your feet up, simply relax on their outdoor terrace, which is situated on the charming old pedestrianized streets of Echternach, and tuck into a sumptuous sundae; or, if ice cream isn’t your thing, try an authentic and aromatic espresso. Café Venezia offers the best of both worlds – Italy’s delights, but enjoyed while immersed in the refreshing and less intense climate of Luxembourg.

Where to Stay – Echternach’s Medieval Towers

While it is sadly impossible to make a vacation abode of one of Luxembourg’s many majestic castles, a stay inside one of the towers of Echternach’s former city walls might serve as the next best thing. Two of the wall’s medieval towers have been inventively restored and revived as self-catering holiday residences; sit atop your imposing ashen grey tower and pretend you’re Rapunzel, while gazing out over your medieval kingdom. The Laange Veit Tower is furnished with a modern but simple touch, so you can enjoy a sense of medieval imperium, but with all the comfort of the 21st century. The Hämelmaous Tower is slightly more basic, but nonetheless cozy, and for the novelty value of staying in a 13th century tower, who’s to complain? Visit their website to make reservations.

Where to Dine – Pizzeria Chez Emil

Indulging in oodles of fancy dishes while traveling is always a treat, but there always comes that point in the vacation when you just need something honest and simple, in order to cleanse your palette in preparation for your next culinary escapade – so, pizza, anyone? Pizzeria Chez Emil is one of those good and honest-type places; it has a very modest exterior, and inside the comfortable atmosphere is furnished with muted brown tones, and a 50-strong list of fantastic pizzas from which to choose. The menu offers all of the classics, along with some other quirky ideas such as the ‘Popeye’, which hosts plenty of spinach of course, the spicy ‘Dynamite,’ and the intriguing ‘Mystery.’ Or, if you’re still in the mood for some culinary exploration, why not try something like the ‘Exotic,’ which is flavored with kiwi and pineapple. What’s more, you can walk off your pizza by strolling around the cute streets of Ettelbruck, and perhaps wandering up to the General Patton Memorial Museum to have a gander at some war-time military equipment.

Alice Barber is an English literature student and aspiring journalist who simply loves to write. She also has an incurable passion for theater, and along with being addicted to attending shows, currently produces for Green Door Theatre Company.