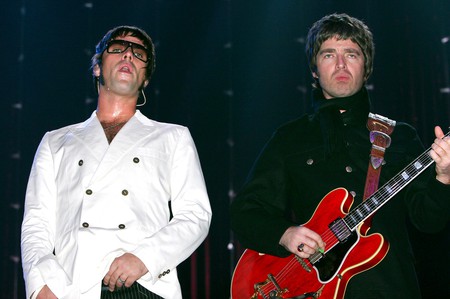 Liam Gallagher has rubbished rumours that Oasis will be reforming for this weekend’s One Love Manchester benefit concert.

Fans have been speculating that warring siblings Liam and Noel might put behind their differences for Sunday’s star-studded show, which will pay tribute to the 22 victims who died in last month’s terrorist attack at Ariana Grande’s Manchester Arena gig.

But Liam, who has now gone solo, has revealed that he’s already booked for another gig on the same night, but did hint that he was up for a reunion in the future.

Asked by BBC Radio 1 whether Oasis would be reforming this weekend, he replied: ‘Mate, I don’t think so. I mean, I’m up for it but I think we’re booked for a gig somewhere.’

And it looks like there’s still work to be done to heal the massive rift between the two brothers.

Quizzed if a reunion was happening, he added: ‘No, it ain’t. Everyone knows I love our kid… He doesn’t speak to me, we don’t speak to each other.

‘I’ll speak to him some day. It’s all very sad, but we’ll get over it…

‘I guess it mustn’t be nice for my mam… If Oasis ever got back together… if they do, they do. If they don’t, they don’t. A lot of people go, “Oh, leave it in the past, you were great then”.’

He said: ‘Mate, if we ever got back together, it would be happening. There’d be no dodgy gigs, it’d be bang on. So there is unfinished business there, but we’ll see what happens. In the meantime, we’re two little solo boys doing our little things, innit.’

Black Eyed Peas singer Taboo sparked the rumours when he tweeted a list of performers that would be playing at the show and tagged Oasis.

He later apologised and claimed it was a mistake.