Jane Austen Is Far From England's First Great Woman Novelist: There Were Plenty of Others Before Her 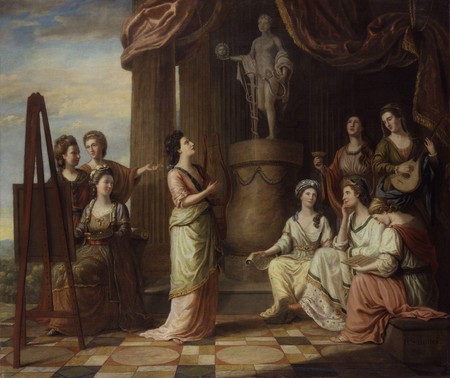 'Portrait in the Characters of the Nine Muses in the Temple of Apollo' (1778) by Richard Samuel. All the sitters are famous bluestockings of the day | ©National Portrait Gallery/Wikimedia Commons

She may be one of the greats, but 200 years after her death, it is worth remembering that Jane Austen was the continuation of a great writing tradition: the history of the novel, from its early days until the great realist revolution of the 19th century, is one dominated by women.

Any of us who have had to bear the subject’s weight in school should have an idea of how the development of the English novel goes: you start with Daniel Defoe, work your way to Jonathan Swift, go through Samuel Richardson and Laurence Sterne, and finally arrive at an explosion of style and substance at some point in the 1800s (a more continental approach would add in the names of Rabelais, Cervantes, and Goethe). Jane Austen, whose novels always form an important part of the teenager’s literary knapsack, magically appears from early in the 19th century—her works a crucial entry into realism, and often the first reads preoccupied with such a thing as womanhood.

Problem is, as you’d expect, Austen is very far from the first woman fiction writer. An oversight made all the graver by the fact that the artform was, until the 19th century, overwhelmingly dominated by the works of women. And so, both in terms of quantity (a minority of the books published in 18th-century England were written by men), and artistic innovation.

It shouldn’t be left unnoticed, for example, that one of the strongest contenders for the title of first English novel ever written is Aphra Behn’s Oroonoko. This short book is groundbreaking for a number of reasons: besides its publication date (1688), it happens to represent a strong argument against slavery, with a narrative that centers on the capture and enslavement of an African prince.

The author, Aphra Behn, led an eventful life, and was something of a celebrity in her own time. After a brief stint as a British spy in the Netherlands, she became one of the late 17th century’s most successful playwrights, and in fact is the first known Englishwoman to have made a living from writing. Virginia Woolf, more than two centuries later, didn’t downplay her achievements when mentioning her in A Room of One’s Own: “All women together ought to let flowers fall upon the tomb of Aphra Behn, for it was she who earned them the right to speak their minds.” 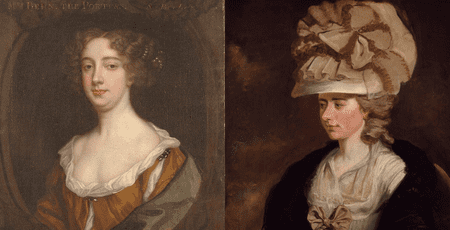 Moving on, the 18th century saw the rise of the Blue Stockings Society, whose social gatherings, modeled on continental salons, formed the heart of British intellectual life. Of the three greatest (and, occasionally, rival) hostesses—the Elizabeths Montagu and Vesey, and Hester Thrale—the last is notable for her innovative nonfiction writing, particularly in the spheres of biography (on Samuel Johnson) and history. Classicist and poet Elizabeth Carter, the first to translate Epictetus into English—amongst other things—was also part of that group.

But more so than intellectual life, women writers of fiction, whether bluestockings or not, dominated the century’s literature. Great names include Elizabeth Singer Rowe, whose Friendship in Death, in Twenty Letters From the Dead to the Living (1728) sold, for more than a century, in greater numbers than Samuel Richardson’s Clarissa (1748) or Daniel Defoe’s Robinson Crusoe (1719). Another is Eliza Haywood, one of the most prolific novelists of the first half of the 18th century, innovative both for her work’s style and subject-matter, a pioneer in the likes of amatory fiction, the female bildungsroman, and the domestic novel.

Of the century’s many other notable writers—Maria Edgeworth, Clara Reeve, Anna Laetitia Barbauld, Sarah Scott, Charlotte Turner Smith, Anne Lister, etc.,—special mention should go to Frances Burney, whose work was an important influence on Jane Austen, and indeed British literature in general. Her writing, and particularly her first three novels, neatly titled Evelina, Cecilia, and Camilla, pioneered the kind of social satire novelists like Austen and Thackeray would later build upon. Her particular and uniquely (for the time) realist treatment of female protagonists is today especially singled out by critics.

To have an idea of Burney’s influence on Jane Austen, one need only note that Pride and Prejudice lifts its title from a line in the final pages of Cecilia: “The whole of this unfortunate business,” said Dr. Lyster, “has been the result of pride and prejudice.”

Women had therefore been crucial in the development of English fiction, and so very long before the supremely talented Jane Austen came along. Two hundred years after her death, we shouldn’t forget that she wasn’t so much the brilliant first as much as the remarkable continuation—or culmination—of a movement which spans the entire history of the novel.

For those looking to learn more on the topic, we recommend reading Dale Spender’s Mothers of the Novel: One Hundred Good Women Writers before Jane Austen, or Jane Spencer’s The Rise of the Woman Novelist: From Aphra Behn to Jane Austen. For those who prefer to listen to their literary history, we also highly recommend the Hidden Histories podcast, a series of six brilliant episodes on this very subject.