Is Fashion Really Ageist, and What Do We Do About It? 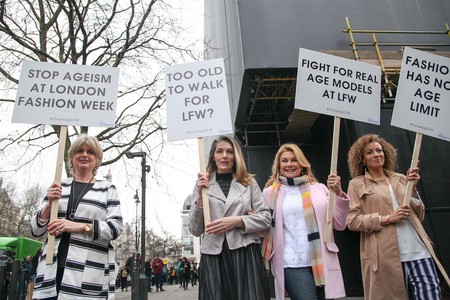 While the anti-fur protests were expected at London Fashion Week, protests against ageism on the catwalk were not. Yet, kicking off the London Fashion Week schedule, ahead even of Teatum Jones, was a group of older models protesting for age equality in the fashion industry.

The group was made up of five women – Janie Felstead, 65, Jilly Johnson, 63, Gina Michel, 47, Brucella Newman-Persaud, 50, and Liz Hoane, 50 – who welcomed visitors on day one of London Fashion Week with placards that read ‘Grow Up, London Fashion Week’ and ‘Fashion Has No Age Limit’.

‘People seem to think that once you reach 40, you’re not interested in clothes and you don’t buy anything, but that’s simply not true,’ Johnson told The Telegraph. She added, ‘A huge percentage of clothes are bought by older women, so fashion is making a huge mistake by ignoring that grey pound.’

Indeed, in the period between 2015 and 2020, the number of people aged over 65 is expected to increase by 12% (1.1 million). This older demographic also has the largest dispensable income, which makes the fashion industry’s tardiness in embracing a wider representation of individuals surprising.

Yet the protests also represent a paradox: the young rule on the catwalk, but the older generations dictate the terms from behind the scenes. Gigi Hadid, Kendall Jenner and Karlie Kloss may be this year’s hottest gang, but if no one covers them or chooses them for their shows, their social media hype can only get them so far. Bloggers may build reputations outside of the traditional platforms, but in fashion, the cachet of being recognised by the ‘in’ crowd is often of more brand value than the millions of dollars generated by a legion of tween followers.

The Eccentrics 📓 Photo by: Rufen Afanador

In terms of tastemakers and influencers, those that wield the largest power are old, or older than the models, at least. Across the industry, older creatives are already celebrated. Vivienne Westwood, Karl Lagerfeld, Giorgio Armani, Valentino et al., are some of the most reputable names in the industry, while brands such as Celine and Louis Vuitton have fronted massive campaigns with women such as Catherine Deneuve and Joan Didion. Culture Trip’s recent celebratory campaign, ‘60 over 60’, addressed this issue, and who could forget the magnificent Iris Apfel, who is one of the biggest style icons of our time at the ripe age of 95.

While social media has meant that the catwalk looks have become more accessible, as an industry, fashion remains notoriously elitist and cliquey. If there is a desire to show larger age diversity on the catwalk, there should be a reciprocal move within the industry at large, with young people being asked to play a meaningful role within the wider system. A fabled few, such as Rookie Mag founder Tavi Gevinson, have broken the ranks and launched their own thing, but these are industry rebels rather than the norm. The problem is that fashion is ageist, but it goes both ways.

It needn’t be this way. As Simone Rocha‘s and Gareth Pugh’s AW17 shows demonstrated, those interested in style are interested in what and how something is worn as much as who’s wearing it. Both designers went with more varied casting, to great acclaim. Social media has ensured the exposure of interesting individuals from a range of demographics and backgrounds, and has shown that there’s a keen interest in dynamic individuals, whatever the age. Youth culture isn’t limited to the young, and being old doesn’t guarantee unparalleled wisdom or expertise.

The key is to look to a more inclusive industry throughout, where knowledge and experience are freely given, and style is celebrated regardless of the wrinkles on skirts and skin.