How to Spend 24 Hours in Oxford 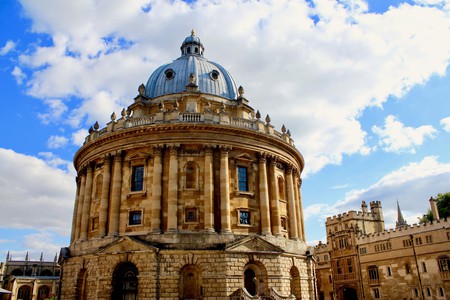 It might not be the biggest city in the UK, but when it comes to things to see and do, Oxford really knows how to pack it in! With so much on offer, it’s hard to imagine how you could ever fit it all into one day, but if time is against you, don’t fret! Here’s how to get the most out of your whistle-stop tour of one of the most beautiful cities in England…

With a jam-packed day ahead, you’re going to need an excellent breakfast to start the day off right. Just a short walk from the city centre you’ll find The Jericho Café. Tucked away in the trendy Jericho district (beloved by students), It offers great quality English breakfasts, to-die-for waffles and plenty of vegetarian and vegan options, all at very good prices. Sadly, there’s no time to linger over the papers, so make that extra coffee ‘to-go’ and start the 10-minute walk to your first stop of the day.

No trip to Oxford would be complete without checking out the iconic Ashmolean. The University of Oxford’s Museum of Art and Archaeology houses a world-famous collection of pieces as diverse as Egyptian mummies and modern art paintings, spread out over four floors. It would take more than a day to properly explore the museum, but a couple of hours gives you enough time to take in the highlights.

The best way to explore Oxford is on foot, but rather than wander aimlessly (we are on a schedule here, people!) join one of the two-hour walking tours by Footprints Tours. Your (Oxford University educated) guide will take your around many of the University’s beautiful colleges, as well as the Bodleian Library and the Radcliffe Camera among many other sights, and share insider info on what it’s really like to study at one of the world’s most famous Universities. The tour doesn’t have a set price, but instead invites you to pay as much as you feel the experience was worth.

After all that walking, it’s time for a sit down. But with so much of the city still to see, head to the water, rather than a park bench, to rest those feet. Punting down the River Cherwell is an Oxford institution, and you can hire boats by the hour from Magdalen Bridge Boathouse to go at your own speed. Pop into Olive’s Deli (just a three-minute walk from the Boathouse) to grab all the essentials for a special packed lunch, then take to the river for a relaxing hour.

Once you’ve had your fill of channelling your inner-Oxford student, take the short walk to Christ Church Meadow. This picturesque open space feels so tranquil, it’s hard to believe you’re actually right in the heart of the city. Soak up the relaxed vibe before you make your way to the next (and final) attraction of the day.

If you’ve got the stamina, explore both the Oxford University Museum of Natural History and the Pitt Rivers Museum. As both museums are in the same building it’s easy to move from one to the other, but if you’re beginning to flag, just pick one to wander around. The Museum of Natural History is home to a world-class collection of geological and zoological specimens, the most famous pieces being the Oxford dinosaurs and the remains of a Dodo. Pitt Rivers Museum is altogether a bit quirkier, with over half a million curiosities and artefacts packed into rows upon rows of glass cabinets and drawers. It’s a real feast for the eyes.

After soaking up all that culture, it’s time for a drink. If you’re a fan of cosy, traditional pubs, head to The Eagle and Child. Dating back to the 17th century, it has a fascinating history, being the meeting place of the Inklings, a group of literary greats including C. S. Lewis and J. R. R. Tolkien. If you’re after something a bit fancier, head back out to Jericho and indulge in the Duke of Cambridge’s epic happy hour (or five hours on Sunday-Thursday!). It’s the place to go for expertly made cocktails in cool, stylish surroundings. Cheers!

When your drink is prettier than your girl

Ask any local where to eat out and chances are they’ll suggest Gee’s. Right in the heart of Oxford, housed in an elegant Victorian Glasshouse, Gee’s Restaurant and bar is the go-to for relaxed, fine dining. Its elegant, yet simply, approach to Mediterranean cuisine will make you want to order everything on the menu, and with all the calories you’ve burnt exploring Oxford over the past few hours, why not treat yourself?

After that mammoth day of sightseeing, it’s time to put your feet up. There are lots of gorgeous boutique hotels in Oxford, but the 17th-century building and charm of Old Parsonage Hotel, coupled with the ultimate in 5-star luxury (think marble bathrooms and the comfiest of handmade beds), make it pretty hard to beat. The perfect way to round off an unforgettable 24 hours.