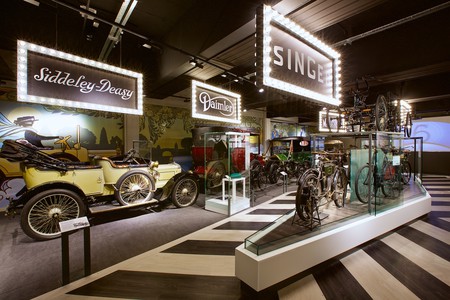 Cars once manufactured in Coventry, including from Damiler | © Coventry Transport Museum

Many British cities once specialised into one manufacturing industry, and Coventry was no exception. It was the centrepiece of the British car industry, taking the skills it already had and applying them to car manufacturing, and becoming affectionately known as the ‘British Detroit’. Despite a traumatic modern history of industrial decline and factory closures, renewed interest and investment from automobile companies and collaboration with universities are helping Coventry and its automobile industry rise again.

From the cotton mill to The Motor Mill

In 1885 Germany, Carl Benz completed his lifelong dream of building what’s widely considered to be the first car. Though the three-wheeled, 0.75 horse powered engine was a far cry from any notion of a modern car, it proved to be enough to capture the world’s attention. One common lens that World War I is seen through is the ideological conflict between British conservatism and Germanic modernism, and Germany giving birth to such a seismic invention is an example of this conflict in action. As Benz’s patented automobile was shown to the public in the next year, interest in Britain grew and wouldn’t be satiated until they built their own. And Coventry became the forefront of this revolution.

Coventry entered the motor industry with a wealth of manufacturing experience in building sewing machines for local textile manufacturing, watchmaking and bicycles, making it fully prepared to take up the British motor mantle. The city had the closest engineering experience and expertise you could get in a country which had yet to build its first car, and it was here that in 1896 Henry Lawson founded the Daimler Motor Company and built The Motor Mills – the factory which would give birth to the first British car.

Lawson made his fortune in making bicycles and saw the potential for even more money in this new craze of internal combustion engines. After buying a patent from F.R. Simms, Lawson made The Motor Mills into the first mass car manufacturer in Coventry and Britain. Unfortunately for him though, his career would end in ignominy as he was found guilty of conspiring to defraud and was sentenced to one year’s hard labour. This ended any major involvement of his in the motor industry but while it may have been the end for Lawson, this was just the beginning for Coventry. 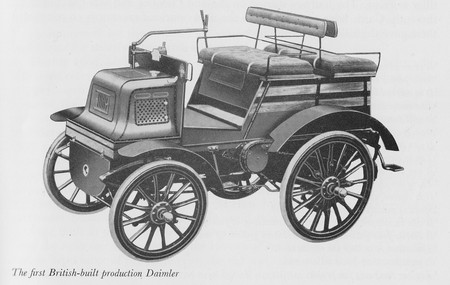 Pioneers can easily find themselves falling behind competition with a more discerning eye and better financial support, a phenomenon known as the second mover’s advantage, but Coventry had no such premonitions. As Henry Ford perfected mass production with the moving assembly line, the large motor companies that now define the industry could begin to establish themselves. During the 1930s, car ownership doubled to two million much to Coventry’s benefit. Coventry became known as the British Detroit, attracting the attention of industry giants including Jaguar, Chrysler, Rover and Humber and the specific ire of the Luftwaffe. In a total war where a potential target could be found anywhere, Coventry was constantly bombed due to its reputation as an automobile hub and manufacturing powerhouse.

As the city centre had endured such intense bombings, many of the factories were moved further outwards after the war. Nonetheless, the devastation of the Blitz wasn’t enough to halt its inexorable rise as Coventry’s industry reached its peak after World War II, retaining the driving seat in the second-largest car manufacturing country of the world. An influx of workers immediately followed the war, driving the boom years of Coventry car manufacturing. By 1950, there were 12 manufacturers in Coventry and the UK became the leading car exporter between 1962-64. This boom in business was a benefit to the worker that earned a 24% higher average wage when compared to the rest of British industrial workers.

Unfortunately, Coventry wasn’t immutable to wider political and socioeconomic trends. The once iconic companies and firms that once proudly stood on their own as captains of innovation were floundering, and as a result many were absorbed into larger companies. For example, British Leyland absorbed Jaguar and Rover into its conglomerate of companies. Just like Detroit, the manufacturing heart that supported the city would ultimately fail and succumb to many issues that sent the industry into rapid decline.

As the union crises that defined the 1970s began to spawn, this combined with bad management and competition from Europe and Japan meant the modern English stereotype for poor quality manufacturing began to take fruition. In a globalised world, an ageing and declining British motor industry couldn’t remain the juggernaut it once was. Consequently, over half of the workers of Coventry’s top 15 automobile manufacturers had been axed by 1982 at a rate of 520 (high paying) jobs per month. The fate of the city seemed sealed as the last of the major companies closed up shop; Jaguar moved production from the Browns Lane plant in 2004 and Peugeot demolished its last Coventry-based plant in 2006.

Cars once manufactured in Coventry, including from Damiler | © Coventry Transport Museum

However, there may be hope of a resurrection. Both Warwick University and Coventry University have been keen new entrances into the race to rejuvenate motor manufacturing in Coventry via collaboration. Warwick University hosts the Warwick Manufacturing Group (WMG) which is funded by Jaguar Land Rover (JLR), as well as the £150-million National Automotive Innovation Centre (backed by JLR, WMG and government funding), designed to further bolster the relationship between universities and industry and encourage collaboration in research and development. In the same vein, Coventry University have recently opened the National Transport Design Centre which is described as an inter-disciplinary centre of collaboration, using eclecticism to fuel new car design.

Jaguar Land Rover’s success story brings hope for a Coventry motor renaissance, as the company which spearheaded British car manufacturing with over 500,000 cars in 2015 is centred in Whitley, Coventry. The company is keen to put itself, and by extension Coventry, back into the driving seat of the race by expanding in both its Whitley HQ, a new workplace named ‘Gateway North’ and most significantly for a new factory for mass production.

But this isn’t a nostalgic foray – much of the rejuvenation has been in research and development and no resurrection should hope to merely copy the past. The RDM Group have been working on autonomous cars pods and software for self-parking cars. The new TX5 electric cabs (which you may have seen in London this year) are being manufactured by the reborn London Taxi Company in Coventry. A new start-up company called Microcab are working on cars powered by environmentally-friendly hydrogen fuel cells, in conjunction with Coventry University in their aforementioned National Transport Design Centre. 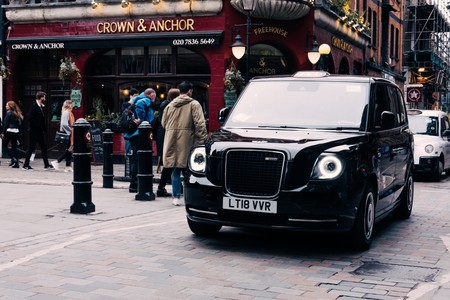 Coventry-based motor companies are being progressive in their approach to ensure the march of the future is sustainable for both the city and the world. It’s fitting that the Coventry coat of arms depicts a phoenix rising from the flames as the city looks to rebuild its renowned motor industry.