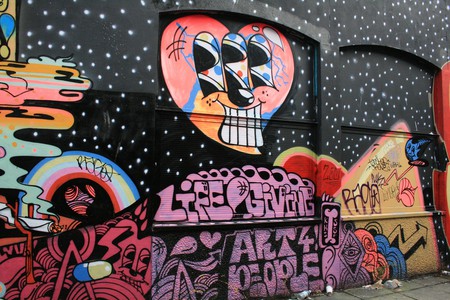 Bristol is famed for the graffiti that adorns its streets, underpasses, back-alleys, bridges, and almost every available surface in the city. Something of an outdoor exhibition space with an incredible cultural scene to boot, Bristol is one of the best places in Europe for street art. Book onto one of the city’s popular street art walking tours or roam the streets yourself to discover the best and brightest of England’s artistic talents on the sprayed painted walls of Bristol.

Arguably the most famous figure to have emerged from Bristol, street artist Banksy is celebrated the world over for his bold, witty, and controversial murals. One of the only works from the artist’s early career to still exist in Bristol is Well Hung Lover on Frogmore Street. Unusually, for Banksy’s early work, this mural was not removed by the local authorities, and remains in the city as a point of pilgrimage for Banksy fans visiting the city that shaped their hero. The painting is humorously graffitied onto the side of a sexual health clinic and is best viewed from Park Street, on the bridge that crosses Frogmore Street. 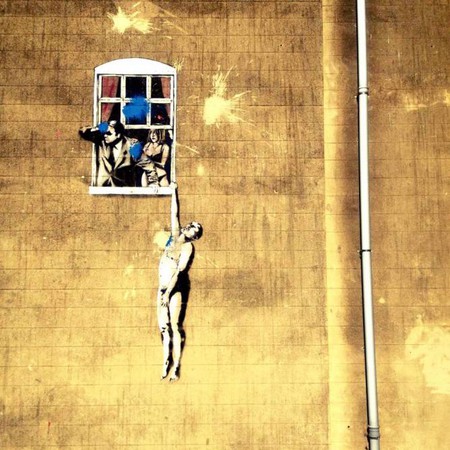 A central artery through the beating heart of the city, Nelson Street is one of Bristol’s major roads and, in 2011, the drab grey frontings and exposed brick exteriors of the street were transformed into a vibrant exhibition of color as part of the See No Evil festival. At the time, this urban art project was the largest street art festival Europe had ever seen and saw world-class graffiti artists from all four corners of the globe coming to Bristol to display their talents on the dreary 1960s walls of Nelson Street. The street is now one of the best places to see cutting edge urban art in Bristol. The immense Vandal mural by Nick Walker pouring down onto the pavement below is a truly spectacular sight. 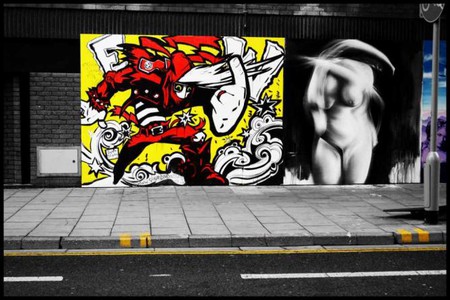 Bristol’s buzzing ethnic quarter, Stokes Croft, is one of the coolest areas of the city, home to great vintage shops and fantastic independent music stores. The whole district is practically an open-air gallery with constantly changing displays from the best local graffiti artists as the forever raging battle between local authorities and street artists causes color to be erased and re-emerge anew in an endless cycle. Grassroots talent springs up from every crack of the pavement here but there are also examples of true urban masterpieces such as Banksy’s famous Mild Mild West mural – after the Clifton Suspension Bridge, voted the alternative most iconic image of Bristol. Cosmo Sarson’s Break-dancing Jesus on Hamilton House and the astrological masterpiece by artist Cheba that covers an entire hostel are just a few of the other breathtaking sights in Stokes Croft. 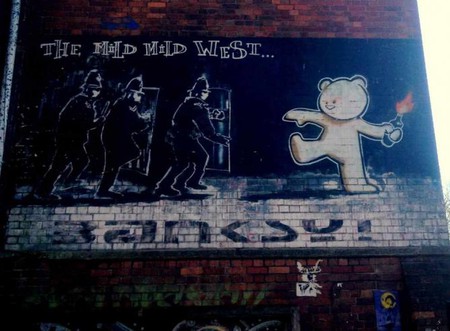 This museum is dedicated to Bristol life and true local pride bursts from every display and exhibit here. The M Shed is a truly interactive space and a celebration of the city’s famous places, people, and history. With street art so integral to Bristol’s cultural scene, it seems hardly surprising that large sections of this fabulous museum are devoted to the graffiti that earned the city its reputation as the capital of urban art. Forget da Vinci and Monet for a minute and discover 21st century masters in Bristol’s M Shed museum. Highlights include Banksy’s Grim Reaper, removed from its original location on Bristol’s floating music venue, Thekla, and Andy Council’s illustrated dinosaurs, each ridge and crest of the body created out of the shapes of Bristol’s most iconic architectural landmarks. 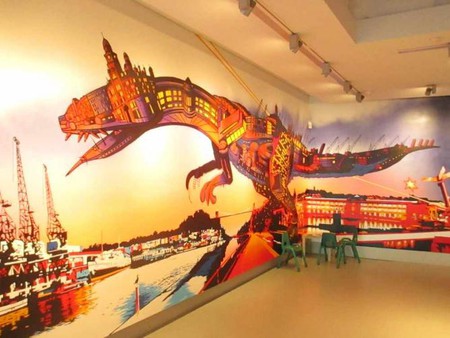 A stroll past Bristol’s M Shed Museum, the iconic SS Great Britain, and the famous Aardman studios will lead you to an unassuming building on Bristol’s harbor side. Just next to a burger van, this building acts as the canvas for one of Banksy’s greatest works – the ‘Girl With a Pierced Ear Drum’. This satirical parody of Vermeer‘s famous Girl with a Pearl Earring speaks volumes about modern society and, along with its unglamorous location, perfectly blends high culture and fine art with gritty realism. Completed in October 2014, Girl with a Pierced Ear Drum is the artist’s most recent project in his hometown.

Bristol’s Indian quarter is a treasure trove of piquant smells, incredible Asian food, and intriguing independent shops. The area is also home to some of Banksy’s best originals. Considered vandalism and an unsightly stain on the streets at the time, these works are now priceless and a great source of local pride. Banksy’s wonderfully self-reflexive Cat and Dog mural on Foster Street pictures a feline figure bedaubing a wall with a spray can as two guard dogs patrol along and is captioned by the apt quote: “There are crimes that become innocent or even glorious through their splendour, number, and excess.” The other Banksy in Easton, Masked Gorilla, is a restored version of the original which, in 2011, was accidentally painted over. Aside from these famous creations, the whole of Easton is a collection of outstanding creative talent and the back alleys off Stanley Park offer incredible opportunities to admire the unnamed and unknown masters of our day. 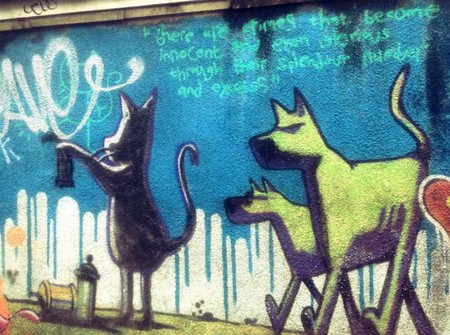 A district to the south of the city, Bedminster is yet another easel propping up the best of Bristol’s fantastic young artists. The murals on the walls of The Masonic pub in Bedminster are regularly changing to display work by the latest spray paint geniuses, but are an unfailingly jaw-dropping sight. Turning the corner onto Bedminster’s West Street, you won’t fail to be bowled over by the humongous, galloping whirlwind of vivid crimsons and pinks that is one of Andy Council’s iconic murals. Artistic treasures, such as the Old Bookshop mural on North Street and the paintings opposite the Aldi car park, transform otherwise mundane and run-down areas into a dazzling, open-sky exhibition center. 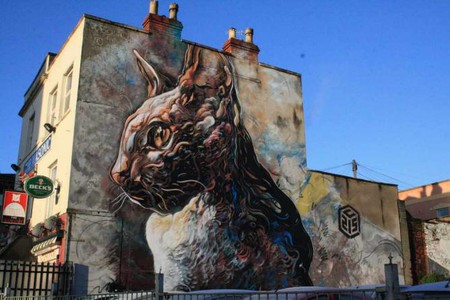 Street art on the side of The Masonic pub in Bedminster, Bristol | © KylaBorg/Flickr

Europe’s largest street art festival, Upfest is an unmissable event in the calendar of any graffiti fanatic and urban art buff. In 2015, over 250 of the world’s best artists traveled from around 25 different countries to transform almost 30 venues with their kaleidoscopic colors, inspiring images, and expert brush (or rather, spray) strokes. Over the course of one weekend in July these urban masters displayed their expertise live alongside affordable art sales, live music events, and art workshops as part of this annual free festival. The Upfest Gallery, on North Street, Bedminster, is the longest running urban art gallery in Bristol and, with its exhibitions of top international street artists, is a fantastic place to discover the Banksys of tomorrow. 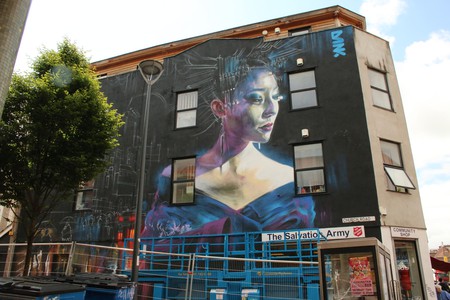 Dan Kitchener at Upfest | © KylaBorg/Flickr
Give us feedback