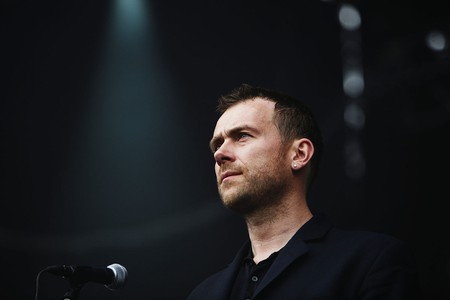 A new Gorillaz song is a reason to celebrate in itself, and the same goes for a new Arcade Fire song. Both of them in the same day is borderline lunacy, and yet here we are, and it’s ultimately disappointing.

Talk of Damon Albarn’s fifth LP under the Gorillaz moniker started back in October 2015, and nothing could have prepared us for the curiosity that is “Hallelujah Money” — although the track will not be featured on the new album, according to its press release. Featuring Benjamin Clementine — more so Clementine featuring Gorillaz — the arrival of the duo’s first new song in six years the day before Donald Trump’s inauguration is no coincidence.

“And I thought the best way to perfect our tree / Is by building walls / Walls like unicorns / In full glory / And galore / And even stronger / Than the walls of Jericho,” Clementine sings in the song’s first verse, obviously referring to Trump’s campaign promise to build a wall along the U.S. Mexican border. In the song’s video, Clementine creepily stares into the camera, while all manner of bizarre images flash behind, the final clip showing SpongeBob SquarePants crying and running away from the screen.

While there’s no explicit declaration that the release of Arcade Fire’s “I Give You Power,” the group’s first new track in three years, is tied to the imminent inauguration of Trump, the band did tweet out, “It’s never been more important that we stick together & take care of each other,” along with the track. Throughout its near-four minutes, frontman Win Butler and featured guest Mavis Staples bounce back and forth between singing “I give you power” and “I can take it all away — watch me!”

While both tracks could certainly fit right at home in some sort of dystopian film, it’s hard not to feel entirely underwhelmed by both tracks. Both instrumentals remain static throughout the course of the songs, providing very little incentive for the listener to return to either. Albarn is barely even visible in his own track, and Clementine doesn’t come across as either delightfully villainous or righteously inspiring. Butler and Staples literally repeat the same phrases over and over again throughout “I Give You Power,” and while the track is a little groovier than Gorillaz’s, it all sounds like a forgettable “Gold Digger” ripoff.

While 2016 was a great year for protest music, Trump’s presidential election is guaranteed to propel protest music throughout the next four years, and at some point, it’s all going to get boring, and, frankly, just bad. That doesn’t mean there won’t be some incredible songs of political importance from here on, just as these tracks don’t reduce the brilliance of either artist, but when Gorillaz and Arcade Fire both fall short within the first month of 2017, things aren’t looking too great.