Ghosts: How We Live in the Future

It feels fitting – if not a little ironic – that Lee Cavaliere’s Ghosts exhibtion is housed at The Fine Art Society, London. As we witness many of the capital’s cultural establishments under threat from new developments, The Fine Art Society, established in 1876, is one of London’s treasures. Ghosts is a collaboration of work from six contemporary artists who explore the social effects of urban regeneration. Ghosts is almost a tale of two cities; the one we know and the one we don’t, yet. 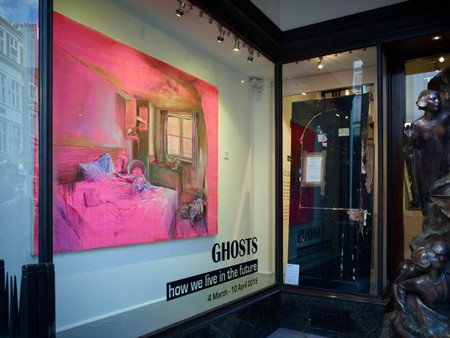 Courtesy of The Fine Art Society

The Fine Art Society’s head of contemporary art, Lee Cavaliere, aims to engage with a slightly younger demographic than what the historic gallery normally draws. With Cavaliere’s contemporary angle, the gallery supports artists working today. Cavaliere had the idea for the show some time ago, and discovered the correct combination of artists to work with in order to project his vision for Ghosts. If ever there was a time to shine light on London’s transformation it is now. The head of contemporary commented, ‘The recent ‘destruction’ of the Paolozzi mosaics at Tottenham Court Road and closure of Soho’s cultural centres are examples that have raised debate about the threat of homogenisation, which London has always resisted.’ 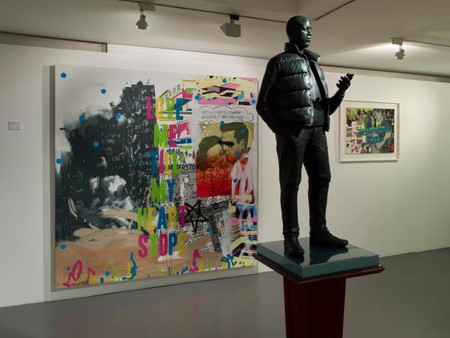 In no particular order the featured artists, Juliette Losq, Macarena Yanez, Laura Oldfield Ford, Thomas J Price, and Simon Terrill, add global credibility to the exhibit. Each with their specific niche, the listed artists bring forth a picture of London’s modernism through large-format photography, posters, and video records.

Macarena Yanez focuses her work on ruins and deterioration. Yanez’ Stills from Exploration through Hackney, 2010 is a film record highlighting the devastating extremes that some endure in order to live in London. Furthermore, her work depicts the transformation of a ravaged block of council flats in Hackney from desolate accommodation to new luxury apartments. Is there any part of London left untouched by proprietors building from the ground up? 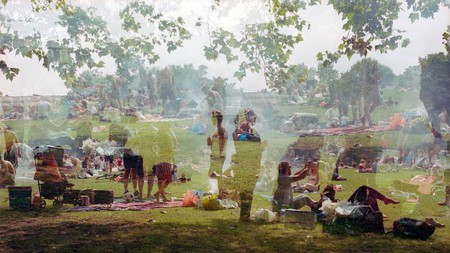 Simon Terrill’s London Fields, 2015 print is a distinct London location that has positively formed a relationship with the capital. The regeneration of London Fields as a hangout destination is truly an example of the city’s progression. Terrill’s work captures the urban space’s mixed ethnicity while remaining authentic to East London roots. Even the mention of a London neighbourhood can trigger the notion of gentrification, and Terrill’s work does exactly that.

The works from Yanez and Terrill observe different social realms in the capital yet project a vision of London’s future. 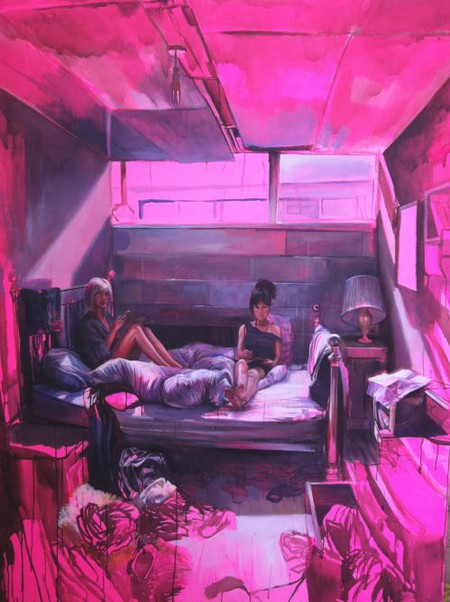 Much to the dismay of many, the demolition of notable London haunts gives way to a revitalised city and new generations who might recreate London for better, or worse. Ghosts asks if the character of London needs alteration? Will tearing at London’s core cheapen its rich history? We have a city full of history that many across the world are envious of, so why risk our past for an unwanted future? Or is a futurist London the only way to head toward? If contemporary artists are steering their careers towards an ever changing London, aren’t other professionals allowed the same grace?

Whether you are London born and bred, a short term resident or tourist; open your mind and ask yourself where London is destined to go. Ghosts: How We Live in the Future ran from March 4th to April 10th 2015 at The Fine Art Society.

Danielle has a fascination with living a life full of creativity. She is the founder of A Life in a Season blog and contributes to Huffington Post UK. When not writing her next blog post or snapping photographs, she can be found emerged in the latest film and theatre performances while discovering the newest trends hitting our streets.