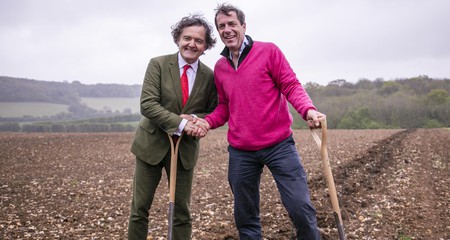 Brexit may be coming, but so’s climate change, and so one of France’s most prestigious champagne houses has taken the step of planting vines in the ‘Garden of England’ rather than Reims, France.

Pierre-Emmanuel Taittinger, president of Champagne Taittinger, was joined by his family and investors at Chilham, on the Kent Downs this week, to help plant the first vines. This makes the house the first ‘Grande Marque’ champagne producer to do so.

Taittinger is hoping to plant some 40 hectares (99 acres) of Pinot Meunier, Pinot Noir, and Chardonnay varieties in the coming three years, and have the final product ready for sale in 2023. As for a name, Monsieur Taittinger has decided on the apt Domaine Evremond, named after Charles de Saint Évremond, a French solider, author and epicure, who fled France for England and the court of Charles II in the 1660s. 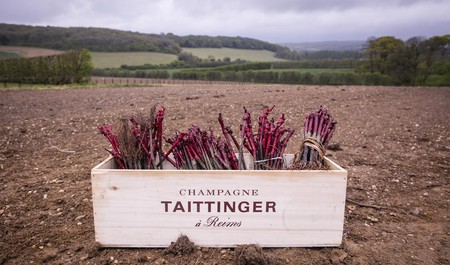 At the planting ceremony, M Taittinger said ‘we have been very impressed by the quality of English sparkling wine being produced, and we believe the combination of chalk soils, climate and topography of our site in Kent are ideal for producing quality sparkling wine. These attributes are perfect for grape growing, and are very similar to the terroir in Champagne, for us it was a natural step to do this.’

Though small in production amounts, and commanding a premium price, English sparkling wine is having something of a moment, winning awards and plaudits around the globe. However, as anyone in Britain knows, you can’t predict the weather. After a warm spell around Easter, many vines had begun to sprout buds and leaves that would go on to become grapes, until a snap frost at the very end of April resulted in devastation for many English wine producers.

Some took drastic measures, such as lighting candles or using fan heaters to try to ward off the worst of the frost, but it was of little help in most cases. This will affect not this year’s output, but 2019 and 2020. So if you’re planning on celebrating a hard Brexit with a bottle of English fizz then, it’s just got a lot more expensive.