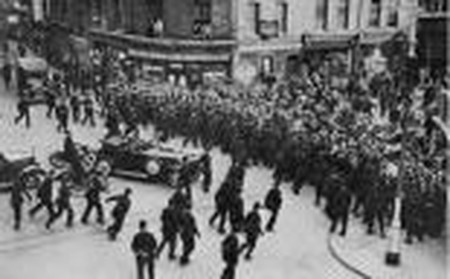 Over 75 years ago The Battle of Cable Street brought the fight against fascism to the streets of London, as thousands of ordinary Londoners stood in the way of Oswald Mosley’s Fascist march. We remember this sometimes forgotten historical event and reflect on the heroism displayed by the people of London.

Tuesday the 4th of October 2011 marked the 75th anniversary of the Battle of Cable Street, when people from the East End of London halted a march by Oswald Mosley and his British Union of Fascists. Oswald Mosley was a prominent politician who had served as an MP in the 1920s before he became disenchanted with mainstream politics. He was inspired by the fascist movements of continental Europe to create the British Union of Fascists. Nicknamed the ‘Blackshirts’, this was a vehemently pro-fascist organisation which sought to promote its anti-communist, anti-immigration and anti-Semitic ethos throughout British society.

The protest in Cable Street in 1936 was a self-consciously provocative attempt by the British Union of Fascists to march through the Jewish neighbourhood of Stepney and intimidate the residents. As the news reel footage above shows, 7,000 Black shirts were gathered for the march which was to be escorted by the police through the East End. What happened next will forever go down as a piece of East End left wing folk lore; the 7,000 Fascist marchers were met by approximately 300,000 people intent on stopping the march. They were led by members of the Communist party and set up road blocks along Cable Street ready for the approaching hordes of Fascists; the slogan of these anti-Fascists was ‘They shall not pass’. The fascists, after briefly fighting back, were forced to disperse.

The Battle of Cable Street was an unequivocal statement of revulsion at the fascist ideology of Mosley’s movement and a repudiation of their vision of an ethnically homogeneous Britain. The 75th anniversary in 2011 saw a range of celebrations including concerts and festivals honouring the anti-fascists. The Battle is also commemorated in a mural on Cable Street which depicts both the chaos and the heroism of that day.