Where To Find England's Hidden Sculptures 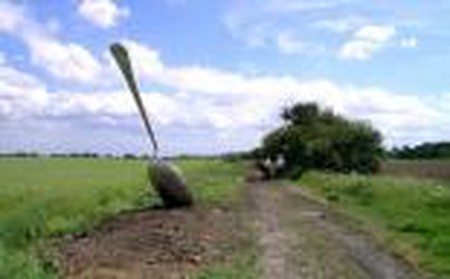 Following on from the success of spontaneous initiatives such as the Secret Cinema, pop-up supper clubs and hidden shopping events, it appears that the notion of ‘hidden’ entertainment has become something of a cult phenomenon across Britain. Start your own tour of the unexpected as we reveal 10 must-see hidden sculptures in the UK.

Revive your latent childhood dream of stumbling across treasure buried deep within the sand with Gold Bullion. Treasure hunters young and old can travel down to Folkestone Beach to unearth one of the UK’s best-kept secrets. The small imitation bullions are not immediately reminiscent of sculpture, but were constructed as one part of 21 artworks commissioned for the Folkestone Triennial. Over the summer, the beach was laden with individuals armed with buckets and spades, searching for gold rather than shells, and still many blocks remain undiscovered. This installation takes the definition of hidden sculpture quite literally, directly aligning not only with the tradition of Folkestone digging but with the current trend for audience participation in art. 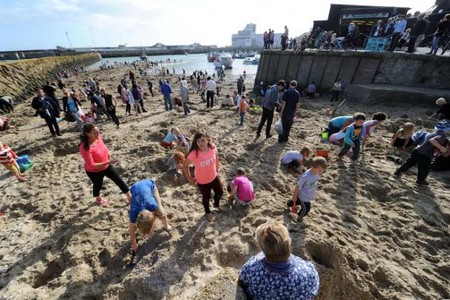 Another Time: The Iron Man

Antony Gormley has long been a celebrated individual, not only for his sculptural prowess as a seminal artist, but for his active engagement in social and community initiatives. Exeter College, Oxford, is the latest building to be crowned with one of his iconic figures, inspired by his own corporeal measurements. At 2.1 metres tall, this rusted male figure is particularly opposing, gazing down on Oxford from the tiled terraces of the city’s famous skyline. This burnished statue, part of Gormley’s Another Time series, frequently goes unnoticed as it stands alone overlooking Broad Street – cast your eyes upwards for an unexpected treat.

Imagine taking a stroll across the verdant landscape of Northumberland, passing towns and villages as you go. Next, conjure up the image of a 25 foot metal spoon, dipping into the earth before you. Such is the joyful, tongue-in-cheek surprise that is Bob Budd’s Eat for England. Whilst this sculptural metal spoon is not a new installation, it remains little known and rarely visited. The sculpture was erected in 2006 as part of a Lottery-funded art installation trail and its position was “very logical” for the artist, who explains that the fields are the very origins of food production. A circular under path is the first clue towards this ‘X-marks the spot’ field in the heart of the English countryside. 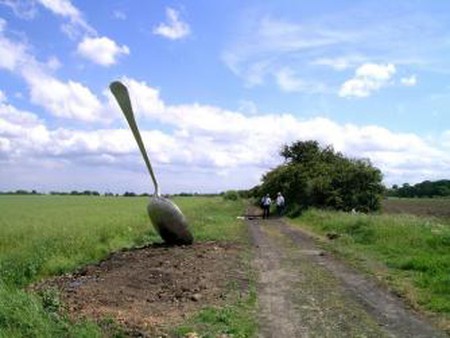 The Eden Benchmarks series of 10 contemporary stone sculptures are located at intervals along the river Eden, between its high source above Mallerstang valley to north of Carlisle where it runs into the Solway Firth. This sculptural grouping is the brainchild of the East Cumbria Countryside Project (ECCP), which brought together the ten artists in a six-week residency, carving their creations as autonomous works of art that must function also as places to sit. Visitors can walk between the calming Water Cut by Mary Bourne in Mallerstang to the flower cup style Global Warming by Antony Turner situated at Rockcliffe. 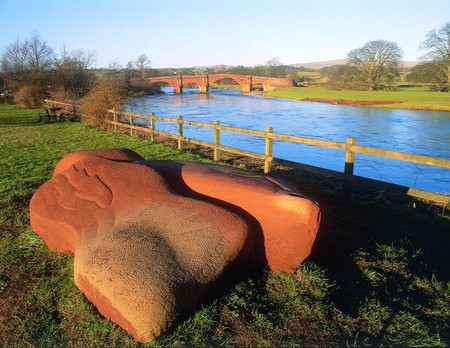 The Irish Elks are landmark artworks lining the National Route 6 cycle path on the site of the ex-colliery at Snibston Discovery Park. Artist Sally Matthews drew on her sculptural skill and keen observational techniques to create elk sculptures from recycled materials and metals. SUSTRANs are the movement funding this new artistic trail and proudly support Matthews’ emulation of animals in her work, carefully translating their unique nature, smell, movement and behaviours into metal. 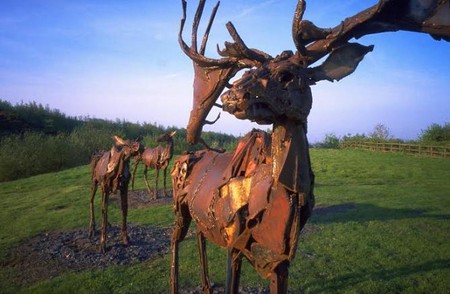 Derived from the Latin for “forest head,” Silvas Capitalis embodies the form and nature of its apt title. A collaborative work created by American artist’s collective SIMPARCH, the structure consists of an enormous wooden head with hollowed out mouth and eyes, gaping up from the floor of the woods on the Lakeside Way. Its magnitude is all the more impressive in person, when the contours of the wood are suddenly transformed from theory into a three-dimensional pattern of timber layers, giving the head a finish reminiscent of parquet flooring. Visitors can enter via the neck of the woods and climb up behind the eye sockets to peer out from the forest face, observing the environment in the manner of Silvas Capitalis’s perpetual stare.

Kenneth Armitage is the artist behind the giant hand structure, Reach for the Stars, which sits atop an outstretched arm. The sculpture is Armitage’s final work and has recently undertaken a tour of Newcastle, popping up on street corners, in deserted parks and in the city’s cul-de sacs. Standing at 30 feet tall, aesthetically it is an imposing sight. Local resident Professor Burton believes that it “draws attention to a space that otherwise wouldn’t be noticed or thought about much, and animates it in a certain way.” However, its current re-location within the arches of Gloucester Cathedral as part of the Crucible2 Exhibition highlights the sculpture’s symbolic significance. As the name suggests, Armitage hopes that his work encourages aspiration in its viewers and fosters hope in all who chance upon it.

Maggi Hambling’s beach sculpture Scallop (2003) celebrates the music of Benjamin Britten and is inscribed with lines from his opera Peter Grimes: “I hear those voices that will not be drowned.” These words are etched into the bronzed hull of the shell which rises up from Aldeburgh beach in Suffolk. Standing at four metres high, this piece has attracted controversy, in a similar vein to that of Hambling’s other recognisable work in homage to Oscar Wilde. Regardless of the politics surrounding the space and the significance of the work, it is undeniably suited to its location. Hambling describes it as in conversation with the sea: “an important part of my concept is that at the centre of the sculpture, where the sounds of the waves and the winds are focused, a visitor may sit and contemplate the mysterious power of the sea.”

The Seven Noses of Soho are perhaps the most infrequently observed sculptures in the UK. Even native Londoners will invariably look askance when questioned about the whereabouts of Soho’s concealed noses. This is perhaps due to Soho being one of the most vibrant, energetic parts of the capital, already inundating the senses with smells of tapas eaten al fresco and the hubbub of street markets. The noses are the work of sculptor Rick Buckley, who took various casts of his own nose and dotted them around the area in 1966. Since then, other noses have appeared, many in a standard white plaster finish. They tend to re-write the linear edges of buildings and it is even rumoured that you will attain infinite wealth upon sighting one. 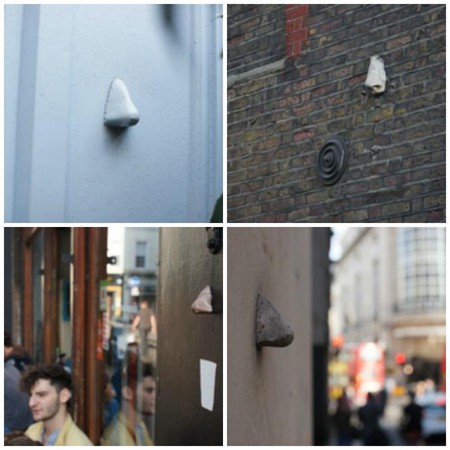 Straddling the line between pagan and Christian, the Zennor Mermaid is carved into the end of a pew in the Church of St Senara, Zennor, West Cornwall. Nestled in this quiet location in the corner of the country, this piece is regrettably absent from public awareness. Zennor is a charming village near St. Ives, deriving its name from a popular Cornish folktale The Mermaid of Zennor, first set down by William Bottrell in 1873. The church’s homage to their namesake is just one instance of the county-wide impact that this tale has had on artistry, music and literature.