Does the Queen Really Own All the Swans in England?

Mighty, majestic and not to be messed with, swans in England are all owned by the Queen – or at least that’s what most people think. Find out the real story here…

Swans are incredible creatures, with their long, elegant necks and powerful wings. It’s no surprise they featured in Greek mythology with Zeus taking the form of a swan in order to seduce Leda. Perhaps this is how the species has become the subject of more modern myths, including how many people think the Queen owns all the swans in England. Contrary to popular belief, the Queen does not own all the swans in England, as five-year-old Lindsay Simpson from Petersfield, England, found out when she asked Queen Elizabeth II for a pet swan in 2017. She does own most of them, however. 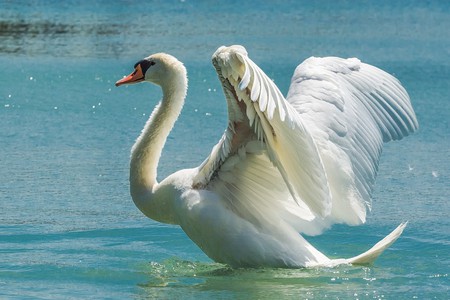 In fact, the British monarch owns all unmarked mute swans in open water in the UK, but the Queen only exercises ownership on certain stretches and tributaries of the River Thames around Windsor.

Outside the royal household, only one group of people can legally hunt and eat unmarked mute swans, and that’s the fellows of St John’s, Cambridge. While the origins of this scholarly privilege are unclear, the college has swan traps built into the walls of the college along the river. Fortunately for the swans, these are no longer used and, according to St John’s, there is no record of swans being eaten at the college since 1896.

So what exactly are ‘mute swans’? They’re the iconic species of swan with white feathers and orange beaks native to Eurasia – and seasonally, to some of Africa’s northern reaches – which were originally introduced to North America, Australasia and southern Africa. The mute swan gets its name because it’s relatively quiet compared to other species of swan. 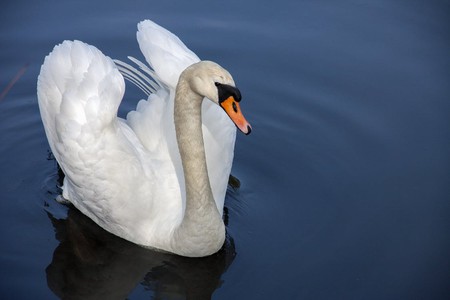 The term ‘swan song’ comes from the idea that mute swans become more vocal in their dying days, a belief shared by the ancient Greek philosophers: Aristotle, Plato and Socrates.

In 1993, the medieval post of Keeper of the Queen’s Swans had its responsibilities split into Warden of the Swans and Marker of the Swans. Together, these two ceremonial officials of the royal household organise and conduct the annual swan-upping ceremony, where swans and cygnets on the River Thames are rounded up, counted and examined for injuries before being released back into the wild. 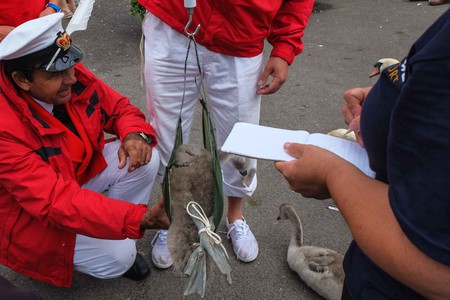 Besides the monarch, only the Worshipful Companies of Vintners and Dyers (two of the most ancient Livery Companies of the City of London), still observe the tradition of owning swans on the River Thames. Swan-uppers from these livery companies join the Warden and Marker of the Swans on the annual swan-upping ceremony every July.