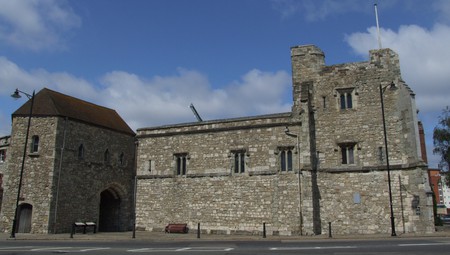 The scheduled ancient monument and Grade II building, God’s House Tower, was built in the late 13th century and started life as a simple gatehouse.

The original gatehouse stood at the southeast corner of the town walls, surrounding medieval Southampton, and provided access to the newly constructed quay. The nearby hospital, God’s House, was founded in 1168 by Gervase le Riche as a refuge for poor travellers, and this is where the Tower gets its name from.

The French raid in 1338 created a need to reinforce the defences, and so, God’s House Tower became one of the earliest forts built specifically to carry a cannon.

Alongside the addition of a cannon, construction work to the building was needed, mainly to help the people survive the 100-year war that followed. This included a two-storey gallery and a three-storey tower, both of which provided enough cover and protection for those that controlled the flow of water into a tidal moat, created to power the mill under the tower. In the gallery, the gunpowder and gunshot were created and stored by the town gunner.

By the 17th century, the need for strong defences had calmed, and the Tower was soon partially turned into a correctional facility – it later became the town jail until 1855.

It wasn’t until 1957 the idea to convert the building into a museum was put forward. Sure enough, in 1961 the Museum of Archaeology opened to the public, displaying Southampton’s stories through the Roman, Saxon and Medieval period, before re-homing to the SeaCity Museum in 2012.

As it still maintains great importance to the city of Southampton’s story, the gatehouse has had a grant approved, enabling it to be restored and ‘reincarnated’ by ‘Aspace’ arts: “Changes will include returning public access to the tower and removing the modern internal walls to re-expose a number of original architectural features. A lift will also be installed granting access, for the first time in 700 years, to the upper floors of the main building.”