Cornelia Parker’s sculptures are active reconstructions, audacious manipulations and endless juxtapositions of cultural material; they have made Parker one of the most respected contemporary British sculptors and an artist to watch. We explore the philosophy behind her works and take a look at some of her most iconic installations, from Mass (Colder Darker Matter) to Cold Dark Matter; An Exploded View.

In the book Cornelia Parker, by director of the Whitechapel Art Gallery in London Iwona Blazwick, Parker discusses how sculpture has traditionally been associated with a sense of stability by virtue of being connected to the earth. For her, however, her work “is constantly unstable, in flux; leant against a wall, hovering, or so fragile it might collapse.” Cornelia Ann Parker OBE is not afraid to ask the big questions through her art. 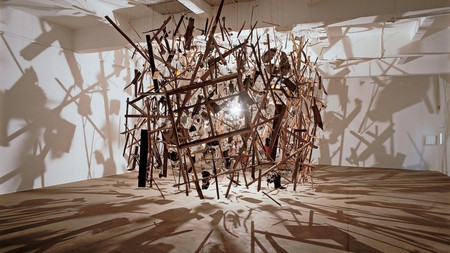 Shortlisted for the Turner Prize in 1997, this sculptor and installation artist manipulates materials to force viewers to re-evaluate how they see and appreciate the everyday. Her artwork exposes the fragility of human experience, exploring the amalgamation of various elements necessary to connect and create life and art, and the brutal violence that can deconstruct it.

‘Perhaps that’s what I feel about my own relationship to the world’, she says. ‘It is a universal condition, that of vulnerability. We don’t have solid, fixed lives; we’re consistently dealing with what life throws at us.’ Parker’s work is an attempt to formalise, and rationalise, things beyond our control; to distil the eye of the storm. Taking this literally, for the 1997 Turner Prize exhibition, Parker exhibited Mass (Colder Darker Matter), arranging the charred remains of a church that had been struck by lightning in Texas into a visual formation of a suspended cube. Eight years later, she created a companion piece Anti-Mass (2005), using charcoal from a congregation church in Kentucky, which had been destroyed by arson.

Blending human and natural forces, her installations are eerie and provocative; they force the viewer to observe the transformation of ordinary objects into something ethereal in order to play on private and public meaning and value. The Maybe (1995) at the Serpentine Gallery in London is exemplary of Parker’s fascination with taking objects and materials loaded with associations and juxtaposing them with one another; it was a performance piece conceived by actress Tilda Swinton, who lay, supposedly asleep, inside a vitrine. 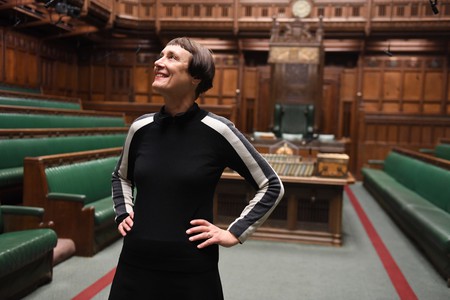 Parker filled the Serpentine with glass cases containing relics that belonged to famous historical figures, such as the pillow and blanket from Freud’s couch, Mrs. Simpson’s ice skates, Charles Dickens’ quill pen and Queen Victoria’s stocking. Through a combination of visual suggestions, her work triggers cultural metaphors and personal associations, which allow the viewer to become part of the alteration of ‘ordinary’ objects into something extraordinary.

Parker is best known for her large-scale installations such as Cold Dark Matter: An Exploded View (1991), first exhibited at the Chisenhale Gallery in East London. The restored three-dimensional volume of a garden shed exploded by the British Army at the request of the artist, Parker reassembled the surviving fragments and suspended them from a ceiling as if suspending the explosion process in time. Destruction and reconstruction are prevalent themes in her work. Avoided Object is the title of an ongoing series of smaller works, which have been developed with various institutions, such as the Royal Armouries and Madame Tussauds.

Parker transforms these somewhat mundane objects, such as a teapot, by burning, shooting, squashing, stretching them in order to challenge what we attribute value. She extracts the objects from their current, or expected, existence and manipulates them into something new. Her work The Negative of Whispers (1997), ear plugs made of fluff gathered in the Whispering Gallery of St. Paul’s Cathedral, London, may not even be considered ‘objects’ in the sense that it consists of items we consider insubstantial and transient. Put together like sculptural material, the result is a complex and interesting web of associations focusing on the potential of material, and challenging our measures of value.

Thus, Parker does not only work with the malleable scale and substance of things, but also with the meaning conveyed by objects. She has challenged modern modes of praise by involving historical artworks in her own works. In 2003 she wrapped Rodin’s The Kiss sculpture with a mile of string as her contribution to the 2003 Tate Triennial Days Like These at Tate Britain. Similarly, Subconscious of a Monument (2005) is composed of fragments of clay, which were removed from beneath the Leaning Tower of Pisa in order to prevent its collapse.

In 2008, as part of her exhibition at the Whitechapel Laboratory, London, Parker presented a 40 minute film – Chomskian Abstract (2007) – which documented her interview with the world-renowned writer and theorist Noam Chomsky. Parker explores various modes of destruction and construction to investigate the vulnerability of human existence and the fragility of meaning. 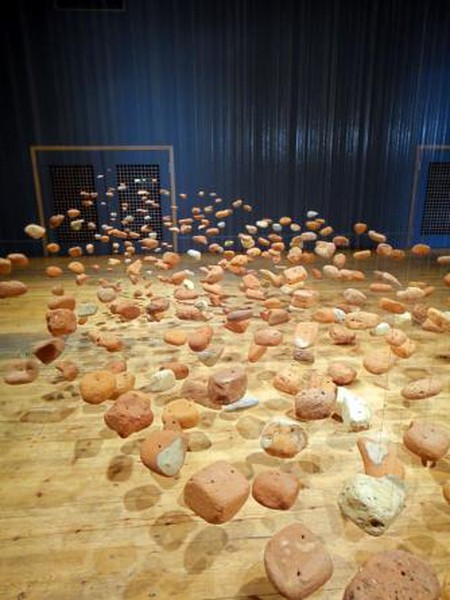 Cornelia Parker, Neither From Nor Towards, 2011 | © Matt Kieffer/Flickr

The Whitworth Art Gallery, Manchester, will be exhibiting the work of Cornelia Parker between 25 October 2014 and 8 March 2015. This extensive presentation will feature a wide range of work, including her infamous installation Cold Dark Matter; An Exploded View, (1991) alongside recent additions to her ongoing series of Avoided Objects. In anticipation of this, Parker has been collaborating closely with scientists at The University of Manchester, most notably Kostya Novoselov, who, with Andre Geim, was awarded the Nobel Prize for his work on graphene – the thinnest and strongest known material.

According to the Whitworth, Novoselov took microscopic samples of graphite from drawings in the Whitworth’s collection by William Blake, Turner, Constable and Picasso as well as a pencil-written letter by Sir Ernest Rutherford (who split the atom in Manchester). He then made graphene from these samples, one of which Parker is making into a work of art, a Blake-graphene sensor activated by breath which will set off a firework meteor shower in Whitworth Park on the opening night of the exhibition.