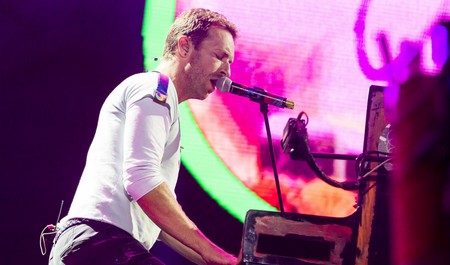 Coldplay paid tribute to the life of Linkin Park’s late frontman Chester Bennington by performing a cover of the band’s track “Crawling.”

The British band kicked off the North American circuit of their A Head Full of Dreams Tour at MetLife Stadium in East Rutherford, N.J., on Tuesday night.

Taken from Linkin Park’s debut album, Hybrid Theory, the best-selling debut of the 21st century, “Crawling” not only helped launch the nu-metal band to mainstream acclaim, but also earned them the trophy for Best Hard Rock Performance at the 44th Grammy Awards in 2002.

While Martin’s rendition of “Crawling” trades in the distorted guitars Bennington’s half-screamed vocals for the Coldplay frontman’s warm coos and rolling piano chords, it bears the same urgent, cleansing qualities.

Watch the touching cover below:

Martin initially messed up the beginning of the track, an Instagram video reveals. “I know this will probably end up on YouTube, so I’m going to get it right,” Martin said with a chuckle before restarting his cover.

Back at the start of June, Coldplay invited a German fan onstage to handle piano duties during the performance of their track “Everglow.” The fan played so well that Martin jokingly started walking off, saying, “Oh shit, I might as well go home. Thank you very much, I’ll see you later, you do the concert.”

The band most recently released their Kaleidoscope EP mid-July, which includes the tracks “A L I E N S,” “All I Can Think About Is You,” and their Big Sean collaboration “Miracles (Someone Special).”