The Best Restaurants In Bristol, England

Its historic port and university have made Bristol a diverse and multicultural city, with a wide variety of cultural influences. Our guide to Bristol’s culinary scene explores ten of the best cultural restaurants and cuisines in the city, from creamy Indian curries to Caribbean delicacies and Polish gourmet food. 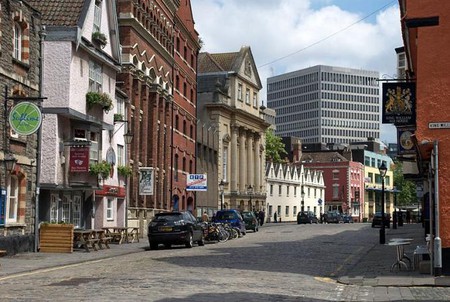 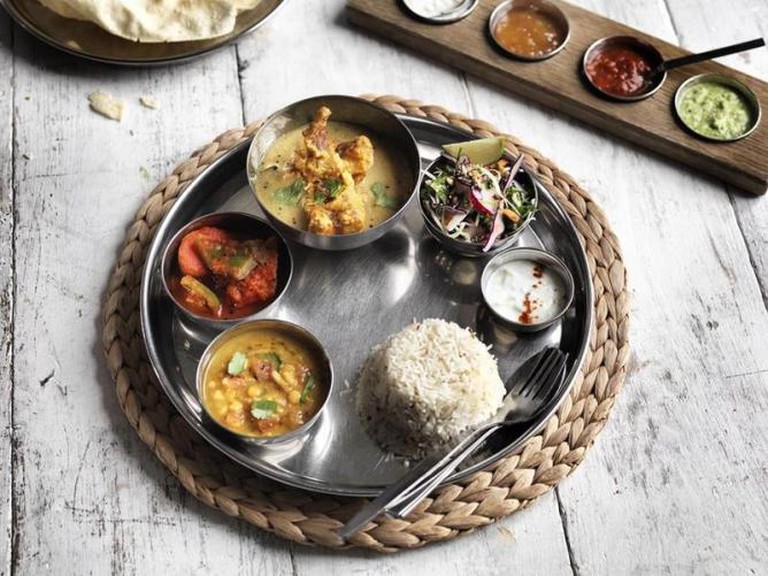 The Thali Restaurant Montpelier, Bristol | © Thali Café
Born of a desire to bring authentic Indian street food to the British dining scene (as opposed to the westernised dishes churned out by an average curry house) the Thali Café honed its culinary skills serving up its fantastic food to many a summer festival goer and then, eventually, opening up a restaurant in Bristol’s Montpelier area. Undoubtedly, its signature dish of Northern Thali is a highlight, being a wholly vegetarian affair, with the centrepiece a rich and creamy paneer curry. Thali Café has won several awards including a Radio 4 Food & Farming Award and an Observer Food Monthly Award.

Until 2011 Casamia was Bristol’s only Michelin starred restaurant, drawing inspiration from Japanese restaurant culture where restaurants change not only their menu but also the soft furnishings and décor along with each season. This means that a dining experience consistently offers up something fresh and new throughout the year whilst still using the best of British produce. So highly lauded is Casamia that it was named the nation’s best restaurant in a televised competition run by top chef Gordon Ramsay. 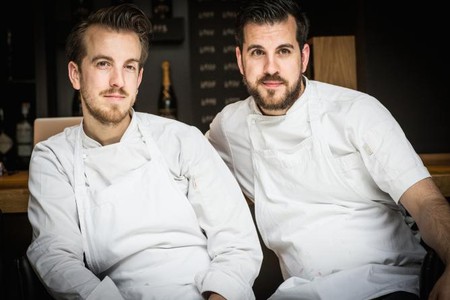 Jonray and Peter | Courtesy of Casamia

Glassboat takes the waterfront restaurant concept one step further by actually mooring itself harbour side in the centre of Bristol. A glorious decked-out vessel, it plays heavily on nautical nostalgia with polished wooden floors, luxuriously crafted oak surrounds and portholes along the hull that offer up magnificent views of the river. With a selection of menus through breakfast to dinner, it is worth trying out more than just the one meal here. 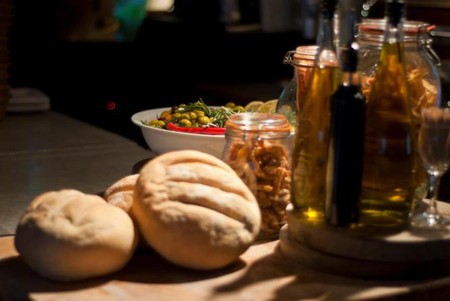 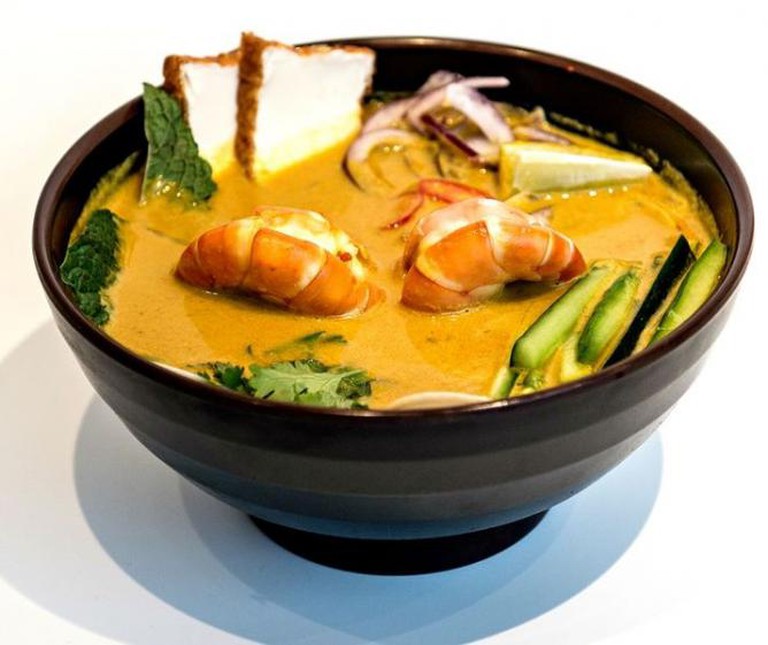 Tampopo, Bristol | © Tampopo
Rather than focusing on a specific region, Tampopo takes the best of Eastern cuisine and throws it all together, meaning that visitors can pick and choose from the tastes of the Philippines, Thailand, Vietnam, Malaysia, Japan and Korea never being short of Oriental possibilities to choose from. By mixing various food cultures, Tampopo creates a unique and distinctive style of its own, a sort of hybrid Asian cuisine that focuses more on the street food traditions of the area than the established restaurant market. Because of its location and great deals, Tampopo has become a bit of a haven for the local student population.

Bringing a bit of the Caribbean spirit to Southwest England, Turtle Bay recreates ‘liming’ (which translates as ‘relaxing with friends’) with its laid-back, rustic atmosphere and pared down decoration. An eclectic mix of flavours coming from Caribbean classics, such as goat curry and jerk chicken, go down all too well, especially when mixed with the vast array of cocktails available, usually including rum. Situated at the Broad Quay, harbour side, it is pretty much right at the heart of the city, making it a great place to lunch after a busy day spent shopping in the independent shops and boutiques of nearby Park Street.

A Taste of Poland

A Taste of Poland lays its cards out on the table very early on with its name. A small venue with the space to only really serve around 20 customers at one time, its décor is simple but stylish. In amongst the designer leather sofas, polished black tables and muted photography of Polish cities are some really hearty and heart-warming Polish dishes. Served up in abundance, the portions are plentiful and the food is authentic Polish cuisine with menu choices such as kotlet devolay or zraz wolowy treating the taste buds. 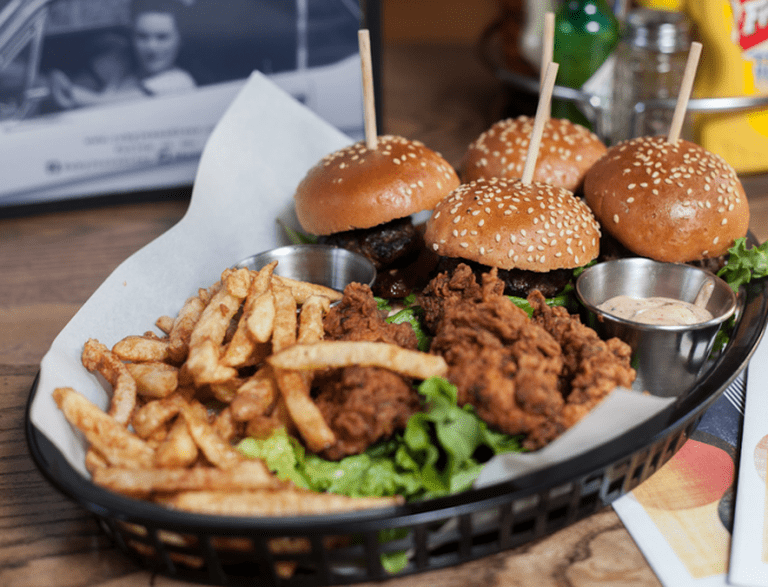 © Start The Bus
Doubling up as a brilliantly quirky bar and music venue, this independent site really comes into its own with its diner, Ruby Jean’s. Serving up a wholesome slice of pure Americana with a mammoth side of fries, this place hammers home the message of big and beautiful with stand-out dishes such as the mac ‘n’ cheese burger or the pulled pork with smoked chili jam. What really makes Start The Bus the haven it deserves to be is how it manages to both encapsulate a sense of the homely, corn spun spirit of the deep south while retaining a distinctly Bristolian vibe. 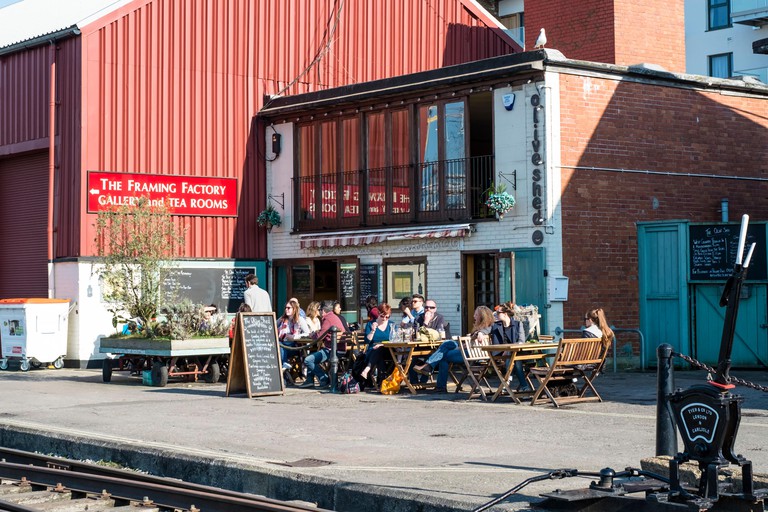 The Olive Shed Cafe | © Mr Standfast / Alamy Stock Photo
Hidden away in the backstreets of Princes Wharf is a real Mediterranean treat that may well have the best view in Bristol. From The Olive Shed’s first floor, guests can peer out over the Floating Harbour whilst tucking into the tapas. Serving up some of the finest olives in the southwest, they also, unsurprisingly, deal in a great range of seafood in addition to stocking local cheeses, breads, olive oils and vinegars available to take home. Fans of the restaurant include renowned chef Raymond Blanc who is quoted as saying, ‘I love this place, I hope you don’t mind if I copy some of your ideas!’ 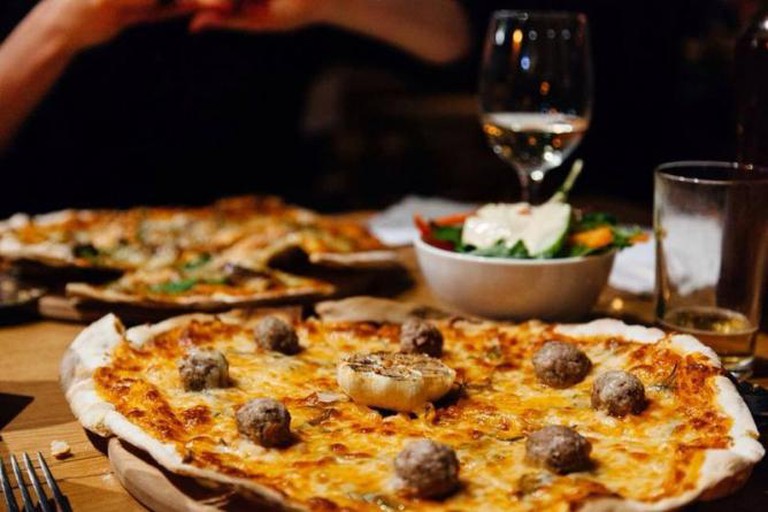 The Stable, Bristol | © The Stable
The Stable deals predominantly in pizza and pies, with a wide array of both on offer, all of which are made from organic (where possible) and responsibly-sourced ingredients. The twist is that The Stable brings a very British feel to the Italian staple of pizza with topping choices such as lamb roast or the Bridport Blaster (combining local pork and a tear-jerking amount of Naga chilies). Beyond that is the range of around sixty ciders, many locally sourced, that can either be had as an accompaniment to a meal, as a single on their own or even on a cider-tasting rack.

Bakery, Bar, Diner, Restaurant, European, Vegetarian, 0
Facebook
Email
Twitter
Pinterest
Copy link
Share
A former bakery, this deceptively large diner nods to its past with a painted advertisement for Victoria self-raising flour on the abutment from the ceiling. Other quirky touches at Bell’s Diner & Bar Rooms include typewriters, meat grinders and sewing machines strewn throughout the restaurant. Beautifully presented dishes that take inspiration from Spain, North Africa, Italy and France, to name but a few, are designed for sharing, which creates the perfect ambience for a meal out as a couple or with a group of friends.
Give us feedback