This Anglo-Saxon settlement has steadily grown to become the second largest city in the United Kingdom, after London. Already a medium-sized town in medieval Britain, today’s Birmingham is a burgeoning centre of culture, the heartland of Britain’s immigrant communities, and a fantastic spot for eating out. Dining options are numerous and inspiring, including Indian haute cuisine, artsy French bistros and pub-style British grub. Here are ten of the best cultural restaurants to be enjoyed in Birmingham. 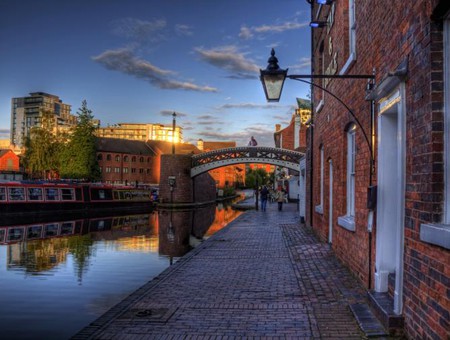 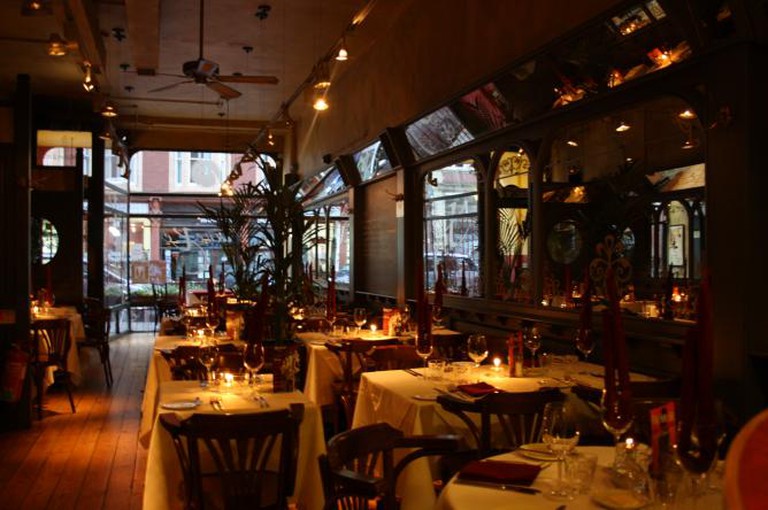 Annexe, Birmingham | Courtesy of Annexe
Those looking to enjoy traditional French and Italian cuisine in a laid-back surrounding need look no further than Annexe. Bringing an extra touch of class and sophistication to the dining scene of the West Midlands, this restaurant is a mix of flavours. Combining Mediterranean recipes with the modern feel of contemporary Great Britain, Annexe sublimely manages to blend all of these nuances together to create a thoroughly European dining experience in the heart of the UK.
Open In Google Maps
220 Corporation Street, Birmingham, West Midlands, England, B4 6QB, United Kingdom
+441212361171
Give us feedback

Located just outside of the centre in Edgbaston, Simpsons is a 70-cover restaurant housed in the luxurious surroundings of a grade II listed building. Diners can maximise the experience by booking one of their beautiful bedrooms to stay overnight in the relaxing atmosphere. The menu’s dishes use fresh ingredients selected daily and . there is also a distinct vegetarian menu on offer. 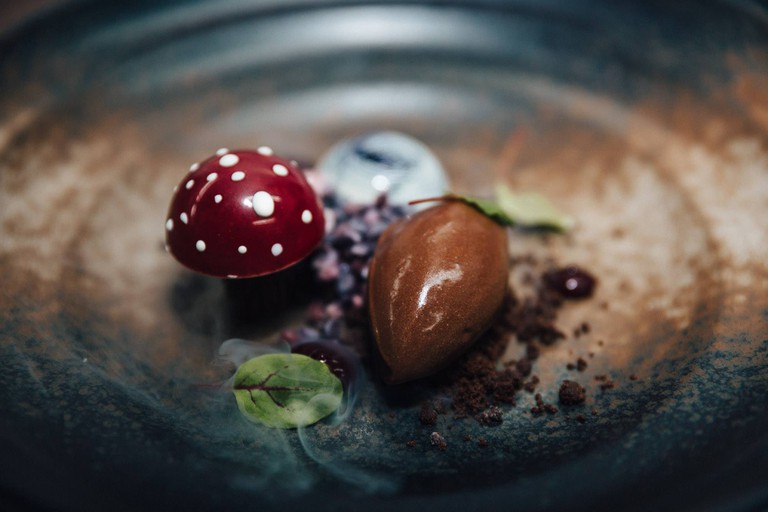 For those seeking a contemporary dining experience in chic, modern surroundings, Purnell’s is a great venue. Open since 2007, this medium-sized restaurant may be modern on the inside, but the outside is cased in Victorian redbrick and terracotta. The restaurant features a diners-only bar, where guests can enjoy fanciful cocktails or coffees.

Restaurant, British, French, $$$
Facebook
Email
Twitter
Pinterest
Copy link
Share
Map View
This restaurant is described as ‘a restaurant of taste’ by Chef Patron Richard Turner. Located just outside of the city centre in the picturesque village of Harborne, this restaurant is slightly cradled away from the hustle and bustle of central Birmingham. Turners has won, and been nominated for, several awards for food excellence. This year, Turners is also featured in the Top Table Diners’ Top 100 UK Restaurants.
Open In Google Maps
69 High St, Birmingham, B17 9NS, United Kingdom
+441214264440
Give us feedback

Bar, Bistro, French, $$$
Facebook
Email
Twitter
Pinterest
Copy link
Share
Map View
A taste of France in the city, this venue offers diners an eclectic culinary experience with a quirky, French flair. Le Truc oozes an Anglo-Franco hipster chic vibe, with French artwork gracing the walls, chandeliers casting soft hues from the ceiling, and playful artwork around the seating area. Paying homage to the mounted deer heads of hunting lodges, Le Truc has its very own stuffed animal head on the wall, in the form of a fluffy pink poodle. The menu is straightforward French-style cuisine, but there are also British-style dishes for those feeling less franc-atical about making the most of the French cuisine on offer. Dining is meant to be a cosy, relaxed affair at Le Truc, and this shines through with a modern and funky vibe.
Open In Google Maps
21 Ladywell Way, Birmingham, West Midlands, England, B5 4ST, United Kingdom
+441216227050
Give us feedback

The Lord Clifden has received waves of positive reviews in recent years and has been highlighted by numerous publications for its great food and drink. The menu consists of traditional British pub favourites, as well as international dishes, sourced locally. One of only two pubs in Birmingham to supply Budvar Yeast, and boating a fine collection of guest ales, this is a great venue for beer enthusiasts. The Lord is located in the Jewellery Quarter and has one of the best beer gardens in the city centre.
Open In Google Maps
34 Great Hampton Street, Birmingham, England, B18 6AA, United Kingdom
+441215237515
Visit Website
Give us feedback 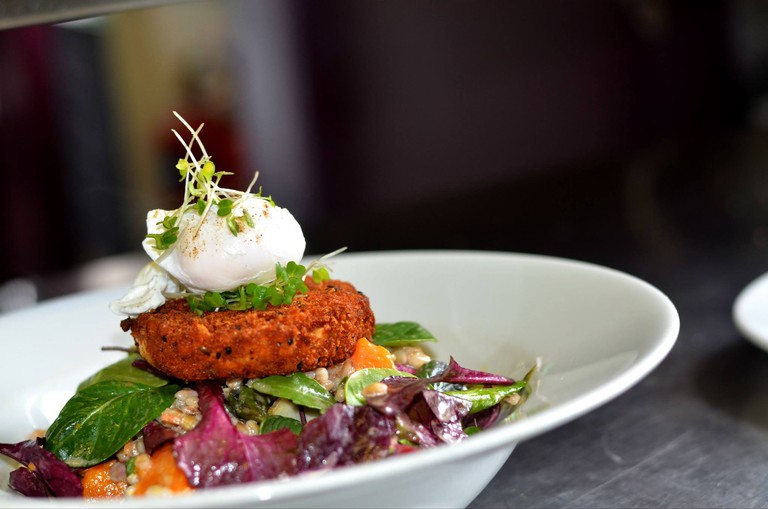 Described as ‘the greenest restaurant in the Midlands’, this café has been serving delicious, inspired vegetarian cuisine for around 30 years. The Warehouse Cafe is located inside the Friends of the Earth building and recently underwent a makeover, so the interiors are fresh and welcoming. A BYO restaurant, it does not sell alcohol, but there is no charge to bring your own. 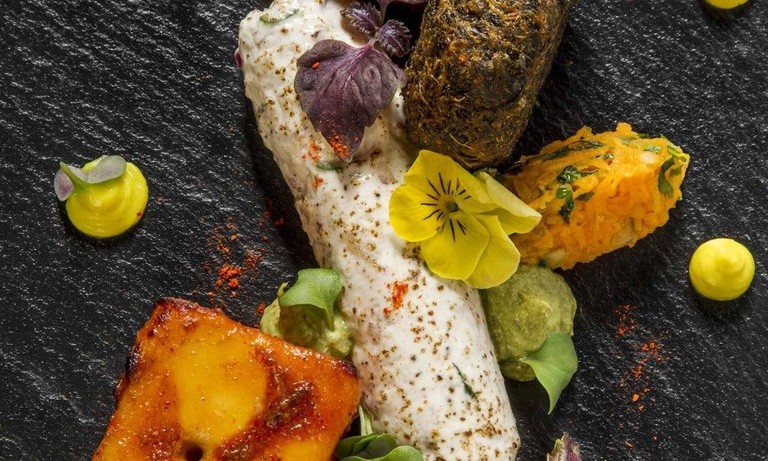 This award winning restaurant is widely considered to be one of the best in the UK. Situated in the Jewellery Quarter, Lasan has been featured by The Sunday Times as one of Britain’s Top 100 Restaurants. Accolades aside, Lasan maintains a passion for authentic Indian cooking, including elements of creativity and reinvention, and it cements this winning formula with a high quality of service and delivery of delicious, Indo-British cuisine. 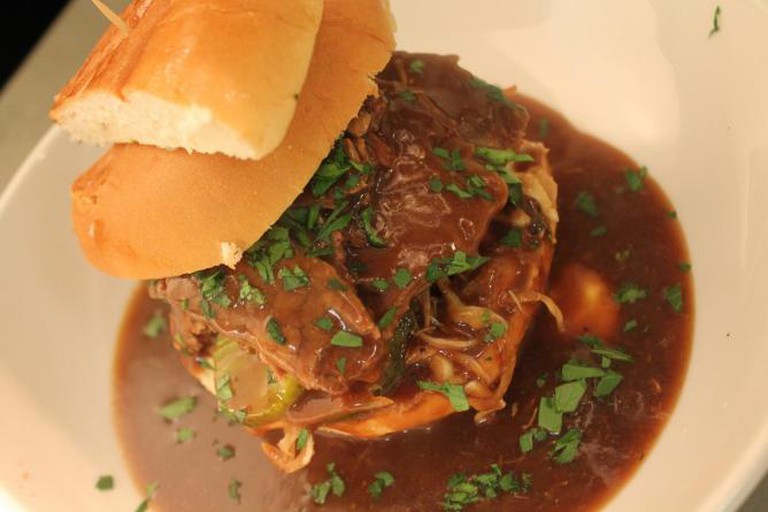 Ju Ju's Home Cured Salt Beef | Courtesy of Nishat Rahman and Tom Fathers
This Birmingham treasure offers some of the best restaurant views of the historic canals of the city. Describing itself as ‘Birmingham’s only restaurant with panoramic views over the canals’, this al fresco gem is perfection on sunny days, especially for brunch. Ju Ju’s Cafe serves fresh, locally sourced food (where possible) and uses free-range ingredients; there is also a fine selection of alcoholic beverages on the menu.
Open In Google Maps
100 Browning Street, Birmingham, England, B16 8EH, United Kingdom
+441214563384
Visit Website
Give us feedback
Give us feedback