The Story Behind England's 'Poison Garden' 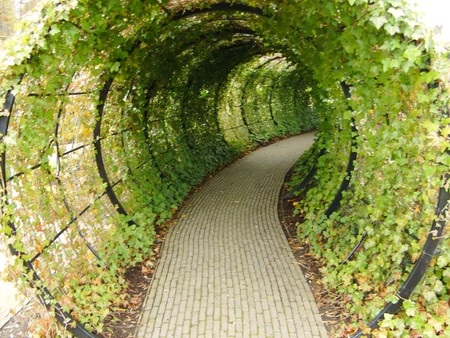 Alnwick Garden is one of the most popular tourist destinations in the north of England in its own right. But inside this beautifully landscaped, contemporary public garden, sits a smaller garden which is famous around the world— and it is truly extraordinary. It may be beautiful to look at, but it’s strictly look and don’t touch in this enchanting piece of land, in which every plant is toxic, and most are killers. Welcome to the Poison Garden.

The story of Alnwick Gardens begins in 1995, when Lord and Lady Percy became the 12th Duke and Duchess of Northumberland, making them the new owners of Alnwick Castle and its adjacent 12-acre walled garden. Although it had been a majestic and grand space in its past, the garden had fallen into disrepair during the 20th Century— it had been turned over for crop-growing as part of the ‘Dig for Victory’ campaign during the Second World War, and subsequently suffered during post-war austerity, closing as a public garden in 1950.

It was the vision of the Duchess of Northumberland, Jane Percy, which led to the garden’s regeneration. Leading designers from around the world were brought in to bring the project to life, including world-renowned Jacques Wirtz and his son Peter Wirtz, who designed the main structure. Now, behind a pair of 16th Century Venetian gates, there lies an astonishing complex of contemporary formal gardens featuring a labyrinth of bamboo tunnels, a central water cascade, a cherry orchard, a serpent-shaped garden filled with water features, and a monumental treehouse (one of the world’s biggest), home to a restaurant, bar and event spaces accessible by rope bridges. The garden is filled throughout with sculptures and cutting-edge lighting and water technologies, delivered by specialist designers. Impressive though it is, the garden is only two thirds built, having been delivered in phases determined by the success of its ongoing fundraising.

@wifetodarkness @spooktacular_ and @divineobscurity : Can we add The Poison Garden to the list of places to visit? I so want to go! #poisongarden #alnwickgardens #alnwick

The Poison Garden was opened as part of a series of new developments in 2005. It was entirely the creation of the Duchess, who was inspired on a visit to an apothecary garden in Italy, explaining how, ‘I wondered why so many gardens around the world focused on the healing power of plants rather than their ability to kill… I felt that most children I knew would be more interested in hearing how a plant killed, how long it would take you to die if you ate it and how gruesome and painful the death might be’.

As you might expect, the Poison Garden is kept behind a pair of black iron gates, with visitors allowed in under the supervision of specialist guides, who are thoroughly clued up on each of the 100 species of deadly plants and their grisly uses throughout history. Signs warning of the dangers faced by tasting, touching or even smelling the flora are numerous, although still not enough to combat natural human curiosity, it seems— in the summer of 2014, seven visitors fainted after inhaling toxic fumes.

The mix of deadly species ranges from the exotic, such as the strychnine tree of Southeast Asia (whose Latin name, Nux Vomica, gives a good indication of its toxicity), to those native to England, many of which people would not have known to be poisonous. One example is the common laurel hedge, which has often proved sinister to unwitting amateur gardeners, many of whom have been known to load up their cars with trimmings for a trip to the dump, only to fall asleep at the wheel under the influence of the plant’s fumes.

The Duchess (whose apparent fascination with death seems to have also manifested itself in an enormous taxidermy collection) has also used her Poison Garden as a means of education on drug use, growing plants like tobacco, cocaine (derived from the coca plant), the opium poppy Papaver somniferum, cannabis and magic mushrooms, with a license from the UK Home Office.

It’s not just the medicinal or deadly properties of her poison plants in which the Duchess has an interest, having spoken openly about her fascination with their aphrodisiac properties. Speaking to Smithsonian magazine about her favourite plant, the South American Brugmansia, she described how, ‘It’s an amazing aphrodisiac before it kills you. It’s an amazing way to die because it’s quite pain-free. A great killer is usually an incredible aphrodisiac’.

So, there you have it. The Poison Garden— one of the world’s most unique gardens, inside the country’s most ambitious new garden to have been created since the Second World War, and the brainchild of what may be the nation’s most unconventional aristocrat.