Beer Yoga Is a Thing... And It's Genius 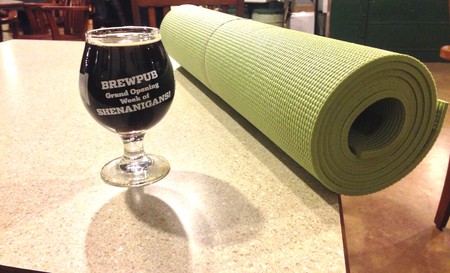 Yoga is great for sharpening the body and mind. Beer is known for its good times. Now the ever-efficient, beer-loving German nation has outdone itself and combined the two, popularizing the fabulously creative fitness craze of beer yoga.

Beer yoga’s alcho-physical charm soon spread around the globe and now enjoys popularity across Asia and Australia, another country known to enjoy a tipple.

Writing on the official BierYoga website, Jhula explains, “we take the philosophies of yoga and pair it with the pleasure of beer-drinking to reach your highest level of consciousness.”

One member of a class in Thailand told the BBC: “Without alcohol I might feel a bit shy. Alcohol makes me brave and [helps me] enjoy yoga.”

So if you’re a beer lover who likes yoga, a yogi who likes beer, or you’re just too shy to try yoga without some liquid courage, beer yoga could be your new favorite hobby.

It’s widely recognized that yoga’s popularity stems from focusing the mind on control of the body. An exercise in mental and physical one-upmanship, beer yoga concentrates the mind on both body and beer. The duel hobby, with twice as many things to focus on, has clear appeal for those looking to find their inner zen.