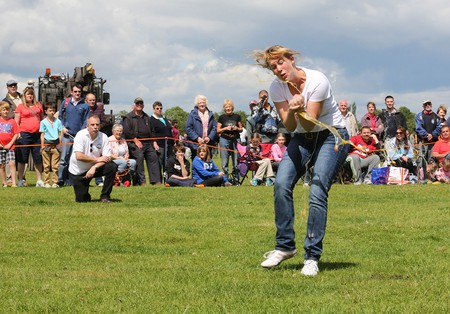 The strange sport of egg throwing returns, as the ancient village of Swaton in Lincolnshire, England, hosts the World Egg Throwing Championships this weekend.

According to the official World Egg Throwing Federations’ (WETF) own website, the sport has been around in some form or another since the early 14th century; ‘In 1322 when the newly appointed Abbot took possession of the Parish of Swaton by royal decree. It is said that he was the only person to own chickens and ensured the attendance at church of his peasants by providing them alms of one egg for each attendee. However, when the River Eau flooded, preventing people getting to church, the monks would hurl the eggs over to the waiting peasants.’

Currently, the WETF are developing the sport with the aim of bringing it to a wider audience, as well as getting official recognition from Sport England. Egg throwing is actually an umbrella term for five separate disciplines, which involve throwing and catching, aiming at targets, or simply smashing an egg onto your head.

Egg Throwing: Starting at 10m apart, teams of two people throw an egg to each other, getting further and further apart with each throw. The winning team is the one that completes a throw and catch from the furthest distance.

Egg Static Relay: Teams of 11 players stand in a line 100m long and must pass a pack of 12 eggs, one by one, from start to finish. The team who completes the challenge in the fastest time wins, but there is a three second penalty for each breakage.

Egg Target Throwing: Fairly straightforward, with competitors throwing four eggs at a target 24 feet (seven metres) away, only – the target is a person who has volunteered for the role. Points are awarded for hitting specific areas on said volunteer.

Russian Egg Roulette: Two opposing players sit across from each other at a table with six eggs on the table. Of the six eggs, five are hard boiled and one is left raw. Players take turns to select an egg and smash it against their own forehead, with the first player to smash the raw egg losing the contest.

Egg Trebuchet Challenge: Teams of at least two members build a machine based on a trebuchet design to launch projectiles. One team member chooses a place for another team member to stand at; when this team member is positioned correctly, an egg is hurled at them using the machine. Points are awarded to the team if the target team member catches the egg unbroken or if they are hit. Teams get three eggs each.

Fancy a game or want to find out more? Head to the WETF’s official website for more information.