An Introduction To Portishead In 10 Songs 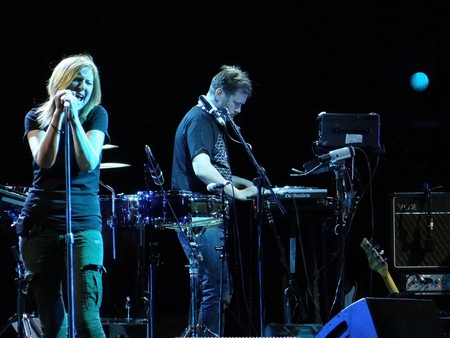 The trip-hop genre has always been heavily pigeonholed, but the progressive mindset and obvious taste of the sound have impacted music all across the spectrum, from the darkest and most impenetrable of experimental music to the biggest of pop artists. Portishead, one of the veritable pioneers of the sound, have been doing this for over 20 years, and they weren’t even present as a band for about eight of them. Off of a mere three albums, the band has gone on to influence the sonic possibilities of pop, hip-hop, and rock music for generations. Indeed, some of the greatest and most progressive sounds related to these genres in the modern day would probably never have come to be in the same way if it weren’t for fearlessly groundbreaking experimentalists like Portishead. That being said, here are 10 songs to help get a glimpse into the minimal yet incredibly dense musical world of Portishead.

Familiar with the theme music for the first season of True Detective? If it weren’t for the actual music chosen, this would fit into its place seamlessly, with its droning, sauntering tempo and eerie bending pitches, not to mention the hauntingly contrasted vocal crooning. And then all of a sudden, the heavily contorted sample of ‘never fall in love again’ seals the crushing deal on this beautifully heartbreaking track.

Dummy gained the band a reputation for being dark and eerie, but their self-titled follow up found them being downright creepy sometimes, and ‘All Mine’ is one of those instances. The thickly reverb-laden vocals coo ‘there’s nowhere to hide from me’ while trombones bellow on the lowest end of the pitch spectrum, and the guitar sounds like some kind of signifier of a computer failure. Overall, it just sounds like one gripping carnivalesque interpretation of a James Bond theme song that focuses on obsession gone too far. Lovely!

This song certainly follows the same slow tempo Portishead’s music is known for, but the song is relatively stark in contrast to the rest of their more popular material. It has all the same elements of their sound, yet the instrumentation to articulate it is shaved down quite a bit, which, impressively enough, doesn’t take away from the sound at all. It makes the song all the more impactful and meaningful to just how masterfully Portishead came into their sound in so few years and songs.

For all of their outright darkness, Portishead is just as savvy at portraying sweetness in a deeply messed up, sinister way. The song lilts on a cinematic, blues progression, and while this is going on, Gibbons’ tinny filtered vocal hums sweetly, but drops lines like ‘give me a reason to love you, give me a reason to be a woman,’ making the saccharine atmosphere suddenly gain a searing edge of pain and vulnerability.

This song never gets old. Coming out a startling 11 years after their second record, ‘The Rip’ has proved to be a perfect exemplar for the way Portishead not only never missed a beat with their sound but were also able to reinterpret their musicality in entirely new ways on Third, and so to stunning results. The track starts out as a tamed down folk tune until it suddenly breaks into a straightforward soft dance reminiscent of other musical singularities like The Postal Service.

Much in the same way as their contemporaries in Massive Attack, Portishead implemented some seriously hot beats in their music way before that was even a considerable factor in music outside of hip-hop. For being released in 1994, Beth Gibbons’ vocals sure resemble the kind of silky tonality that was integral to early 2000’s R&B. This track in particular sounds like it is more than ten years ahead of its time. Quite a rare thing to come by.

It’s both daunting and amazing how vague the trip-hop label can be. Being that they’re considered one of the pioneers of the sound, Portishead has had free reign to essentially do whatever they want with their sound, and it’ll still be included in the genre tag. And man, do they fully abide to that rule on ‘Over.’ Have you ever heard early-country acoustic guitar stylings, hard record scratches and faint operatic moans all come out sounding like the soundtrack to Dracula? If not, now’s the time to know what that might be like because it is way better than it sounds.

Accordion? Not something you hear every day in, well, much of anything in popular music. It’s almost unfair how this band is able to incorporate essentially anything into their sound and make it work so perfectly. The cowbell oddly keeps the rhythm propelling forward, and even if the eeriness of the verses is not easy to handle, the booming grand piano bursts at each chorus are SO worth it. And then the song begins to deteriorate entirely for a quick minute toward the end – it’s lovely how well the song keeps you on your toes!

‘Machine Gun’ is such an excellent case of taste and influence that it literally was a legal problem back in 2013 when The Weeknd may or may not have unlawfully sampled the cold robotic beat for his single ‘Belong to the World.’ Either way, this song is so cold and vacuously minimal that it’s insane how it could be in the same tracklist as a song like ‘The Rip’ and still make sense. Portishead’s electronic strengths play out more than any other song on this one.

In the here and now, songs usually need to start out quick, but even to the average listener with a short attention span, the softness of the wurlitzer in the intro would be hard not to get sucked into. Once the song fully blooms, sensual guitar whammy rides pulse around the outside of a full body of gothic, grandly romantic strings. Few songs make you want to be in love so bad from just the music alone!