An Introduction To Massive Attack In 10 Songs 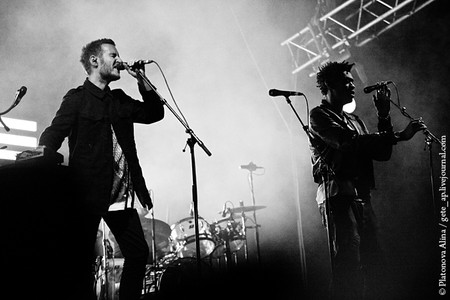 While they are by no means unknown, Massive Attack remains woefully underrated. Though they are certainly pioneers of trip-hop, this band’s trailblazing creative tendencies run so much deeper than a genre tag. One listen to anything in their early discography provides significant context and insight to more immediately recognizable artists (just compare Blue Lines and OK Computer). Here are 10 songs by this groundbreaking duo that prove the 1990s weren’t just about records like “Smells Like Teen Spirit.”

This song is a real testament to the grand, dramatic nature of this band. The fusion of large, engrossing strings with the soulful rhythmic bounce of the drums gives the track a soaring, beautiful ring, but with a little bit of an apocalyptic undertone. All of this happening in 1991? Progressive is an understatement. The introductory record scratches oddly set the tone for the track, with the rich vocals of Shara Nelson adding a whole new tonal dimension later on.

Who knew that breathing could be so gripping? Not only does this song boast a clearly masterful sense of synthesizers, but the layering of each tone really brings this song together into its engaging sound. From the simple legato piano drawl to the eighth note arpeggiated repetitions of the rhythm section, every breath literally sucks you in deeper and deeper every time.

The virulent piano flourishes throughout this song are just enthralling. Once the groovy, sensual heart of the song kicks in, the piano takes center stage. It’s curiously easy to imagine Sade’s sweet voice gliding over this song in particular, and Massive Attack’s career-defining dynamism really shines in this number.

The warmness of this record clicks along with a sparse, thumping, hip-hop influenced beat, eventually sucking you in with Massive Attack’s signature grand piano progression and haunting bass leads. Once you’re familiar with the eerie, droning intensity of Massive Attack, Cocteau Twins’ Elizabeth Fraser singing over one of their songs will make perfect sense to you. The fervent jumping between major and minor notes throughout the chorus displays the band’s songwriting prowess.

There’s no such thing as a simple melody with Massive Attack, and that couldn’t be any clearer than in this song. One of the warmer tracks on this list, ‘What Your Soul Sings’ features Sinéad O’Connor’s silky vocals with sweeping synth patches that eventually give way into glitched-out bleeps, all set over an increasingly sporadic trip-hop beat that is classic Massive Attack. Few bands can make six and half minutes go by so easily.

Possibly one of their most pop-friendly songs, ‘Paradise Circus’ does a unique thing in how it generally lilts in the same place, creating dynamic out of a static position. While that may sound completely contradictory, it really makes sense once you listen. Only the mighty string section in the last minute breaks the otherwise unflinching mid-tempo, eventually crystallizing into a quickly fading flash of synth. Brilliant.

The whisper, the tiny snare, the menacing bass hum… everything about this song is so visceral. If you’ve got quality headphones, this song can really conjure a claustrophobic feeling — if lyrics like ‘been here before, been here forever’ repeating while the song drops into a brief spell of utter monotony isn’t spine-tingling, it’s hard to say what is.

Part of Massive Attack’s Blue Lines remix collection, ‘Any Love’ represents a lesser-known, lighter side to this band’s dance music. The gentle bump of the bass and its accompanying snare claps make the song feel like it would be quite at home on a dance floor in the mid-1990s. Some of the melodic phrases even make it sound aesthetically similar to Erasure. This song is proof that no matter how much Massive Attack might change their pace, their work remains amazing.

Famous for being briefly featured in The Matrix, this song is simply crushing. Sara Jay’s ringing soprano hangs over the hazy instrumentation with a chilling clarity: ‘Say my name, I need a little love to ease the pain.’ No matter how heartbreaking that may sound, Jay still sounds so powerful and cool.

This pulsing, intense dance track will effortlessly get your heart racing, while UK heavyweight Roots Manuva drops some of the most hard-hitting statements in 2016’s musical landscape thus far: ‘Fear for fear but where time lives, secretly with those eyelids, all for one with one iris.’ All five minutes of this song sound like one enormous knowledge-drop, really.