An Introduction To Depeche Mode In 10 Songs 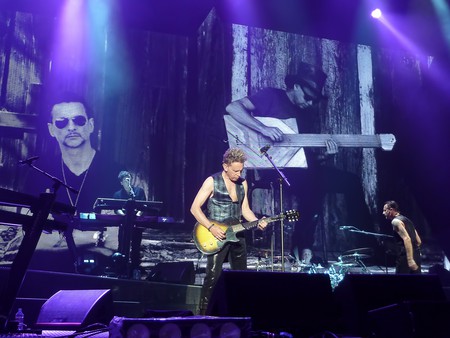 It’s always easy to blur Depeche Mode into the bigger picture of ’80s new wave, but the ways this band stood out and went above and beyond their peers are numerous. Their music requires some effort on the listener’s part, but it might be the band’s best asset; it’s not easily digestible, and it’s most often a very complex feat of progressive musicality.

You can hear their touch in music across all genres, from the darkest goth to the poppiest of electronic. A listen through their discography provides a glimpse into the earliest steps in the formations of a myriad of electronic styles. One of the most seminal acts in the last 40 years, here are 10 great songs, some less obvious than others, to get you started on Depeche Mode.

What better way to introduce Depeche Mode? This song is the perfect template to get the main gist of what this band is about: infectious melodies, over-the-top romanticism, dramatic vocals and wonderfully complex yet danceable beats. This song was very telling of the creative surge this band was about to have throughout the rest of the 80s, and still stands up on its own just fine today.

Coming from one of the two Vince Clarke-era albums, Speak & Spell, Clarke’s serious knack to create seriously dancey, borderline-techno beats reveals itself most interestingly on this deep cut. Throughout the song, the vocals take the backseat in the mix, drifting over the top of the pulsating proto-tropical beat in a phasor-drenched hiss. The most impressive part of it all is how timeless the electronics sound in the rhythm section. It has the kind of drive that wouldn’t at all sound out of place in any modern DJ’s mix — not bad, for being 35 years old.

This one’s one of the catchier, more playful tracks in the band’s arsenal and, curiously, one of their most political. With lyrics like “the grabbing hands, grab all they can, all for themselves, after all, it’s a competitive world: everything counts in large amounts,” Depeche Mode makes a very insightful and hilarious point about the inherent cruelties that come with an economic world model dictated by the free market and competition. Not only have they got you bobbing your head, they have you using it too!

The early 80s is definitely when Depeche Mode started to hit their stride. By 1986, they had already released two fantastic albums, Construction Time Again and Some Great Reward, and Black Celebration absolutely kept that streak up. Particularly with “A Question of Lust,” Depeche Mode first started to display their eerie ability to build up songs with larger-than-life vocal melodies that simultaneously get contorted by grim lyrics and wonderfully maligned by the bleakest of minor-chord shifts in the middle of said melodies, continuously tricking the listener and proving that they have so much more to offer musically than a simple, major-key vocal or synth chorus.

Forget The Smiths or The Cure — if you’re looking for some of the saddest, sappiest music to ever come out of the 1980s, look no further than this song right here. The song rings out hollowly as if it’s being played in an empty auditorium with merely vocals and grand piano, with ever-present outdoor ambience of conversations, the beach, children’s voices and more filling out the empty spaces. Always a hesitant romantic, Gore’s melodrama is so thick in this one, it could be cut with a knife.

It should be noted that, yes, this song is a little flat-footed, so to speak, in terms of its melodic nuance, but it is a noteworthy single from the Depeche Mode catalog nonetheless. This was the first single without chief songwriter Vince Clarke (who, by the way, went to front a particularly excellent electronic project himself) and was the most successful single the band had released yet. Regardless of chart placement, the song is an impressive demonstration in vocal harmonic work and synth programming —an outstanding achievement in electronic exploration in the name of pop.

This is a gentler, moodier cut from the cleverly self-aware Music for the Masses. In fact, this lovelorn track is incredibly self-aware, with lines like “they know my weaknesses, I never tried to hide them, they know my weaknesses, you tried them.” The dingy, echoing percussion and minimal synths faintly veiling the vocals really capture the feeling of betrayal and heartbreak like only this band could.

The second track on critical darling Violator, “Sweetest Perfection” is easily one of the darkest songs ever penned by the band. Over a restrained 6/8 romp, vocalist Dave Gahan muses on his well-documented heroin addiction (hence the song title): “The sweetest infection, of body and mind, sweetest injection, of any kind.” It all really humanizes Gahan’s experiences in addiction and delivers a superb song as a result.

Even if you don’t know this one by name, you’ve definitely heard it. This song is quite possibly the best representation of Depeche Mode at their artistic and commercial apex. While harnessing all of the elements that made them who they were throughout the 1980s — the arpeggiators, the grim lyricism, the intricate layering of electronics — the band managed to encapsulate all of the very best of these qualities and put out some of the most impressively well-executed, substantive electronic pop since… probably ever.

Coming out during Depeche Mode’s “comeback,” this song is magnificent proof that the band has the kind of songwriting touch that doesn’t fade with age, as so many long-running artists suffer from. Brooding and vulnerable, the song ushers in that special Depeche Mode charisma without straying from the bounds of muted tri-wave arpeggiations. The interplay between the grumbling guitar lead and icy synths in the last third just drives the point home — anyone can make electronic music, but no one can be Depeche Mode.