A Brief History of the Yorkshire Pudding 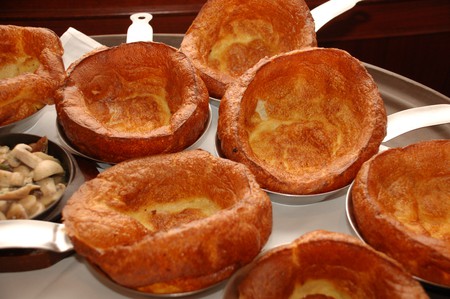 Ahh, the humble Yorkshire pudding! A roast dinner would not be complete without at least one tasty Yorkshire pud to fill up with gravy on your plate. If you’re visiting Yorkshire, you can’t not sample a traditional Sunday roast (preferably beef) and if you’d like to sample this local delicacy – certain pubs will even serve your dinner inside a giant pudding if you’re lucky! But how did the Yorkshire pudding make its way onto our plates and into our hearts?

If you don’t hail from the UK, you’ll probably turn your nose up at the thought of a savoury pudding made from an egg, flour and milk batter, designed to be served with meat, vegetables and lashings of gravy. Don’t mock it until you’ve tried it – the Yorkshire pudding is an essential ingredient in the traditional English roast dinner.

It was back in 1737 that the first ever recipe for ‘dripping pudding’, as it was then known was published in a book titled The Whole Duty of a Woman. Wheat flour had come into common use for making cakes and puddings, and cooks in the north of England had begun baking batter puddings while their meat roasted to make use of the fat that dropped in the dripping pan. Batter was placed in a hot pan over the fire with a bit of butter, then placed under a shoulder of mutton in the oven in place of a dripping pan to collect the fat.

{ SATURDAY ROAST } Yes, it tastes as good as it looks, and is only AED 95 including your first thirst quencher. Served with 2-4-1s from 1-7pm. #qwertydxb #mediaonehotel #gastrobar #saturdayroast #yorkshirepudding #gravy

Several years later, in 1747, Hannah Glasse published a similar recipe in her book, The Art of Cookery, renaming the delicacy as a ‘Yorkshire pudding’. Back then, the puddings were flatter than they are served today and would be served as a first course filled with thick gravy to help to suppress the diner’s appetite for expensive meat with cheap, plentiful ingredients. The main course of meat and vegetables would traditionally be served with a white sauce, the gravy used up for the pudding. Poorer households wouldn’t be able to afford meat, and would use dripping, flour, eggs and milk to make puddings which would be served with gravy as the only course.

Ever since, Yorkshire puddings have remained a staple of the classic roast dinner and a traditional British delicacy. Most pubs and restaurants tend to serve the puds with beef, or as the main part of Toad-in-the-hole, although they do occasionally pop up on plates with other meats such as roast lamb, pork or chicken.

Yorkshire Pudding with Pulled Duck, complete with mushy peas and jus… This winter dish is a complete winner! #giantyorkie

If you’re visiting Yorkshire for the first time, make sure you schedule in a meal in a traditional country pub on a Sunday to sample the delicious savoury tastes for yourself!