It’s not difficult to see how Burberry has come to be practically synonymous with British design. Aaron Paul declared ‘I’m just in love with Burberry. Always have been, always will be.’ Here are the top 5 reasons why Burberry will always be the jewel in the crown of British fashion. 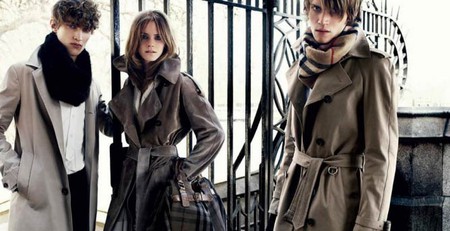 Founded in 1856, by a drapers apprentice Thomas Burberry, the business focused mainly on outerwear. In 1880 they introduced gabardine, a breathable, waterproof fabric, without which life in the rainy UK would have become distinctly bleaker. The durability of this fabric has meant that the design house has enabled some of the greatest adventures in history. Raoul Amundsen was outfitted in Burberry gabardine when he reached the South Pole, Earnest Shackleton wore a Burberry coat on his trans-Antarctic expedition, and George Mallory is presumed to have worn a Burberry jacket on his ill-fated attempt on Mount Everest in 1924.

The Burberry ‘Trench’ coat is a hallmark of British design. Copied in its thousands, from YSL to Primark, it has been hailed as a quintessential wardrobe staple. The coat earned its name from its original purpose of attiring the soldiers in World War I, however when the soldiers returned from the front, civilians quickly warmed to the gabardine coat. Its popularity increased as actors Humphrey Bogart and Audrey Hepburn imbued the Trench with Hollywood glamour. The coat has grown with the brand, now available in multiple colours, cuts, and styles. However, Burberry has still retained the true classic in ‘the Kensington’.

Instantly recognisable is the Burberry tartan of beige, grey, white, and red, known as the ‘Haymarket Check’. The pattern lines the Trench coat, the bags, and its scarves, with this integration of English design and Scottish tartan indicating the true Britishness of the brand. The iconic tartan has lost some of its appeal, when the brand faced losing the copyright of the tartan in China, allowing poor reproductions to be made, it diminished respect for the quality of the brand. Angela Ahrendts however, safeguarded the brand’s reputation by reserving the tartan for the iconic items in the collection.

Moving with the Times: A Personal Heritage

Since its humble origins in the 19th Century, the brand has had to keep up with changing society, not able to trust solely in its heritage status. So how do you adapt a tartan scarf for a modern audience? The answer: you monogram it. Burberry has led the way in monogramming, in a fast paced, disposable world, this service allows you to create a personal heritage piece that can be passed down. This was carried further by the introduction of the bespoke trench coat service famed by Emma Watson’s bespoke leather sleeved trench coat, is there a more practical heirloom?

The recent collection designed by Christopher Bailey had a folk look, made up of patterns, prints, and patchwork. The brand continues to stay true to its roots, making use of English lace, Durham quilts, and English fringed suede. The rich colours of teal, ochre, burgundy, and indigo invoke the feeling of a fairytale forest on the eve of September. The Burberry make-up line, developed in 2010, works on the premise of effortless make up. This season manipulated earthy smoky shades, with glowing skin, putting a modern spin on the English rose concept.