Most Beautiful Train Stations Across The Globe

In honor of Birmingham New Street Station’s reopening, we scoured the world for its most beautiful railway stations. Many feature a combination of different culturally specific forms of architecture, representing the continental interchange made possible through the establishment of railways themselves. Here are 13 of our favorites. All aboard! 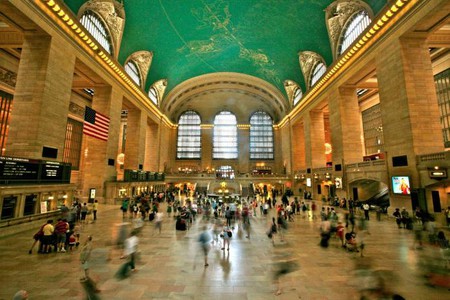 Located in Midtown Manhattan, Grand Central is the largest station on our list. It is 48 acres in size and has 44 platforms, which also happens to be more than any other station in the world. First opened in 1871, Grand Central was built at the height of American long-distance passenger travel. The ceiling depicts astronomical constellations that are more or less accurate. James Monroe Hewlett and Charles Basing painted it with the help of actual astronomers. To quell feelings of inferiority in the late 50s after the Soviet Union successfully launched Sputnik into space, Grand Central housed a Redstone missile for display. The missile punctured the astronomical scene and the hole remains if you look carefully. 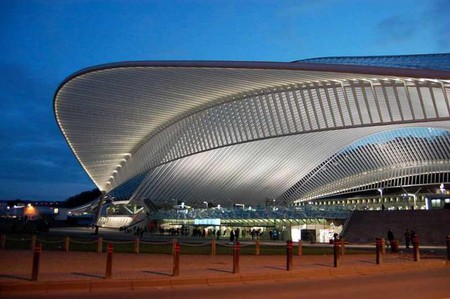 The next station on our list opened in Liège in 1842. This Belgian station was erected only three years after the first European continental railway station. It was virtually torn down in 2009 by famed Spanish architect, Santiago Calatrava and replaced with the modern model that can we see today in 2013. The new station is made of glass, steal, and white concrete giving it a transparent and almost extraterrestrial appearance. All tracks were modernized to allow for high-speed transit at each of its platforms. The station is considered a symbol of Liège’s modernization.

After the Crimean War, the Ottomans conceded that it was necessary for there to be a railway connecting Istanbul to continental Europe. After multiple legal conundrums, the railway was finally opened in 1890. August Jasmund, a Prussian architect, designed the terminal building. Its architecture is famous for its embodiment of European Orientalism. The trains running from Europe to Istanbul Sirkeci Terminal were called the ‘Orient Express.’ During the 1950s and 1960s, the station’s restaurant was an important meeting place for writers and journalists of the time and is still in operation today.

In English, ‘Paris’s East Station’ was opened in 1849. François Duqesnay designed the station’s main platform. Philippe Joseph Henri Lemaire sculpted its façade to be reminiscent of the city of Strasbourg, the station’s original namesake.. After renovations in 1931 the Gare de l’Est was doubled in size and intended to mimic the original portion of the station through its symmetrical construction. The drastic increase in size had a major impact on surrounding neighborhoods. The Gare de l’Est was the site of the Orient Express’ first departure to Istanbul.

Completed in 1916, this Caminho De Ferro De Moçambique is in Maputo, Mozambique. The station, which in English means ‘Mozambique Ports and Railways,’ was designed by a team of architects. Although none of them were Gustave Eiffel, today some erroneously attribute the station’s design to him. The station’s façade is elegant, and features at its center a mint green wrought iron dome. The railroads extending from this station were major targets of destruction during the Mozambican Civil War that occurred from 1977-1992 and are now being rehabilitated. Today, in addition to serving as a functioning train station, it is host to many cultural events, from Maputo’s fashion week to live concert performances, making it an important landmark in the city. 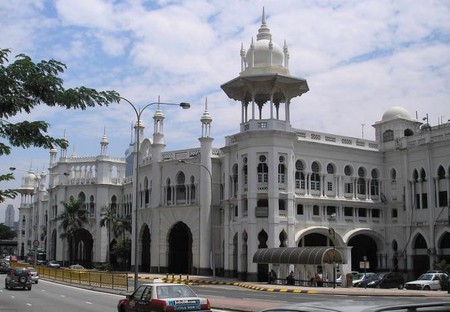 Kuala Lumpur Railway Station was completed in 1910. Its architecture is a blend of Eastern and Western design executed by Arthur Benison Hubback, a British architect. Specifically, this radiant white building is constructed in styles referred to as Neo-Moorish with incorporated elements of the Anglo-Asian style, which was popular in many distinctive buildings in Malaysia during and shortly after the colonial era. For example, the station is comprised of many ogee and horseshoe arches. Today the station operates primarily as an historic railway museum and cultural center. 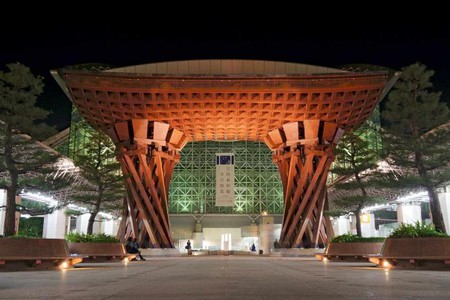 Kanazawa Station first opened in 1898. Since 1987, it is privately owned and operated by Japanese National Railways and Japan Railway Company, respectively. The station’s east entrance features a modern interpretation of a Japanese Shinto shrine. Each leg of the large wooden pillars that comprise the entrance is also reminiscent of the traditional kotsuzumi drum. Beyond its iconic entryway, the station features a massive glass latticed atrium enclosure called the Hospitality Dome. Within the atrium there is a small stream that flows into a two-story manmade waterfall, providing a peaceful and comfortable ambiance inside. 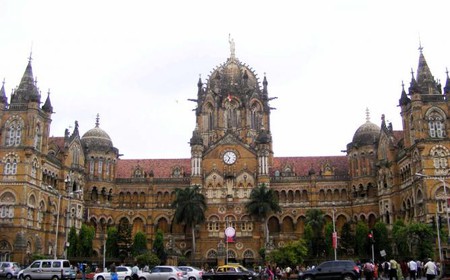 A UNESCO World Heritage Site, this station in Mumbai was built in 1887. Its design is a blend of Gothic Revival and Mughal architecture. Much like a traditional Indian palace, the structure of the station includes turrets, ornamental brass and iron metalwork, tiles, and pointed arches. It is named after Chhatrapati Shivaji, the founder and king of the Maratha Empire. Frederick William Stevens designed the station, and today it serves as the headquarters of the Central Railways, one of the largest zones in India’s railway system. The station was also the location of the filming of AR Rahman’s Jai Ho Bollywood style dance performance in Slumdog Millionaire. 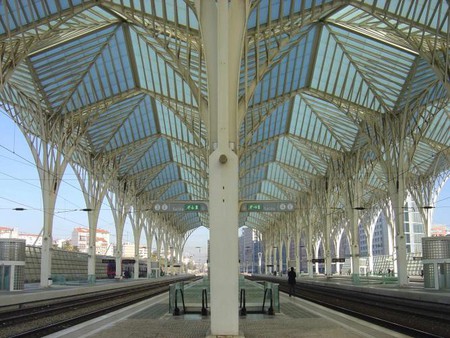 Gare do Oriente is located in Lisbon, Portugal. Like the Liege-Guillemins, it was designed by Santiago Calatrava. Its Gothic style is often likened to Brookfield Place in Toronto, which Calatrava also designed. Construction finished in 1998 in time for the Expo ’98 World’s Fair. Its open-air design was inspired by the fact that the former station was an imposing barrier between the city and the adjacent river. Inside Gar do Oriente, there is also shopping center, two bus stations, and a police station. Additionally, there are pedestrian walkthroughs seamlessly incorporated into the structure. Its apparently lightweight geometric configuring falls is compared to both a futuristic, synthetic forest and a gothic cathedral. 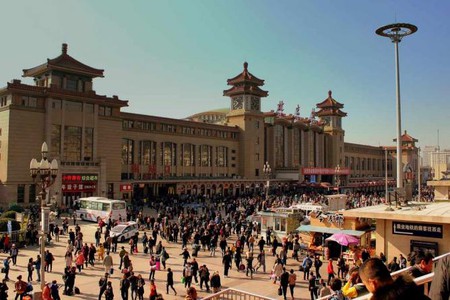 Beijing Railway Station was built in 1959. The station stands out for its large turrets situated on each side of the main building. Acclaimed architects of the time Yang Tingbao and Deng-Ao were responsible for its design, and as many as two million individuals worked on its construction. Architectural experts from the Soviet Union were also commissioned to assist in the project. Chairman Mao himself did the calligraphy for the characters located on the railway station’s sign. Beijing Railway Station embodies a melding of both traditional Chinese design and Soviet architecture. The station contains a medical clinic, a movie theater, several large waiting rooms, restaurants, and a post office. 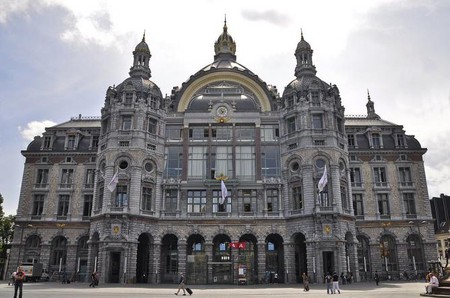 Also located in Belgium, Antwerp Centraal opened in the summer of 1905 after ten years of construction. Jan Van Asperen, Clement van Bogaert, and Louis Delacenserie designed various structural elements of the building. This station is one of the most renowned throughout the world for the architectural brilliance of its eclectic style. Antwerpen Cenraal underwent major restoration efforts in the past few decades, and in the late 1990s the station was renovated to accommodate more modern, high-speed trains. Today, it is subject to much acclaim, having been lauded for its beauty in publications like Newsweek and Mashable. 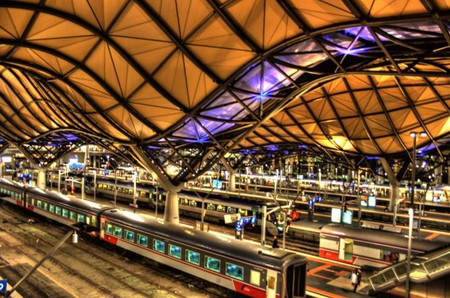 This modern Melbourne station was originally built in 1859. Albert Charles Cook designed the original building, but it was drastically renovated in the 1960s with the objective of modernizing it. In the early 2000s it experienced another wave of reconstruction and expansion to include over 40 stores and eateries under the design of Grimshaw Architects. This is when the station also received its iconic wavy roof. It was awarded the Royal Institute of British Architects’ Lubetkin Prize upon its redevelopment. In 2014, its historic Water Tower Clock was returned after being situated in various other Melbourne stations for the past several decades. 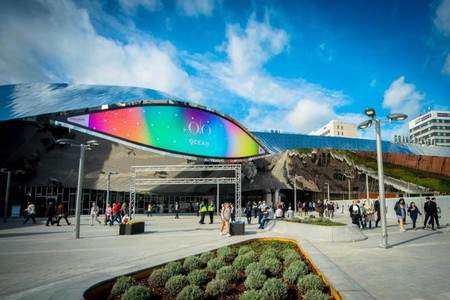 Finally, to close out our list is Birmingham New Street Station located in Birmingham, England. It was not always thought of as beautiful, however. In 2003 Country Life magazine voted it one of the major eyesores in the United Kingdom. It was also ranked at a pitiful 52% level of customer satisfaction at the time. Almost £400 million and five years of construction later, the new and improved station was completed. Distinguishing features of the new station include a larger atrium that allows for more natural light to enter the interior and a state of the art ocular façade. Birmingham New Street officially reopened in September of this year, and continues to play a central role in the British railway system.