Reasons Why You Should Visit York, England 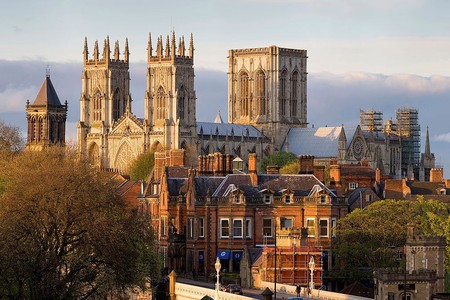 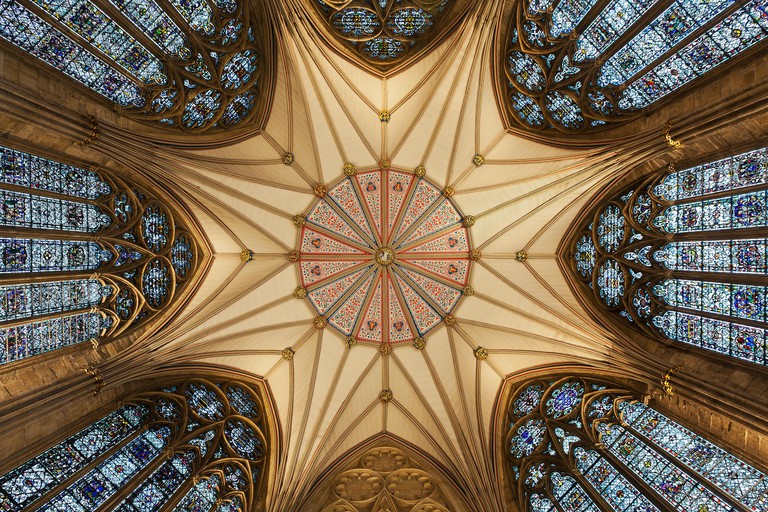 © Design Pics Inc / Alamy Stock Photo
Got stamina? Test it on the 275-step spiral stair up to the city’s highest point: the top of York Minster’s Central Tower. It’s so tall it could swallow the Leaning Tower of Pisa whole. Look out past the Minster’s ornate West Towers over York’s diverse rooftops and gardens; spot the one behind Grays Court – the oldest inhabited house in town. Non-climbers have plenty to gawp at in the cavernous, vaulted Minster, which drips superlatives: England’s widest gothic nave; and Britain’s largest stretch of Medieval stained glass – the scarlet-and-azure saints and angels of the 15th-century Great East Window were recently restored. Don’t miss the dynamic displays in the Undercroft, for the ruins of Roman barracks, a carved Viking horn and illuminated gospels. 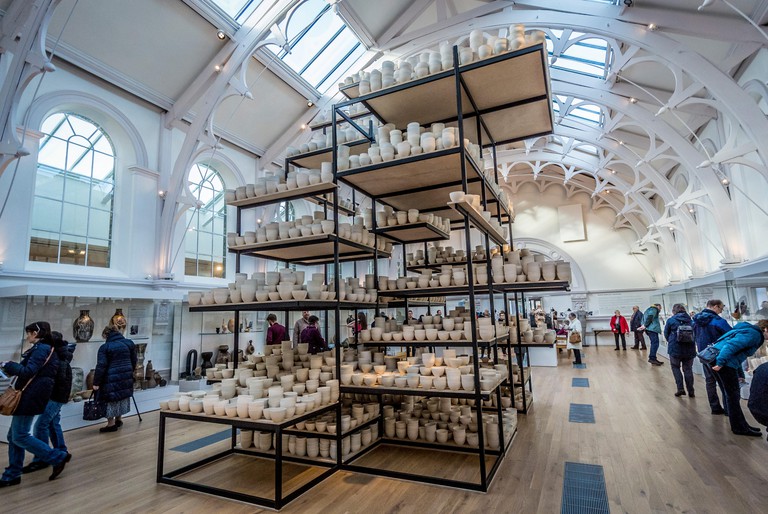 © Pixel Youth movement / Alamy Stock Photo
The multitude of artists and makers working in York today are as creative as their Medieval counterparts, and the annual Open Studios showcase everything from salt-glazed vases to felted animal collages. The studios at Rogues Atelier offer workshops in upholstery or silver bangle-making; and York has dozens of indie galleries and exhibition spaces. Try According to Mcgee, where photorealism hangs out with Turneresque abstracts. Mosey around the Art of Protest Gallery for international contemporary art, say, Magnus Gjoen’s unsettling skull paintings or Jo Peel’s moments of city life. Upstairs in York Art Gallery, a colourful 17m (56ft) wall of pots represents York’s long history through ceramics – Roman to the present day. There’s even art on the walls of the unique Fossgate Social down the road: cafe by day, bar by night. Its fairy-lit, verdant courtyard is perfect for cocktails after sunset.

A wander down the Shambles 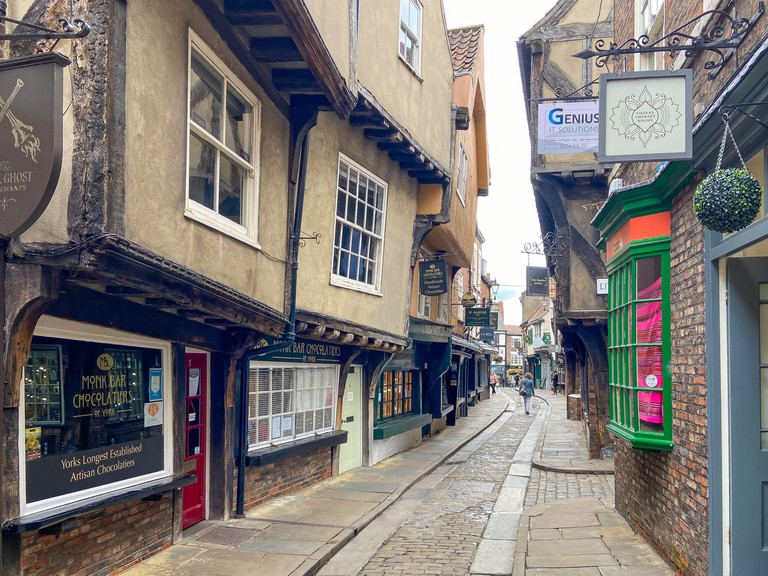 © Greg Balfour Evans / Alamy Stock Photo
This photogenic Medieval street, with its overhanging half-timbered houses, inspired the designers building Diagon Alley for the Harry Potter films. Once full of 15th-century butchers, now the narrow, cobbled lane brims with artisanal chocolatiers and vintage cafes (try the Flax and Twine, serving freshly baked scones above a little antiques store); it’s easy to imagine Ollivander’s wand shop tucked in among them. Halfway along the Shambles, look out on the right for the Shrine of Margaret Clitherow, an oasis of calm among the camera-clutching tourists. 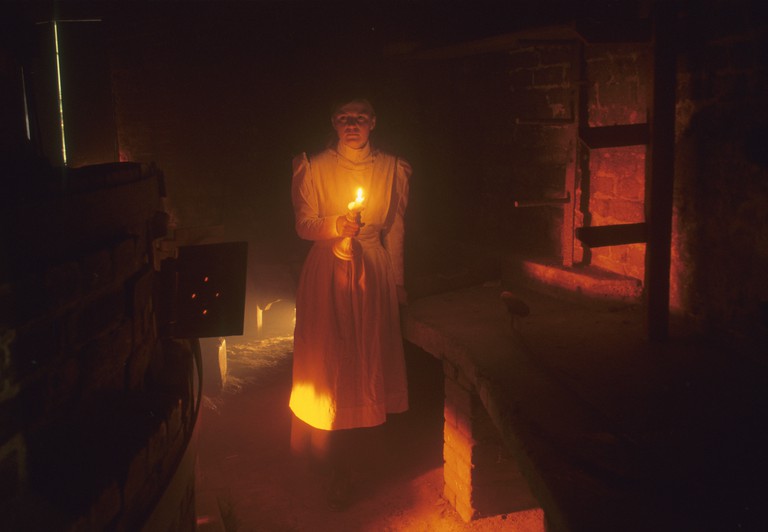 © MasPix / Alamy Stock Photo
York is Europe’s most-haunted city and the Golden Fleece is its most phantom-infested pub, with 15 resident spectres. A police officer reported hearing funeral music late one night from nearby St Crux Church. Meanwhile Bedern Hall, down the lane, is haunted by murdered orphans. You can hear the city’s scariest stories on the Original Ghost Walk of York, the world’s first ghost walk, and now one of many spooky, after-dark offerings. Thespian guides take you down dimly lit alleys into hidden corners to talk about the theatre’s “grey lady” or the Roman Legion that marches through the Treasurer’s House cellar, visible only from the knees upwards.

A glimpse into the past at the JORVIK Viking Centre 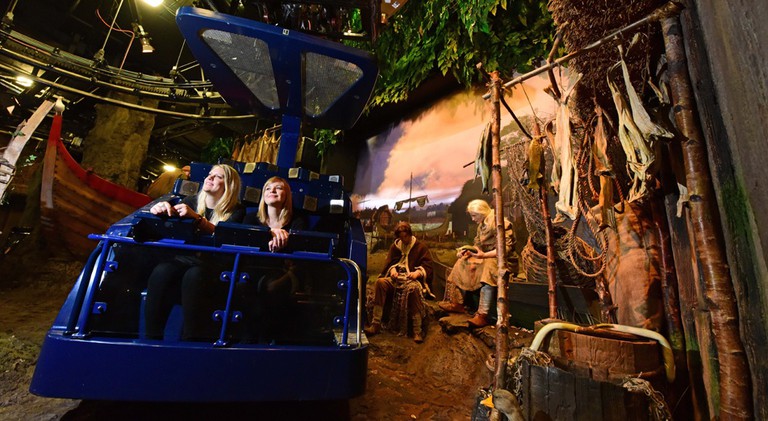 © JORVIK Viking Centre
In 866CE Ivar Ragnarsson and his army arrived in York, and Saxon Eoforwic became Jorvik – capital of a Viking kingdom. Lots of road names end in “gate” after gata, the Viking word for street. Coppergate was dug up in 1972 for a new shopping centre, revealing hoards of Viking relics. The JORVIK Viking Centre on Coppergate is a popular ride-through attraction recreating the sights and sounds (as well as smells!) of 10th-century Britain with animatronic fishermen, huntsmen and blacksmiths. 6m (20ft) down, you can see the actual remains of an ancient fire pit and feel the frisson of discovering buried Jorvik, the once-bustling Viking town. 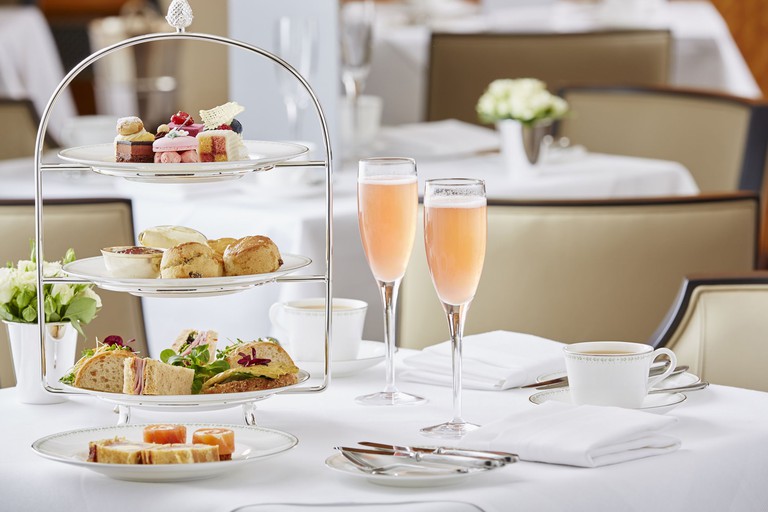 © Bettys
The classic gold lettering and Tiffany-style stained glass of this venerably genteel tea room face onto St Helen’s Square, with its buskers and old-fashioned street lamps. The art deco interiors, opened in 1936, channel the grandeur of the Queen Mary ocean liner, also launched that year. Elegant little cakes – macarons and battenberg, for example – are in keeping with the white-clothed tables, pretty china cups and uniformed waitresses, but most people’s favourite buns at Bettys are more robust: the cheerful Yorkshire-speciality Fat Rascals, bursting with almonds and glacé cherries. 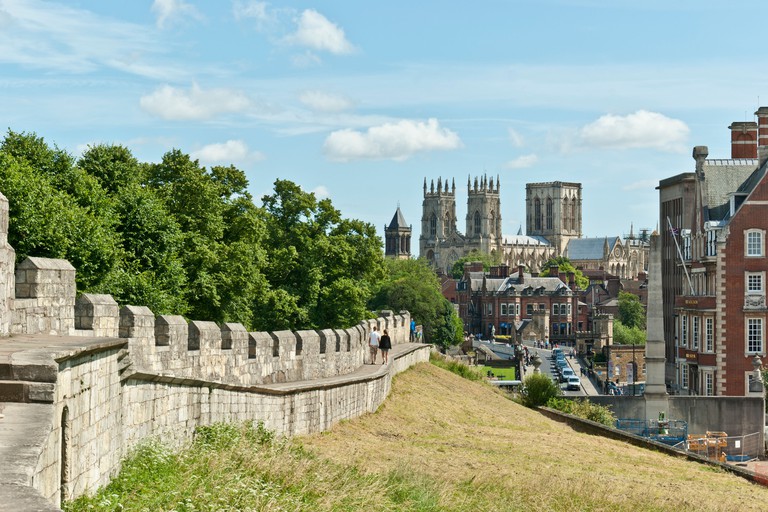 © Alan Pembleton / Alamy Stock Photo
Step up for grand views of the Minster and close encounters with York’s four main Medieval bars, or gateways, including Micklegate Bar, which once displayed severed heads of traitors. Where York’s city walls stand were once Roman fortifications and, through the glass floor of the Croque-Monsieur cafe built into Bootham Bar, there’s a glimpse of the defences underneath. Walking atop the walls you can all but cover a circuit of the city (almost two miles). It’s a great, traffic-free way to get from the railway station to Clifford’s Tower, built by William the Conqueror, and on to Walmgate Bar, where there’s a comfortable cafe inside.

Browsing its many book shops 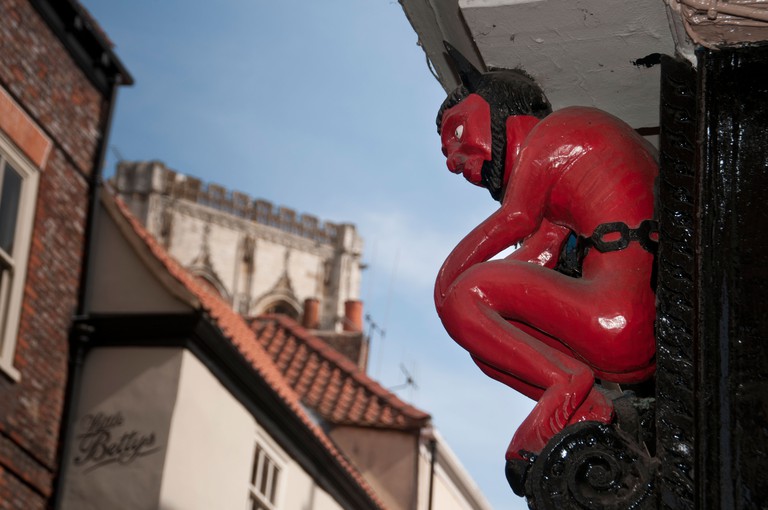 © Travstock / Alamy Stock Photo
The narrow York lane known as Minster Gates was once called Bookbinders’ Alley for the many booksellers here: above a gift shop, a statue of Minerva, Roman goddess of wisdom, leans on a pile of tomes. On nearby Stonegate a red printer’s devil (as apprentices were called) perches above the archway leading to Barley Hall: once it advertised a print shop. York’s many outlets still offer an impressive collection of the rare, the antique and the second-hand, and specialist bookshops hide on winding streets. Among them: Lucius Books, near the railway station, loved by collectors for its first editions and signed copies; and Fossgate Books, perfect for anyone with niche interests, thanks to a staggering array of books on unusual subjects.

The greatest railway museum in the world 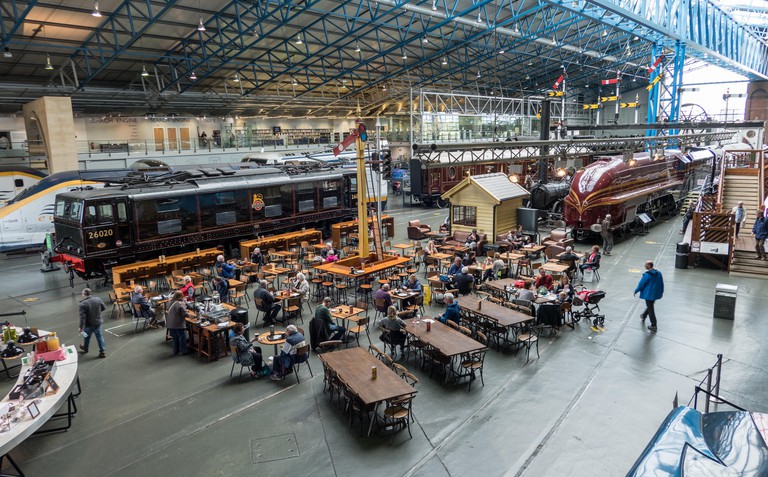 © Stephen Sykes / Alamy Stock Photo
If you love rail travel, this is the city for you: from Stephenson’s famous yellow Rocket to bulbous early Japanese bullet trains, The National Railway Museum is the world’s largest of its kind, spanning three centuries of curiosities. Keep your eyes peeled for wrought-iron station benches and old anti-spitting signs, and admire Queen Victoria’s velvet-bedecked royal carriage (a “palace on wheels”) and the blue Mallard: its record-breaking 126mph (203kmph) has not been beaten by a steam locomotive since 1938. With working model railways and ride-on miniatures, kids will love it.

A cruise on the Ouse 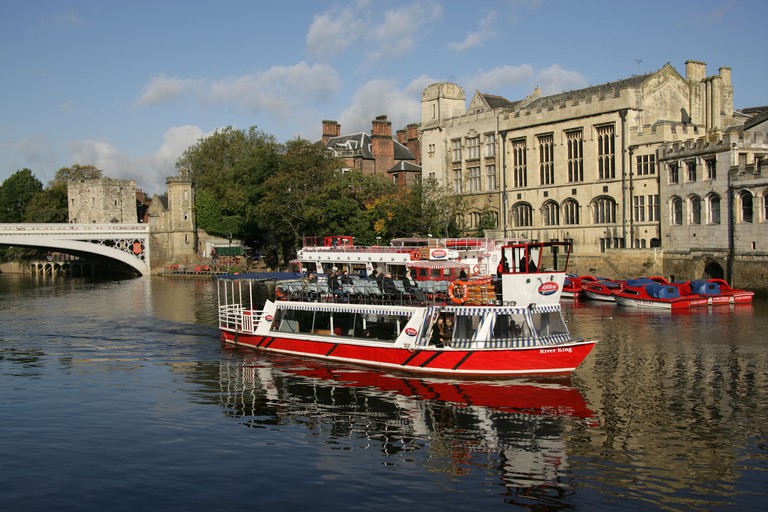 © UK City Images / Alamy Stock Photo
Viking longboats arrived on the River Ouse and linked the city, via the Humber, to the North Sea coast. Vessels on York’s main river today are leisurely cruises under the stone arches of Victorian bridges, taking tourists past old riverside buildings including the 15th-century Guildhall, while dispensing historic details, from early invasions to dramatic recent floods. There are several in operation, with various durations and departure times: go for a late-evening trip on the Yorkboat: the on-board bar serves local beers as you sail to the Bishopthorpe Palace and back, past pale herons and floodlit willows, to a soundtrack of 1950s jazz. 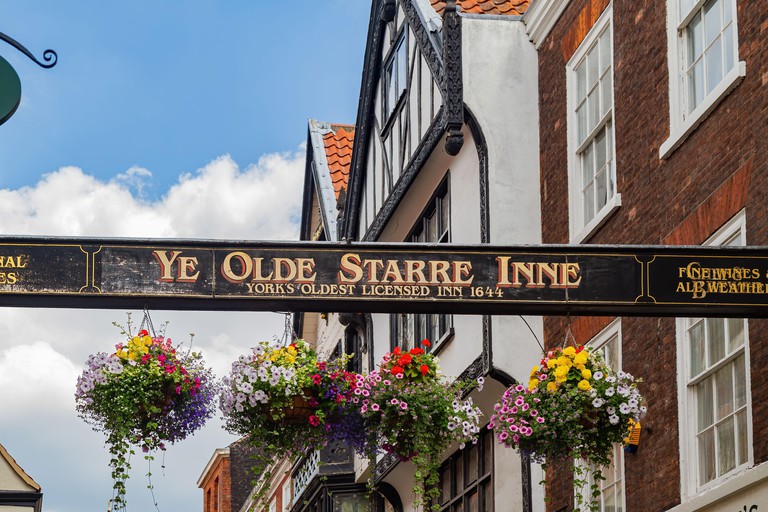 © Chon Kit Leong / Alamy Stock Photo
York is said to have as many inns as days of the year and an infinite number of pub-crawling routes. Traditional pubs are scattered citywide, with open fires and murky pasts – from the much-flooded riverside Kings Arms to the Medieval Guy Fawkes Inn, named after the Gunpowder Plot conspirator, who was born nearby in 1570. York’s oldest serving hostelry is Ye Olde Starre Inne on Stonegate; Civil War casualties were tended to here in 1644, when it opened, and the “old star” was probably Charles I. Be prepared to duck under beams and wait for a seat as these pubs tend to be small. Use the time to sample local beers, including York Brewery’s award-winning dark and smoky Centurion’s Ghost Ale. 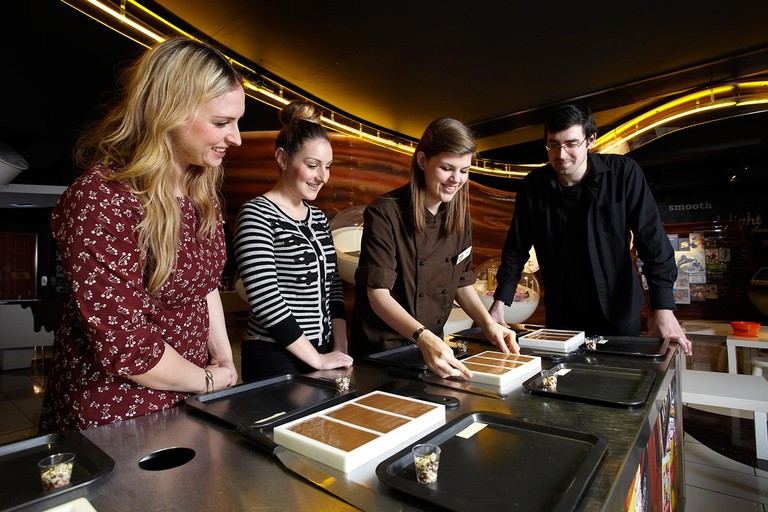 © York's Chocolate Story
Some cities were prospered on steel or wool. York was built on chocolate; still made here after more than 300 years. Saluting the sweet success of local pioneers such as the Rowntree and Terry families, the city produces millions of Kit Kats a day; the Chocolate Orange, Smarties and other world-famous names were also invented here. York’s Chocolate Story is an interactive experience and every room has samples, from a cup of unsweetened chocolate with chilli to a make-your-own white-chocolate lollipop. There’s a shop and cafe for souvenirs and an onsite chocolatier, whipping up inventive fresh fillings, including mango and cardamom.
Give us feedback