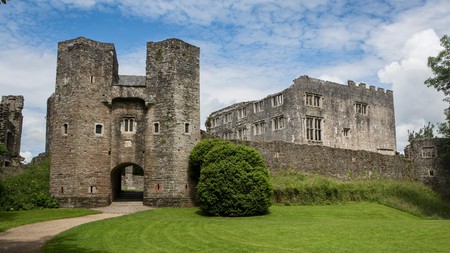 A trip to Devon or Cornwall is an opportunity to look back in time at the long and fascinating history that both counties share. The many ancient stones there show how humans first settled in the region thousands of years ago. But for a glimpse of the more recent past, a visit to a castle makes for an informative and scenic day out. Read our guide to the most incredible castles that both counties have to offer. 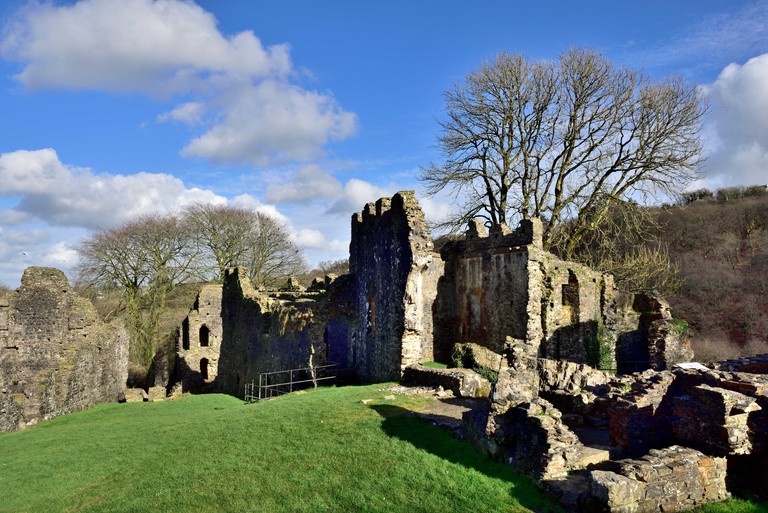 © Charles Stirling / Alamy Stock Photo
One of the oldest castles in Devon but now a crumbling ruin in glorious woodland, Okehampton is a Medieval motte and bailey castle that was built between 1068 and 1086 following a revolt in Devon against Norman rule. It’s worth a visit for its incredible history and status as the largest castle and fortress in Devon. It was left to rack and ruin after its last owner Henry Courtney was executed by Henry VIII and it’s said to be haunted by Lady Howard, who supposedly murdered her four husbands.

Nestled in a quiet wooded valley with stunning views of the South Devon countryside, Berry Pomeroy is a romantic Grade I listed ruin that’s said to be one of the most haunted castles in Britain. Unusually, there are two castles on the one site: a Tudor mansion built by the Seymour family enclosed within the walls of an older Norman building. The land was originally given by William the Conqueror to Ralph de Pomeroy in the 11th century as a reward for his support and loyalty during the Norman invasion and the Battle of Hastings. In the 13th century, his descendent Henry de Pomeroy oversaw construction of the castle, and it stayed with the Pomeroys until the late 1540s when it was then acquired by Sir Edward Seymour, who made additions to the castle. He was later executed on the orders of his brother in law Henry VIII, and the castle was abandoned in 1688 and fell into ruin. In 1977, English Heritage took over its management and restoration.

Historical Landmark
Facebook
Email
Twitter
Pinterest
Copy link
Share
Map View
Originally built as a motte and bailey castle in 1106 on the orders of Henry I but with additional building work in the 13th and 14th centuries, Tiverton gives you an incredible insight into 900 years of history. Over the years it’s been home to powerful Medieval Earls of Devon as well as a Plantagenet Princess. During your visit, you can also enjoy a glorious walled garden, woodland, an orchard and to interact with what’s on display, such as trying on Civil War armour and touching a cannonball. 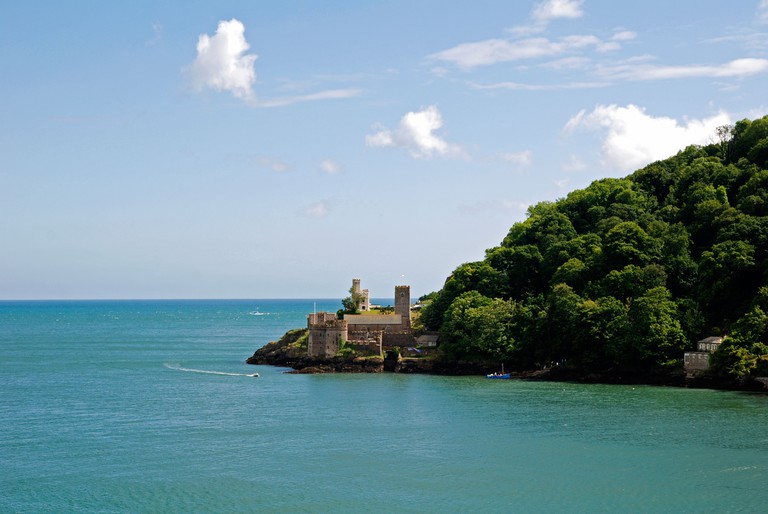 © Kevin Britland / Alamy Stock Photo
The location of Dartmouth Castle on a cliff edge is not only stunning but reveals its purpose: it’s a fortress guarding the entrance of the Dart Estuary and the busy port. It was built in 1388 on the orders of the Mayor of Dartmouth John Hawley, and the gun tower was added a century later, which today is the oldest existing gun tower on the English coast. Make sure you go to the top of the battlement for the superb views of Dartmouth town.

Church, Park
Facebook
Email
Twitter
Pinterest
Copy link
Share
Map View
Although referred to as a castle, Powderham is technically a fortified manor house as it lacks a keep and a moat. It’s still an incredibly grand place to visit, however, affording a fascinating view of architectural history. It’s a blend of Georgian, Victorian and Gothic styles with some of the oldest parts dating back to the 14th century. It has stayed within the Courtney family for 28 generations and is now a well-kept family home to the Earl and Countess of Devon, with a beautiful interior and gardens set within a sumptuous deer park beside the Exe estuary. 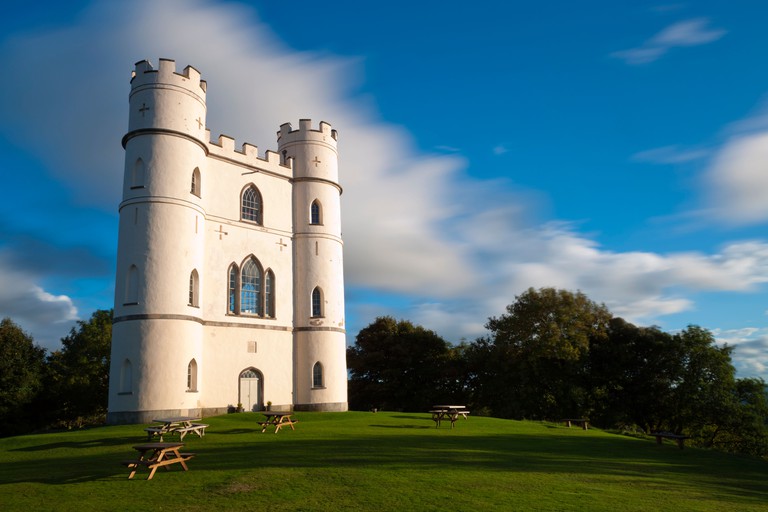 © agefotostock / Alamy Stock Photo
Originally called Lawrence Castle, Haldon Belvedere was built by Sir Robert Palk in 1788 from his East India Company fortunes during the Georgian era. There are lots of original Georgian features, including Gothic windows, a mahogany floor, marble fireplaces and a spiral stone staircase that takes you to accessible roof battlements. Its position 244 metres above sea level on a hill in Haldon Forest means the views are phenomenal.

Historical Landmark
Facebook
Email
Twitter
Pinterest
Copy link
Share
Map View
With a history that dates back nearly a thousand years, Launceston Castle is a striking, stocky ruin that dominates the surrounding area from its position on top of a large mound. It was built by Robert the Count of Mortain sometime after 1068 and was originally earthwork and timber with a large motte in the corner. The unusual keep is a 13th-century round tower built by Richard Earl of Cornwall, and the castle was used primarily as a prison for many years. On the site, there’s a display outlining the castle’s history, as well as items that have been excavated. 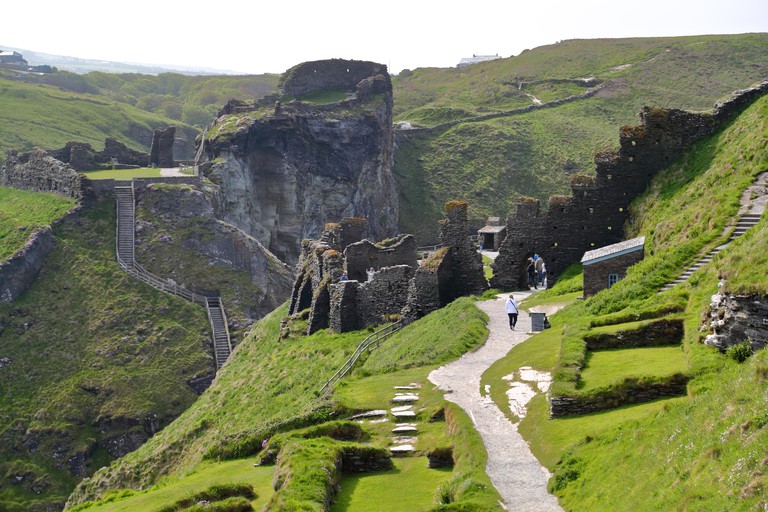 © icona / Alamy Stock Photo
Undoubtedly one of Cornwall’s most well known attractions, Tintagel is a striking Medieval fort on the peninsular of Tintagel Island with a captivating history and mythology linked to the legends of King Arthur. A castle was built in the 13th century by Richard, first Earl of Cornwall but subsequently left to decay and visitors to the ruin in the early twentieth century prompted excavations that revealed a much longer history than previously realised. These included occupation by the Romans and use in Early Medieval times by the regional king of Dumnonia, who governed the collective areas of Devon, Cornwall and Somerset. Today Tintagel attracts numerous visitors due to the King Arthur legends, which began in the 12th century when cleric Geoffrey of Monmouth described Tintagel as King Arthur’s birthplace. 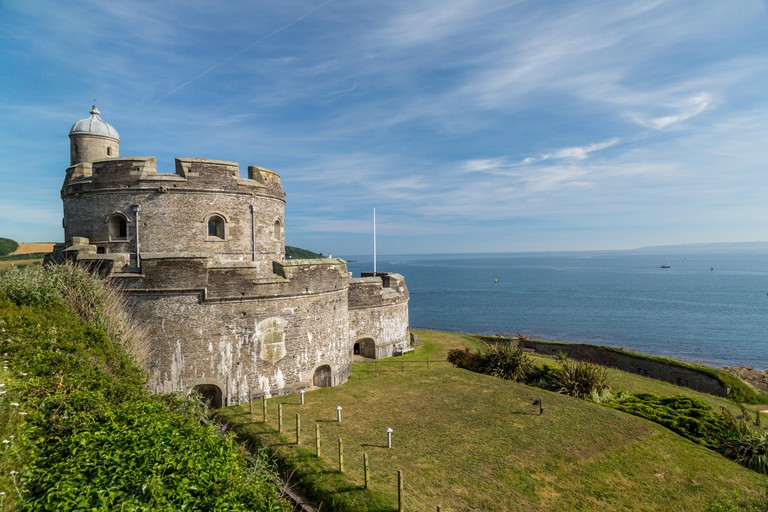 © Rob Carter / Alamy Stock Photo
Another of Henry VIII’s artillery fortresses and the best-preserved, St Mawes has a prominent coastal position on the opposite side of the River Fal estuary to Pendennis Castle, as the two shared the task of keeping the French and Spanish at bay. Built between 1540 and 1542 and based on the shape of a cloverleaf, it was one of Henry VIII’s most richly decorated fortresses: you can still see Latin descriptions carved on the walls praising the king and his son Edward VI, as well as elaborate drawings of gargoyles and sea monsters. It is small but perfectly formed and packed a punch, designed to mount heavy “ship-sinking” guns. The views from the castle keep are wonderful. 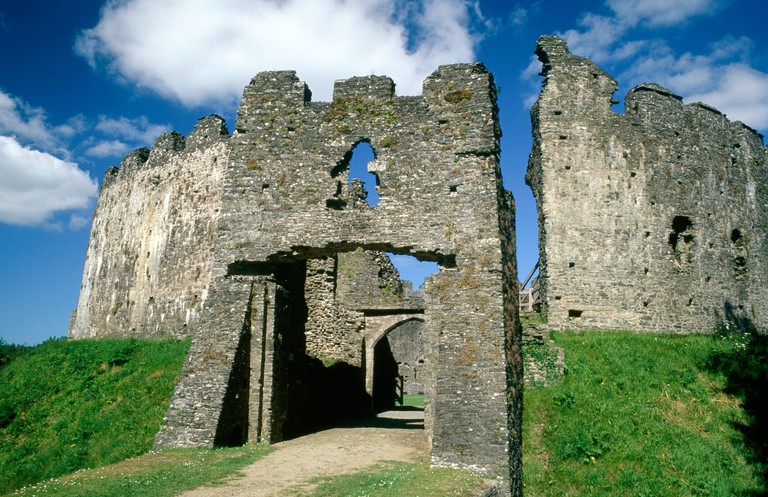 © LatitudeStock / Alamy Stock Photo
One of Cornwall’s four main Norman castles, Restormel is now a ruin but still notable for its perfectly round shape. It stands high on a mound overlooking the River Fowey and is thought to have been built around 1100 after the Norman conquest. The main rooms are intact, and it’s worth climbing the stairs to see the layout from above. The surrounding countryside is gorgeous: it was once a deer park, and though that’s no longer the case, it’s still a beautiful place to relax and have a picnic.
Give us feedback