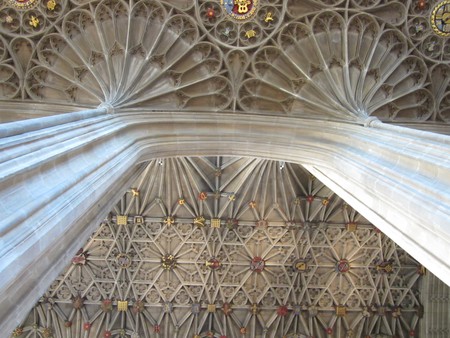 This year, the world-famous Windsor Castle will play host to one of the most talked and written about weddings of the century – the union between our favourite freckle-cheeked soldier, Prince Harry, and his enchanting bride-to-be, the American actress Meghan Markle. Their ceremony will be held at the palace’s stunning 15th-century space of worship: St George’s Chapel.

While the Duke and Duchess of Cambridge (our flawless Will and Kate) provide us with the steadfast traditionalism we expect from the British Royal Family, younger brother Harry has always been a little bit rougher round the edges. While William must give us the upright, carefully ironed perfection we crave from our royals, Harry charms with a cheeky wink, a crumpled shirt and a red-carpet fiancée. The fact he’ll be married at one of the Windsors’ (palatial) family homes is at once down-to-earth and achingly glamorous.

Here are 11 things you didn’t know about St George’s Chapel:

It’s home to an order of knights

The Chapel was originally built as the spiritual home of a group of knights, set up in 1348 by King Edward III who was keen to emulate the legendary Knights of the Round Table. The group, known as the Order of the Garter, still exists 700 years later as the most senior order of chivalry in the United Kingdom. Members were once top fancy aristocrats but are now chosen from every slice of society as recognition for their contribution. The Sovereign (Her Majesty) chooses the men (and now women, too) who will receive a knighthood. John Major and Winston Churchill have both been a part of the order. A special June service for members is held there once a year. 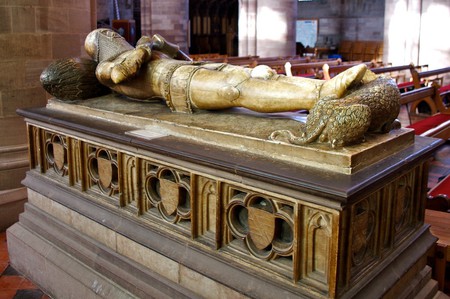 Tomb of Sir Richard Pembridge, one of the earliest Knights of the Garter | © David Merrett/Flickr

Prince Harry was christened there

In 1984, a three-month-old Prince Harry was christened (in the traditional tumbling cream-coloured finery of a royal babe welcomed into the house of God) at the same chapel he will soon be married in. Though Princess Diana is recorded as saying Charles would have preferred a girl, a royal photoshoot after the ceremony suggests the whole family was nothing but joyful as a young Prince William did his best to pull focus in some excellent blue shorts. The fact Harry was christened at the spectacular chapel apparently makes him eligible to marry there, too. 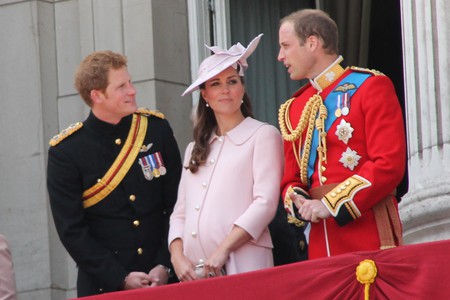 The breathtaking St George’s Chapel is the final resting place of many revered British monarchs. In fact, this annexe of Windsor Castle ranks next to Westminster Abbey as a royal burial spot. Among many of those laid to rest in the chapel are Charles I, Henry VIII and the only one of his wives to bear a son, Jane Seymour. Prince Harry’s beloved great-grandmother, the good old Queen Mum, was laid to rest within its solemnly splendid walls, and the building is also said to be where Queen Elizabeth II herself will one day be buried.

Henry VIII and his family | © Lisby/Flickr

The Queen worships there

While Her Majesty usually attends the Chapel of All Saints on the grounds of Windsor Great Park, she regularly appears at special events in St George’s Chapel, too. Making her regal way there every Easter Sunday, she also attends anniversaries and memorials in its awe-inspiring interior. Prince Charles and the Duke of Edinburgh – who oversees the St George’s House lecture once a year – also frequently offer their prayers there. 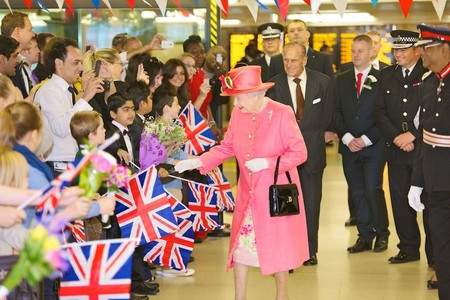 And no, we don’t mean it’s into heavy eyeliner and listens to HIM. St George’s Chapel is frequently described as one of England’s finest examples of perpendicular gothic architecture. The style (also used at St Paul’s Cathedral) incorporates regimented perpendicular lines, a stark contrast to the swirls and flourishes of the previously popular decorative style. Some say this change from flamboyant to fastidious was a reaction to the Black Death, which had demolished a collossal proportion of the country’s population, causing a revulsion to extravagance and a preference for the simple. 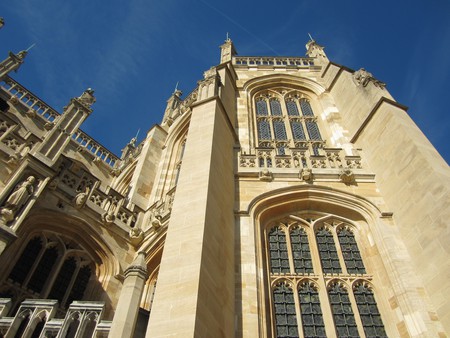 It has its own choir

Of course, no self-respecting church would be complete without the heavenly sound of hymns ringing and echoing from its vast ceilings. Though the Tudor-built Horseshoe Cloister (especially for vicars and choirboys to live in) accommodates 13 choristers, the current membership of St George’s choir is nearer to 20. The choir is exclusively made up of boys who audition and join the group between the ages of seven and nine. They study music theory along with a minimum of two instruments while boarding at St George’s School and perform their divine choral harmonies at services and special occasions throughout the year. 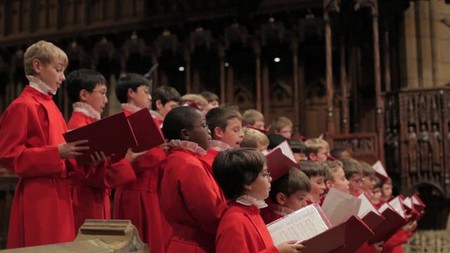 The exterior of St George’s Chapel is adorned with brilliantly peculiar grotesques (not quite the same as gargoyles because they don’t shoot water – fun fact). Some have been lovingly restored and date back to the 15th century. Others were so badly worn the unrecognisable shapes received a revamp with stone carvings by students at the City and Guilds of London Art School.

There’s even a stone version of the devil in a boot – an homage to John Schorn who was believed to have the power to cure malaria as well as banish the devil into a boot. Useful. His bones were placed at St George’s Chapel in the early 15th century. 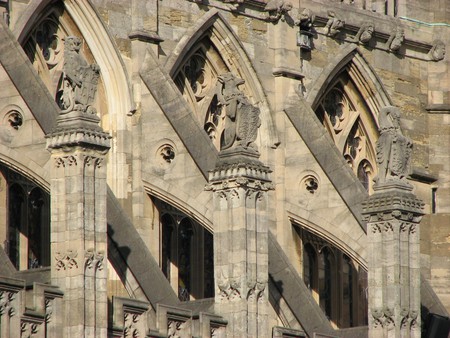 It’s where Charles and Camilla tied the knot (sort of)

A far cry from the imposing grandeur of Westminster Abbey, where Princess Diana and Kate Middleton snatched headlines in snow-white designer gowns, St George’s Chapel at Windsor is a (comparatively) intimate spot to get hitched. The chapel holds a casual 800 well-wishers compared to the 2,000 fascinator-clad guests who can squeeze in at Westminster. It was beneath its jubilant stained glass windows that Prince Charles and Camilla Parker Bowles celebrated a blessing on their nuptials, as did Harry’s uncle the Earl of Wessex and PR high-flyer Sophie Rhys Jones (who twinkled in a much-discussed tiara). Edward VII and Queen Alexandra were also married there in 1863 – one of the earliest recorded ceremonies at the venue. 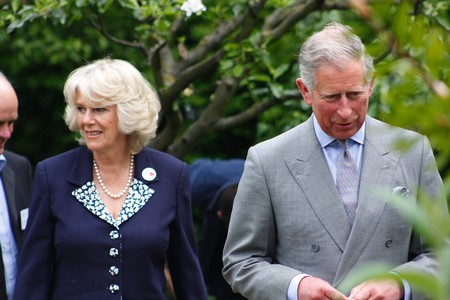 No. We didn’t know what that meant, either. Basically, St George’s Chapel is one of those special churches that lies outside the control of the bishop of the local area and reports directly to the monarch. In this case, our much-loved Queen Liz. The idea dates back to the days when Anglo-Saxon churches had the option of following the country’s king or queen rather than the local religious leader. Most peculiars were abolished throughout the 19th century with Acts of Parliament, but a few royal ones still exist and include Westminster Abbey and the Queen’s chapel at St James’ Palace. 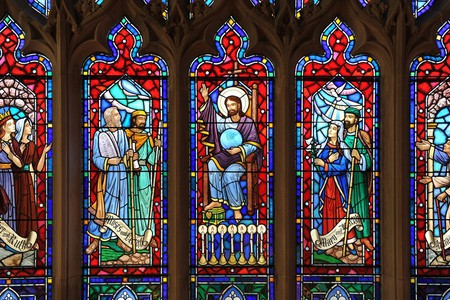 The organ plays a vital role

While of course the choir’s blissful harmonies are essential to the celestial atmosphere in this holy spot, the daunting chords of the chapel’s colossal organ could put the fear of God into the most cynical atheist. One of the earliest organs at St George’s Chapel was built by a family known for the expertise in the area, the Dallams, in the 17th century. Later, in 1789, King George III paid for it to be rebuilt by a man named Samuel Green. Over the centuries, the organ was repaired and improved, and in 1930 it was dramatically sidelined from its original central position to allow the congregation a more impressive view of the chapel’s miraculous vaulted ceiling. Today, it is regularly tuned and maintained by a man named Andrew Scott who works for Durham-based Harrison Organs and used to be a chorister himself. 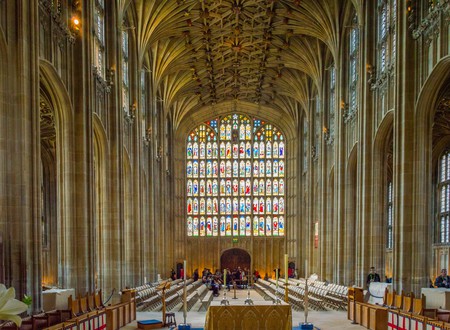 It’s a historical feast for the eyes

Building work on the chapel began in 1475 and took 50 years to finally reach its completion during the reign of Henry VIII. Behind the chapel’s rather stern façade is a truly spectacular glimpse into the annals of history. Edwards III and VI, as well as Henrys VI, VII and VIII all have their arms displayed against the proud stone of its walls. Other memorials include that of Edward the Confessor and Edward the Black Prince, or the comparatively more modern heavenly white tribute to Princess Charlotte. The stained glass windows bring this mesmerising space a truly hallowed feel.