10 Things You Didn’t Know About the University of Oxford 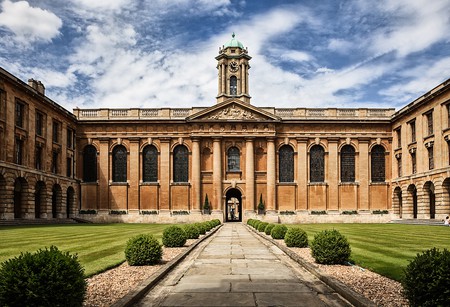 As the oldest university in the English-speaking world, the University of Oxford is famous across the globe. We all know about the stunning college buildings, but what about what lies inside? The University has a very colourful history, as well as being is home to some of the weirdest and most wonderful traditions imaginable. Intrigued? Read on…

It wasn’t always a case of equal opportunities at Oxford University. The first colleges were built in the 13th century, but it wasn’t until 1871 – 600 years later – that women were admitted to the university. Although women were allowed to take exams by 1884, they weren’t awarded degrees until 1920, and it was only in 1974 when finally the last of the all-male colleges opened their doors to women.

We were one of the first women's colleges in Oxford. This photo was taken in 1879- our first students were pioneering women! #lmhoxford #WomenAtOxford #internationalwomensday #iwd2017

38 colleges make up the University of Oxford, and one of the fiercest rivalries exists between Lincoln College and Brasenose College. The story goes that back in the 13th century, during the Town vs. Gown riots, two students were being chased by an angry mob of townsfolk; one from Lincoln College and one from Brasenose. When the students made it to the apparent safety of Lincoln College, they only let their own student inside, leaving the Brasenose man to suffer at the hands of the mob. At lunch time on Ascension Day, an inter-connecting door between the two colleges is opened for five minutes, and Lincoln students serve Brasenose students pints of beer, to apologise for what happened hundreds of years ago.

Every student, on joining the University, has to swear an oath stating they will not light a fire inside the world famous Bodleian Library: ‘not to bring into the Library, or kindle therein, any fire or flame’. It’s a tradition that has been in place for centuries and continues to be upheld today.

Finally found a library worth the while 📚

What time is it?

If you come to Oxford, you need to embrace Oxford Time! Before railways became widespread in England, most towns and cities had their own time zone. Oxford operated five minutes later than Greenwich Mean Time. To honour this quirk, many lectures at the University start five minutes past the hour; perfect for students desperate for that extra five minutes in bed.

There are various dress codes for different occasions at Oxford University, for example Sub fusc is made up of the long black gowns and crisp pressed white shirts that look more than a little bit like Snape from Harry Potter. But it’s not just clothes that matter; during exams, students at Oxford wear a white carnation in their lapel on the first day, then pink, then red on the final day of exams.

Oxford locals and students have a notoriously rocky history. In the 13th century, as a result of one particularly violent clash, where students murdered a local woman, the students fled Oxford for Cambridge, and subsequently founded the University of Cambridge. It’s fair to say Cambridge students don’t dwell on this fact too much…!

The Bullingdon Club is one of Oxford University’s most notorious. Formed over 200 years ago, its members are among the wealthiest, most aristocratic and privileged male students attending the University. The club, whose members greet each other with chants of ‘Buller, buller, buller!’, is famous for its rowdy behaviour, with rumours of obnoxious initiation ceremonies involving burning a £50 note in front of a homeless person, and tales of trashing pubs and restaurants, racking up tens of thousands of pounds worth of damages in the process.

Well, it wouldn’t be a university round-up without a drinking game, would it? Invented at Oxford by dons and students during the 14th century, ‘pennying’ is one of the weirdest. As with every good drinking game, there are a lot of strange rules you need to follow, but the general ideas is that you try to slip a penny into someone’s drink without them noticing. If you succeed, the person who has been ‘pennied’ has to down their drink in one.

There are many weird and wonderful traditions at Oxford University, but perhaps one of the strangest is the Time Ceremony, held by Merton College students. Here, in the early hours of the last Sunday in October, the students walk backwards around the Fellows’ Quad drinking port. The purpose behind it is to maintain the space-time continuum during the change from British Summer Time to Greenwich Meantime. Although it could just be a good excuse to drink port!

Oxford students have a very unique way to mark the end of exams. Once a student has finished their final exam, there is a tradition of ‘trashing’, where friends cover them in glitter, champagne, or foam as they leave the exam hall. It’s a very messy way to celebrate their end at Oxford University.