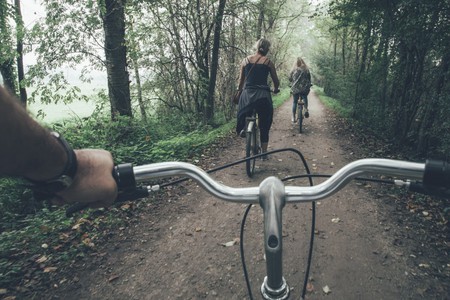 Manchester’s city cycle lanes are currently being transformed into a Dutch system that will make cycling into the city both more enjoyable and much safer. But if you’re cycling for pleasure, rather than for your commute, there are much more scenic cycle routes in and around the city than Oxford Road. Here are our top 10 scenic cycling routes in the Greater Manchester area – don’t forget your helmet!

Although this route passes directly beneath motorways and tram lines, the scenic cycle along the River Mersey and through the woods transports you to the countryside. Cycling along the river with views of the golf course on the opposite bank, don’t be surprised if you spot a heron resting by the water. When you reach Chorlton Water Park, there’s the option for a short detour around the lake before continuing along the river and taking a turn-off to cycle through the woods towards Chorlton Green.

Offering an off-road option for travelling between Manchester’s suburbs, the loop that takes you from Chorlton to Debdale feels worlds away from the busy roads that run close by. A convenient and quick way to cycle between Chorlton and Fallowfield, keen cyclists will continue on the route all the way to Debdale Park where they can enjoy a ride around Gorton’s reservoirs.

Located to the east of Stalybridge, on the edge of the Peak District, this sprawling country park offers plenty of opportunities for both cycling and walking. There’s a variety of routes to take, some more challenging that others, but the waterside paths past Walkerwood, Brushes and Swineshaw reservoirs offers particularly lovely views. Both the Pennine Bridleway and the Tame Valley Way pass through the park with the opportunities to extend your ride along either.

Leaving Greater Manchester and heading into West Yorkshire, National Cycle route 66 starts from Rochdale train station along the canal to Smithy Bridge. Passing by the beautiful Hollingworth Lake, you have the opportunity to take a detour and cycle the circumference of the picturesque body of water, or you can continue through Littleborough and Walsden along the canal into Todmorden. Reward yourself with a pint of a local ale at The Golden Lion before getting the train back into the city.

Situated just outside Bury, this beautiful country park includes both woodland trails and waterside paths for cycling. If you’re an art lover, you can tie in a visit to Prestwich Forest Park with a cycle along the Irwell Sculpture Trail, seeking out the most interesting works of art along the way. If you prefer an easy route, stick to the path that follows the River Irwell and take a picnic to enjoy on the banks.

If you fancy a longer route, attempt to cycle the length of Britain’s longest canal (or alternatively choose a more manageable section). The entire canal runs for 126 miles, passing by a variety of villages and towns, plenty of locks and an abundance of beautiful countryside along the way. Nature lovers should explore Martin Mere Nature Reserve along the way. Check the route before you set off, as sections of the canal are closed to cyclists but there are detours in place.

Located in the Medlock Valley, this expansive park is a haven for nature lovers with plenty of birds and wildlife to look out for. Keen mountain bikers will relish the trails at Clayton Vale while leisure cyclists will enjoy the slow ride along Medlock Valley Way. Take a break before leaving the park for a chance to grab refreshments at the café.

This easy six-mile cycle is a great option for families looking to get out of the city to enjoy their bikes. The route takes you along two former railway lines, taking in several sights including old mills and railway viaducts along the way. There’s also the opportunity to stop off at Saddleworth Museum and Art Gallery to take in a little culture, and several pubs not too far off the route to enjoy a refreshing drink.

Another scenic waterside cycle route takes you along the Ashton Canal, starting in Ancoats in the city centre before leading out on a six mile stretch towards Ashton. Following the tow path, the route shows off an impressive 18 locks along the way and offers several opportunities for extending your cycle, including joining the Huddersfield Narrow Canal. Upon reaching Ashton, we strongly recommend checking out Lily’s Indian Restaurant for one of the best (and cheapest!) authentic Indian meals in the city.

This pleasant and easy cycle begins through Monton Green, taking in the sights of rural Salford. The track splits at Roe Green, with most people turning left to take the slight incline up to the road. Following a short section on the road, go through the green gates and take the path to your right to return to the loop, following the track all the way downhill back to where you began.

Nice day for a walk ☀