Pop Art is synonymous with American artists like Andy Warhol and Roy Lichtenstein. Their use of imagery from advertising, comics, and brand logos created a new, populist style that blurred the divide between high and low art. But Pop Art first emerged in Britain and some of its finest practitioners were Europeans. In honour of the new ‘The World Goes Pop’ exhibition at Tate Modern, here are ten of the best non-American Pop Artists. 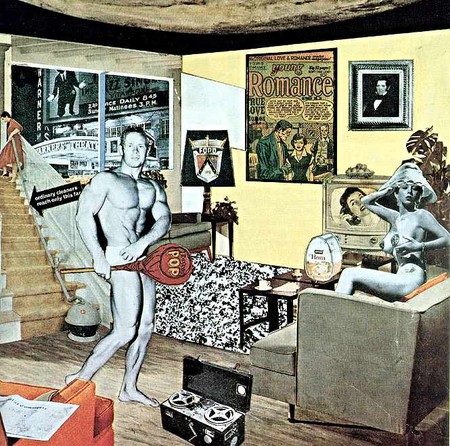 Richard Hamilton was the Englishman behind the first Pop Art image to become really noted by the public. His 1956 collage Just What Is It That Makes Today’s Homes So Different, So Appealing? is made up of symbols and images of the consumerism and Americanism sweeping Europe in the post-war era: a tin of ham, a bodybuilder, TV, vacuum cleaner, movie theatre. Hamilton was a member of the Independent Group that became the key platform for Pop Art, and taught at the London Central School of Arts and Crafts and Newcastle University where his students included Bryan Ferry. He was also the principal theorist behind Pop Art, defining it as ‘popular, transient, expendable, low-cost, mass-produced, young, witty, sexy, gimmicky, glamorous and Big Business.’ He believed there was no hierarchy within art, that Picasso was as worthy as Elvis, television as important as abstract impressionism. 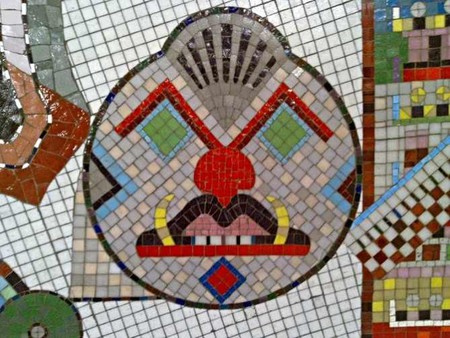 The Scottish Eduardo Paolozzi was the son of Italian immigrants; he ended his life a Royal Academician and knight of the realm. In the late 1940s Paolozzi was among the earliest artists to create what we know as Pop Art. In Paris to meet sculptors like Brancusi and Giacometti, Paolozzi spent his free time creating collages using images from American magazines – his 1947 work I Was A Rich Man’s Plaything is regarded as the first work of Pop Art. He formed the Independent Group at the Institute of Contemporary Arts in London in 1952 that became central to propagating Pop, and in the ‘60s used screen painting techniques to create Pop Art masterpieces including the As Is When series inspired by Wittgenstein and made up of abstract patterns, fragments of text and Disney characters. He’s also the man behind the mosaics at Tottenham Court Road Station. 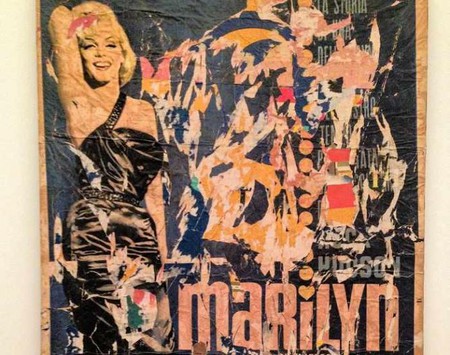 Domenico Rotella originally spent his time in post-war Rome working on abstract paintings and with experimental phonetic poetry. After time in the USA on a Fulbright award he returned to Rome and swiftly came to the conclusion there was nothing left to be done using paint. He turned to décollage, using movie posters and advertising taken from the walls of Rome and tearing pieces away to create images. His favorite images were American movie stars like Marilyn Monroe, Cary Grant, John Wayne, and Ava Gardner. Rotella was associated with the Nouveau Réalistes group working primarily in northern Italy and the French Riviera that included the likes of Yves Klein and Niki de Saint-Phalle and is considered the Continental counterpart to Pop Art. 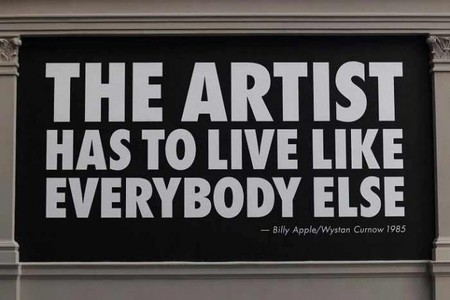 Billy Apple left New Zealand for London in 1959 as Barrie Bates. He trained at the Royal College of Art with the likes of David Hockney and Derek Boshier and in 1962 became Billy Apple, complete with bleached hair and eyebrows. His first solo show came in London in 1963, entitled Apple Sees Red: Live Stills, using his own self-portraits presented in the manner of advertising, the ultimate commodification of the artist and the breakdown of the division between art and life that was central to Pop Art. Moving to New York Apple’s work was included along with that of Warhol, Lichtenstein and Jasper Johns at the seminal ‘The American Supermarket’ exhibition at the Bianchini Gallery in 1964. Later Apple worked as an art director for leading ad agencies, pioneered the use of neon lighting in sculpture and continued to use the methods of advertising to transmit his message. 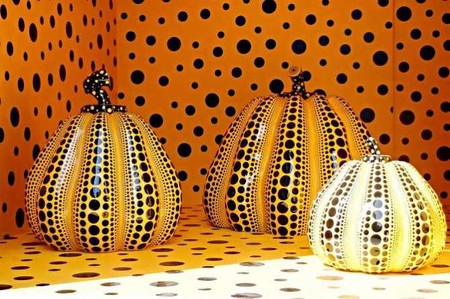 The Japanese artist Yayoi Kusama has been working for over 60 years. Whilst it’s impossible to label her simply as a Pop Artist, she had a major impact on the likes of Warhol and Oldenburg and on the Pop Art aesthetic. Her work is also considered a precursor of feminist art, psychedelia, and minimalism. Kusama was in New York from 1957, working in paint, sculpture, film, fashion, outdoor installations, and performance art. She used her trademark polka dot motif to cover whole rooms, naked people, and sculptures, held naked happenings and orgies, and once write to Richard Nixon offering him a night of passion in return for an end to the Vietnam War. Her bursting, vibrant colours are a clear influence on Pop Art, and by museum attendances Kusama was the most popular artist in the world in 2014. 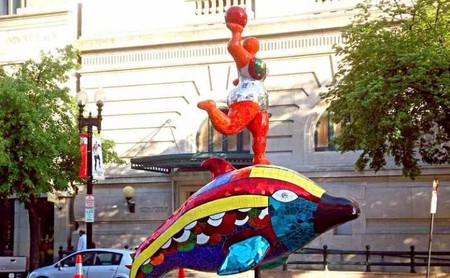 There’s been a lot of revisionism in recent years on the place of women in Pop Art. The 2010 Brooklyn Museum exhibition ‘Seductive Subversion: Women Pop Artists 1958-1968’ was the first to focus solely on the works of female Pop Artists, previously overlooked or regarded as of only secondary importance. French-born and raised in America, Niki de Saint Phalle was one of the most important of all women Pop Artists. She started out producing shooting paintings – bags of paint shot to allow the colours to drip onto the canvas. More famous are her ‘nana’ sculptures, made from papier-mâché. Nana is French slang for woman, and the huge, curvaceous sculptures, painted in bright, garish colours are a counterpoint to the way women are portrayed in advertising. Amongst her most famous works is the Giardino dei Tarocchi sculpture garden in Tuscany. 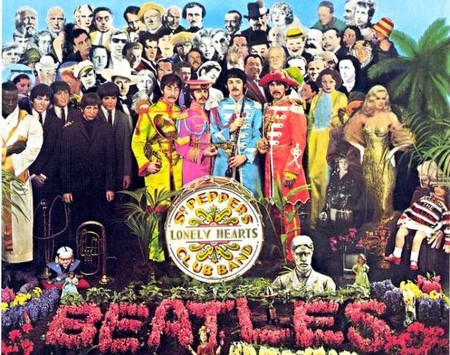 Knighted in 1932 for services to art, Peter Blake emerged in the late 1950s at the Institute of Contemporary Arts and was one of the young artists featured on the BBC documentary Pop Goes the Easel made by director Ken Russell in 1962. Blake became one of the key artists of Swinging London in the 1960s. He told The Guardian in 2006 that he had ‘wanted to make an art that was the visual equivalent of pop music’ – accessible, cool, and fun. Blake has worked in collage, paint, printmaking, engraving and sculpture. His most famous images include his 1961 Self-Portrait with Badges, in which he portrays himself in denim jeans and jacket and a pair of Converse trainers, standing with an Elvis album; and the cover for The Beatles’ album Sgt Pepper’s Lonely Hearts Club Band, a collage of figures like Mae West, Dylan Thomas and Karl Marx. 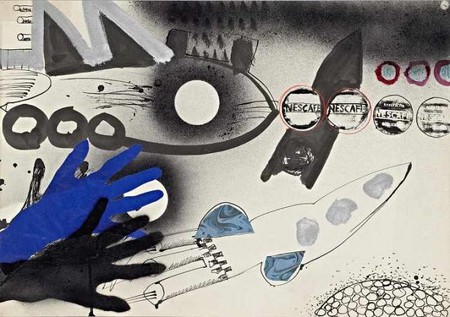 Kiki Kogelnik was perhaps Austria’s most important Pop Artist, even if her connection to the conventional Pop Art aesthetic isn’t simple. She worked in New York, knew Warhol and Rauschenberg, attended The Factory, but commented of her own work that ‘I’m not involved with Coca-Cola. I’m involved with the technical beauty of rockets, people flying in space and people becoming robots.’ Eschewing the imagery of commerce for her own vision of the space-race, Kogelnik borrowed the brash colours and techniques of Pop Art for a more personal approach. Her work in the 1960s celebrate the age of space travel and the moon landings, and her later works play with the depiction of women in the advertising that formed so important a role in the work of the likes of Warhol. 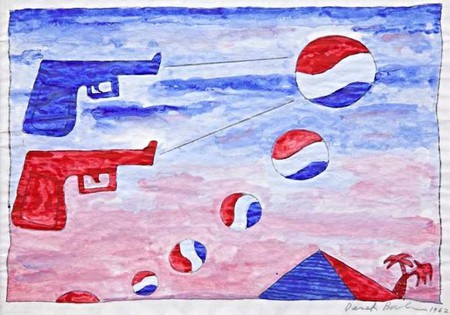 Derek Boshier started out in the early 1960s at the Royal College of Art and was another British artist to feature on the BBC documentary Pop Goes the Easel. Highly engaged with contemporary society and politics, Boshier’s work has included painting, sculpture, neon, photography, collage and record and songbook covers for David Bowie and The Clash. He now works from Los Angeles and you’ll find Boshier works in major galleries like Tate Modern, the British Museum and the V&A. His main Pop Art period was the 1960s when he produced works like Situation in Cuba, a merging of the Cuban and American flags and The Identi-Kit Man of 1962 featuring images of one of Boshier’s recurrent motifs – toothpaste, the very first product ever advertised on British TV.

Gerald Laing started out in the army, going through officer training at Sandhurst before turning to art. He spent time in New York in the 1960s and had links with Warhol, Lichtenstein and Robert Indiana. His works took inspiration from commercial imagery and newspapers, with their dotted ink effect mimicked by Laing with paint. His paintings of bikini-clad women, Americana icons like hot-rods, drag-racers and skydivers, and of celebrities are some of the most recognisable of the Pop Art era. Famously his image of Brigitte Bardot, sold by the artist in 1963 for £40, fetched £902,500 in a sale at Christie’s in 2014, and his work Lincoln Convertible, kept in storage for over 30 years, is the only known contemporary painting of the assassination of President Kennedy in 1963.