10 Artworks By William Hogarth You Should Know 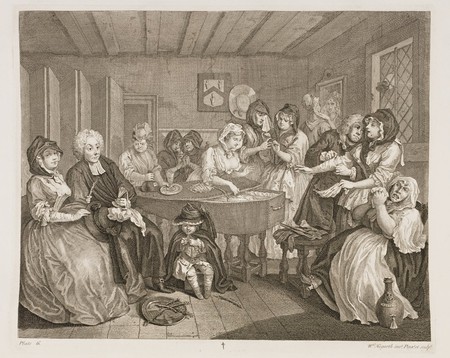 Hailed as the ‘grandfather of satire,’ English artist, engraver and satirist William Hogarth created a body of scathing commentary through his work, critiquing aspects of 18th century English society like corrupt politics, religion, and even the evils of gin-drinking. We explore ten of Hogarth’s major works, from his Marriage A-la-Mode to his self-portrait, The Painter and his Pug.

A pair of prints created by Hogarth in 1751, Beer Street and Gin Lane were published in support of the Gin Act, a Parliamentary measure that sought to curb the consumption of spirits by raising the then very cheap costs of selling and buying gin. In an apparent attempt to encourage viewers to choose ale over more intoxicating spirits, Beer Street depicts happy, healthy Londoners relaxing with a few brews after a hard day’s work, and by contrast, Gin Lane shows its citizens consumed by the evils of overindulgence – in the foreground, a gin-addled mother lets her child fall to its death, while an emaciated and inebriated ballad-seller ironically peddles pamphlets entitled ‘The Downfall of Mrs. Gin.’ 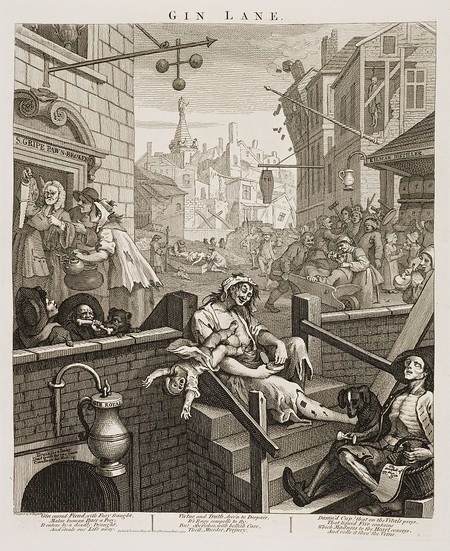 The first of Hogarth’s ‘modern moral subjects,’ A Harlot’s Progress is a series of six paintings and engravings created in the early 1730s, during which a crackdown – mostly spearheaded by a zealous judge named Justice John Gonson – on prostitution was rolled out. The series tells the cautionary tale of Moll Hackabout (possibly named after both Daniel Defoe’s heroine Moll Flanders and then-notorious real-life prostitute Kate Hackabout), a fresh-faced young woman who arrives in London and gradually falls from grace, becoming a kept woman and then a prostitute before being jailed for her crimes and eventually dying from syphilis.

It wasn’t only the lower echelons of society that Hogarth moralized and critiqued through his work – in Marriage A-la-Mode, the artist turns his eye to the upper classes in a series of paintings depicting the downfalls of marriages arranged for financial and social benefit rather than for love. In the first painting, the aptly named Earl of Squander and a wealthy merchant arrange for the marriage of their children, who appear indifferent in the background. Later paintings show their marriage quickly dissolving, with the husband visiting prostitutes and the wife having an affair, culminating in his murder and her suicide. 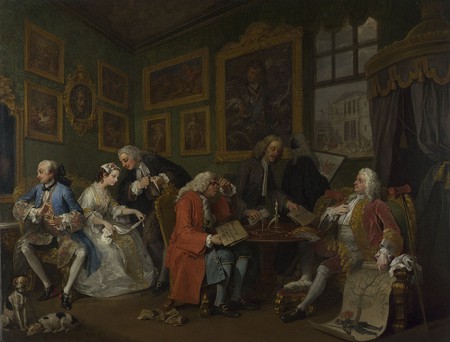 The Painter and his Pug

A revealing painting within a painting, Hogarth’s 1745 self-portrait The Painter and his Pug was started in the 1730s and features the artist in informal garb, though X-rays have since shown that he originally painted himself in formalwear. In the foreground of the work, a palette bears the ‘line of beauty and grace‘ – a term coined by Hogarth referring to an aesthetically pleasing serpentine line outlined in his 1753 book The Analysis of Beauty – while books by Shakespeare, Jonathan Swift and John Milton point towards the artist’s inspirations. The dog, Hogarth’s pet pug Trump, is thought to have been included as a representation of the artist’s pugnacious character. 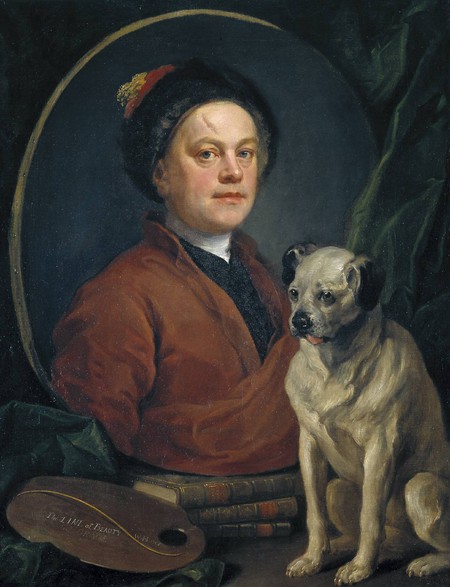 Four Times of the Day

Hogarth’s Four Times of the Day is a series of four paintings – titled Morning, Noon, Night and Evening – which take a humorous look at urban life in early 18th century London. The second painting of the series, Noon, depicts the culture clash between the capital’s upper and lower echelons of society — on the right hand side of the work, the elegant French Huguenots exit a church outfitted in high fashion, and across the street, a group of English folk cavort outside a pie shop. While Hogarth portrays his French subjects in a more gainly manner, it is still suggested that his sympathies lay more with his fellow countrymen in their depiction as happy, healthy and rosy-cheeked – if a tad unkempt and lewd. 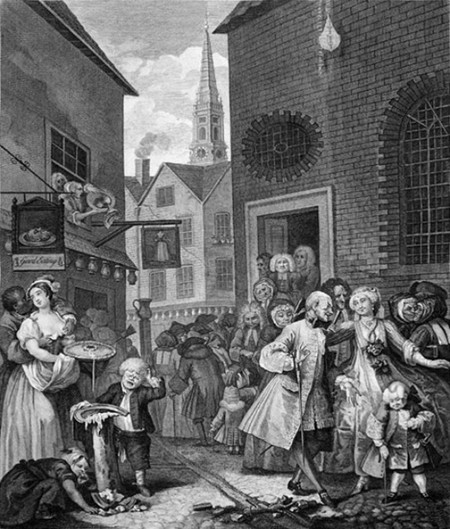 Today part of the Sir John Soane’s Museum collection in London, An Election (also known as Humours of an Election) is a series of four oil paintings created by Hogarth in the mid-1750s against a backdrop of political corruption in pre-Great Reform Act Britain. The second scene, The Polling, shows the election in full swing, with both Tories and Whigs resorting to unethical tactics to increase their chances of winning, as demonstrated by Tories dragging both a disabled man and a dying man to the polling station in an effort to gain more votes. In the background, a broken-down golden carriage represents Britannia and the corrupt state of the country’s politics. 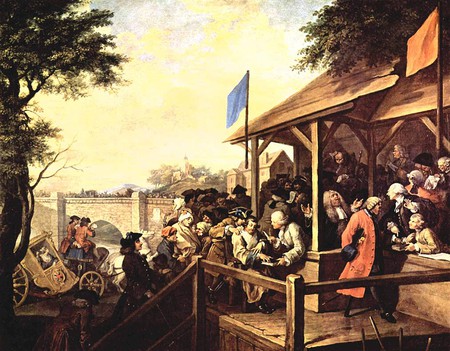 The Four Stages of Cruelty

In Hogarth’s 1751 engravings, The Four Stages of Cruelty, the artist depicts the various stages of the life of his fictional protagonist Tom Nero and his descent into vicious cruelty. First depicting Nero as young lad inflicting harm upon a dog, the series culminates in the murder of Nero’s lover by his own hand – as seen in the third stage, Cruelty in Perfection – and his subsequent execution. In his portrayal of Nero’s moral deterioration, Hogarth suggests his increasingly worse crimes were something of a natural progression, the overall moral lesson behind the series being that cruel behavior left unchecked by society will result in gradually more violent acts. 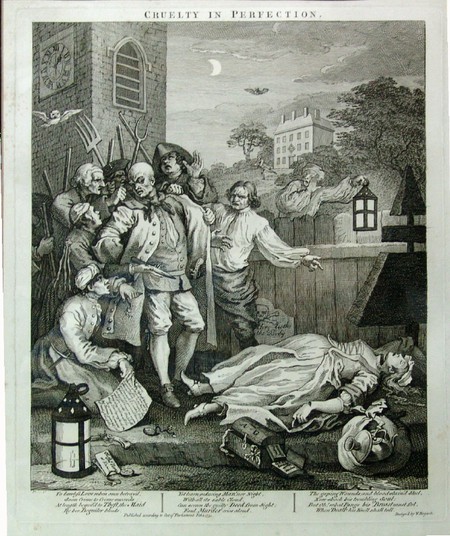 A group portrait of the four young children of Daniel Graham, apothecary to the Royal Household, The Graham Children at first appears a scene full of gaiety and innocence, but several elements in the painting hint towards a much more sombre tone and reality. At the time of painting, the youngest of the Graham children (Thomas, on the far left) had died, and Hogarth includes many references to his mortality in the work, from the predatory cat stalking a caged bird in the foreground to the figure of Cupid standing beside an hourglass and carrying a scythe, which are both symbols of death. 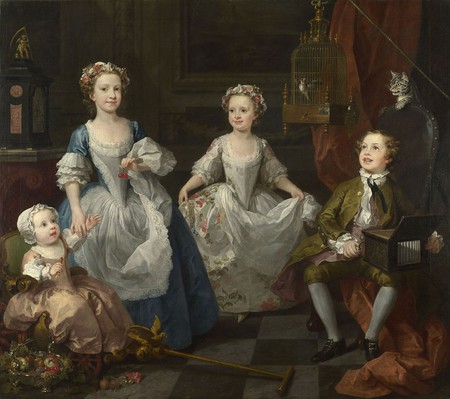 A noticeable departure from the majority of Hogarth’s oeuvre, in The Shrimp Girl, the artist experiments with a genre popular in 18th century Europe — specifically, portraits of hawkers and street-sellers, like a young woman selling shellfish on the streets of London – in a style that has been compared to the Rococo oriented works of French painter Jean-Honoré Fragonard and English artist Thomas Gainsborough. Technically an unfinished work, The Shrimp Girl remained in Hogarth’s own private collection until his death. Hogarth’s widow Jane is said to have remarked to guests visiting her home, ‘They say he could not paint flesh. There is flesh and blood for you,’ when showing them the work. 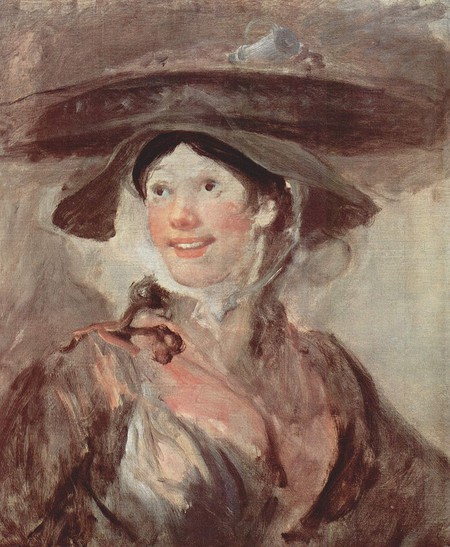 O the Roast Beef of Old England (‘The Gate of Calais’)

Inspired by an incident in France, during which Hogarth was arrested whilst sketching Calais’ old city gate under suspicion of being a spy, O the Roast Beef of Old England (‘The Gate of Calais’) features some not so subtle hints as to the artist’s opinion of the French. Borrowing its name from a patriotic song at the time which hailed roast beef as a symbol of Britain’s powerful status, the titular beef joint takes centre stage in the painting, while around it, French soldiers are forced to consume watery soup. An emaciated Scottish man, who was exiled following the Jacobite rebellions, sits next to a paltry meal of raw onion and bread, while Hogarth himself is included in the left of the scene innocently sketching away. 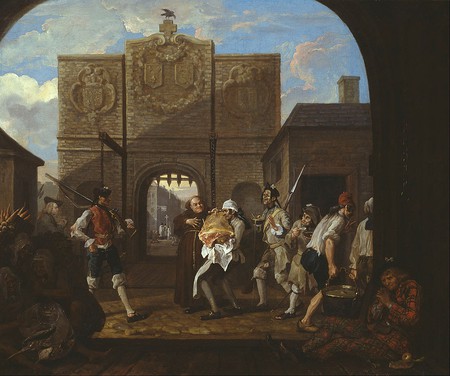