10 Artworks By Millais You Should Know

One of the founders of the Pre-Raphaelite Brotherhood – a group of artists who wanted to create art like those before Raphael – English painter John Everett Millais was a true master. Creating highly detailed works, Millais painted a variety of scenes from biblical stories to portraits, and while many paintings often capture a moment, his art tells an entire story, enhanced by the use of symbolism. Here, we profile our favourite works by Millais.

Painted when Millais was only 19 years old, Isabella is a truly beautiful piece of art and was the first painting with the Pre-Raphaelite Brotherhood insignia on it (PRB), laying the groundwork for what the PRB was all about. The painting is derived from Keats’ ‘Isabella of the Pot of Basil’, a story taken from the 14th-century Italian writer Boccaccio’s Decameron – a tragic love story. Short version: Isabella was in love with Lorenzo (seated next to her) who was of a lower class than she; they became lovers, which her brothers did not approve of, so they killed Lorenzo. Medieval subject matter such as this was appealing to Millais due to the fact that the PRB wanted to create art that harkened back to medieval times – art with stunning detail and vibrant colours. Isabella can be seen at Walker Art Gallery in Liverpool. 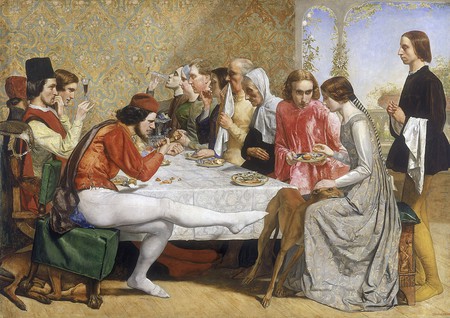 Exhibited at the Royal Academy in 1850, Christ in the House of His Parents was a controversial painting during its time, as it depicted the Holy Family as a regular, everyday family. With a setting in a carpenter’s shop, the figures in the painting could have easily been any family during that specific time, and the public did not like this one bit. However, if one looks closely at the painting, they will find it awashed with symbolism; for example, on the back wall above Christ’s head (the little boy with red hair) is a triangle, signifying the Holy Trinity, and next to that, on the ladder, is a perched dove (Holy Spirit). Today, you can find the work at Tate Britain in London. 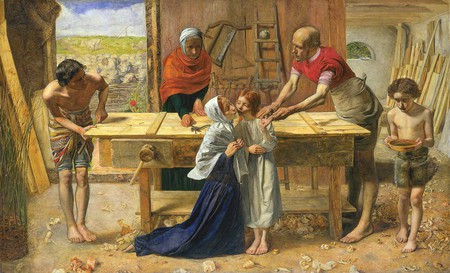 John Everett Millais, Christ in the House of His Parents, 1849-1850 | © Tate Britain/WikiCommons

Another painting that can be found at the Tate Britain, Mariana is based on a character from Shakespeare’s Measure for Measure. Exhibited for the first time in 1851 at the Royal Academy, the painting was displayed with a few lines from Tennyson’s Mariana, including the line, ‘She only said, ‘My life is dreary,/He cometh not,’ she said […]’. In love with a man named Angelo who rejects her, Mariana is alone and sad; she sits in her room as time passes by, evident with the leaves on the ground. Before her is a stained-glass window depicting the Annunciation, which serves as a juxtaposition to Mariana’s complete sadness of wanting to be with a man who no longer wants to be with her. 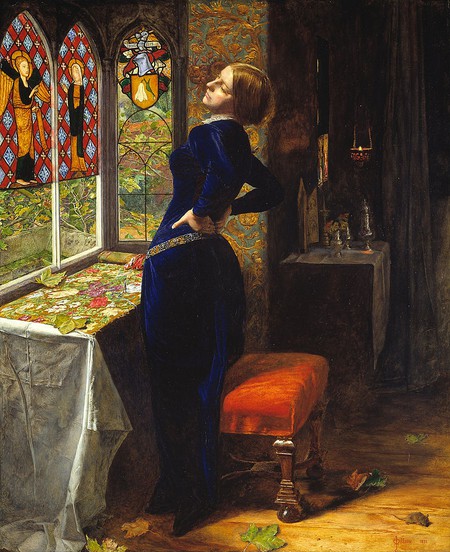 Probably one of Millais’ most recognised works, Ophelia is yet another character from a Shakespearean work, this time Hamlet – the Pre-Raphaelites were very fond of Shakespeare’s oeuvre. The lush, verdant landscape peppered with white blossoms, which Millais painted first, is lovely; however, it takes a turn with Ophelia’s dead body floating on the stream – it truly is beautifully haunting. Popular PRB model Elizabeth Siddal modeled as the tragic Ophelia who is strewn with various flowers, most of which have important meanings. For instance, there are poppies, which symbolise death, along with the appropriately named forget-me-nots, amongst others. As with the previous two works, this is also on display at Tate Britain. 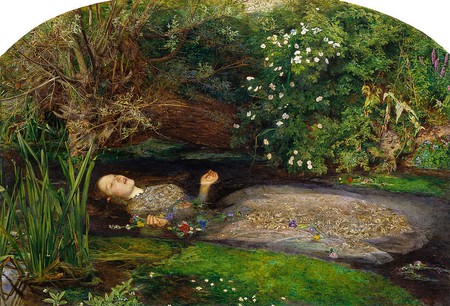 French Protestants, especially those with their origins in the 16th and 17th centuries, are known as Huguenots. In 1572 on the day known as St Bartholomew’s Day massacre, thousands of Huguenots were killed and all because of their beliefs. In A Huguenot, Millais portrays an embracing couple, with the young Catholic woman pleading with the love of her life (a Huguenot) to tie a white band around his arm, which would make people believe he was Catholic, thus, being spared from certain death. Brimming with emotion, it is clear to see that the woman is terribly worried; however, the young man, while looking at her lovingly, is gently pulling the white armband away from his arm.

Shown to the public for the first time in 1853, Order of the Release was so popular with spectators that the Royal Academy had to bring in a police office to keep the crowds moving along. The painting depicts a Jacobite Highlander rebel being released from prison and reuniting with his young child and wife – modeled by Millais’ future wife Effie Ruskin – who has the order of release in hand. As with his and all PRB artworks, the details are incredible, adding to the storytelling of the piece. However, what sets this painting apart from the others on this list thus far is the background. Where Millais’ backgrounds are usually full of intricate details, this one is dark, allowing the figures to stand out and be the focal point. See this one in person at Tate Britain. 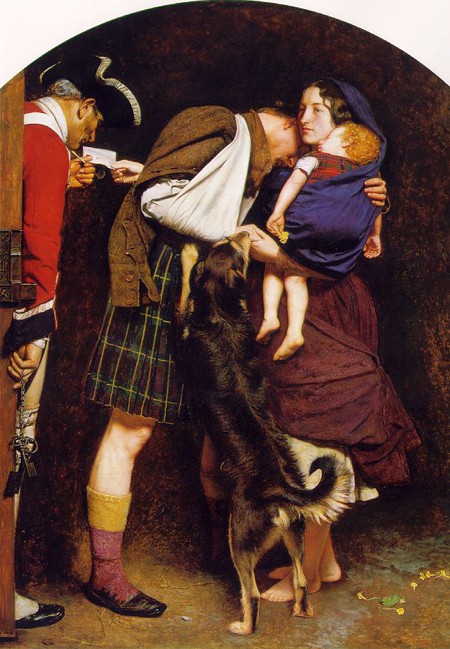 Exhibited in 1856, Autumn Leaves depicts four young girls placing colorful leaves from baskets into a pile on the ground. Not a particularly fun task, none of the girls look too happy about this job, all featuring sombre looks on their faces. Two girls on the right, the youngest of which is holding partially eaten apple, are looking off to the side of the frame, while the other two are looking straight out at the spectator. While it may look like a landscape painting, symbolism is ever-present in the piece and is an intriguing look at the circle of life – from the young girls to the dead and decaying leaves. Autumn Leaves can be seen at the Manchester Art Gallery. 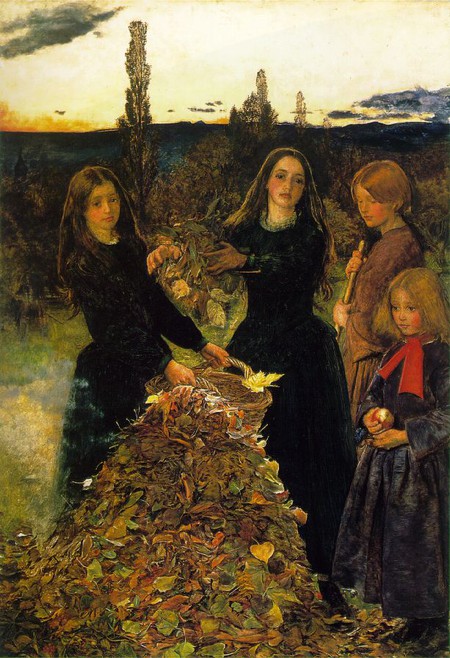 This painting is considered by many to be one of Millais’ best and greatest portraits. Located at the National Portrait Gallery in London, Louise Jopling was painted for the sitter’s husband, Joe Jopling – both Joe and Louise were friends of Millais. A three-quarter-length portrait placed against a neutral background, Mrs. Jopling is wearing a beautiful black dress embroidered with colourful flowers; she is turned to the side while she stares at the viewer, and her hands, which are holding a fan, are behind her back. She is standing tall and proud – a strong, confident woman.

Another very popular work, Bubbles, which used to be titled A Child’s World, is a charming painting – but, of course, with a deeper meaning – of a young boy being a child and playing with soap suds, creating delicate bubbles. The little boy in the painting is actually Millais’ grandson who was four years old at the time. While on the surface it is, indeed, an adorable picture of the little boy, with a mop of curly red hair, blowing bubbles and having fun, the meaning is much more significant – death. A bubble only lasts a very short amount of time before bursting, reminding viewers the life, too, is fleeting. It is on a long-term loan to Lady Lever Art Gallery near Liverpool. 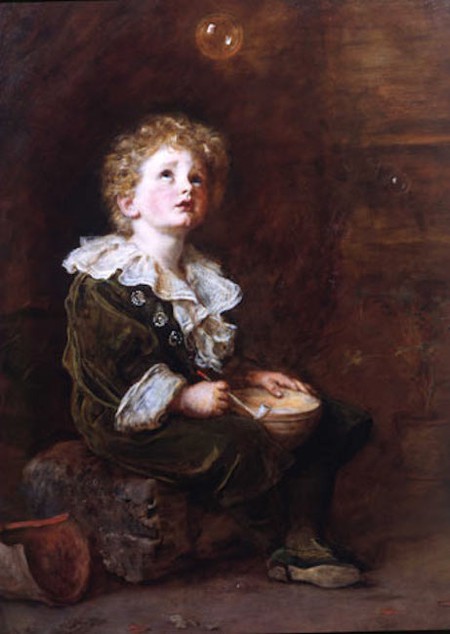 Later on in life, Millais turned more towards landscape painting, creating breathtakingly beautiful artworks depicting the Scottish scenery. One such painting is Dew-Drenched Furze of 1889-1890, which is a picturesque view of the woods in Perthshire. While this dense landscape of muted greens and golden, soft yellows, devoid of any figures, is very detailed, there is an almost fogginess to it, giving it a slight abstract feel – breaking away from his usual clear, crisp artworks. 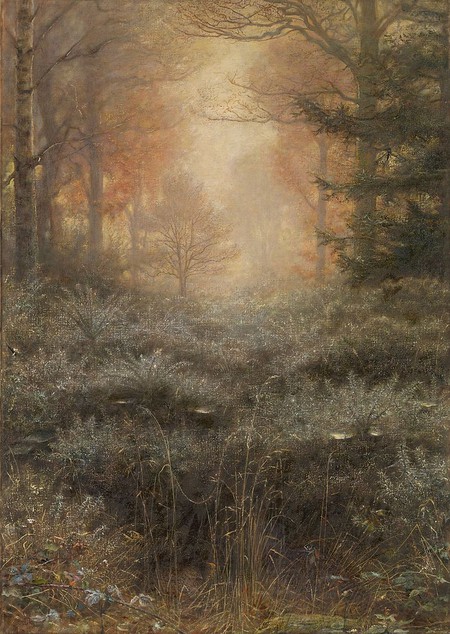