10 Artworks by John Constable You Need to Know 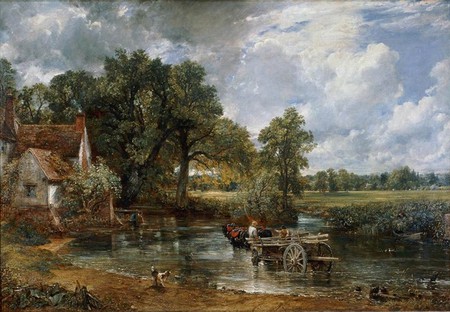 Today, John Constable (1776-1837) is remembered as among England’s greatest painters. But in his lifetime, he had little success in his home country. A revolutionary painter, he disregarded the hierarchy of genres that relegated landscapes beneath genre and historical painting and aimed at a truthful rather than idealized vision of nature. It was only in France that his work found popularity amongst fellow radicals like Delacroix and the later painters of the Barbizon School. Here are ten of his greatest works.

One of Constable’s first major works, Dedham Vale was painted when he was 26. Four years earlier, he had entered the Royal Academy Schools after convincing his father to let him pursue his artistic career. Even at this early stage of his career the Constable aesthetic is in evidence: close observation of nature, especially of the sky, the style that the French author Stendhal would later call ‘the mirror of nature.’ Constable was born and grew up in East Bergholt in Suffolk in the Dedham Vale part of the Stour Valley. Today they call the area ‘Constable Country,’ as many of his greatest works show local scenes: ‘I should paint my own places best,’ he once wrote. In the painting you can see Dedham church in the distance beyond the meandering river. 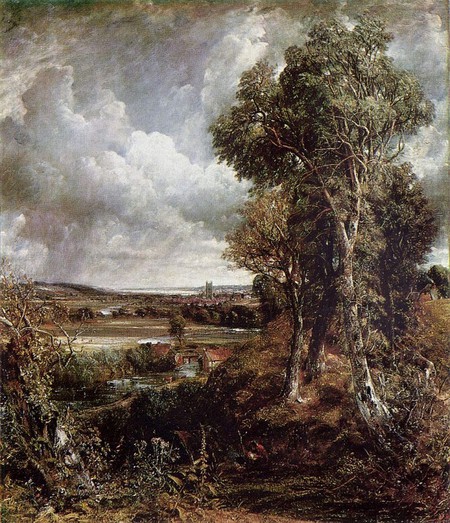 Constable found little success within his lifetime. Few of his great landscapes sold, so he had to rely on portrait and country-house work for patrons from amongst the East Anglian gentry. Wivenhoe Park in Essex was owned by Major-General Francis Slater-Rebow. He was a friend of Constable’s father and had commissioned a portrait of his daughter in 1812. In Constable’s vision, his Wivenhoe Park estate becomes a place of tranquillity. The sun shines down on the cows in the meadow, the fishermen in the lake in the foreground, with the trees on the far side of the lake and the house in the distance. He took a degree of license in the work, as in reality the house and the lake don’t form part of the same vista. You can see it the National Gallery of Art in Washington, D.C. 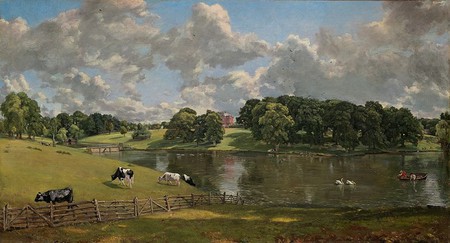 Wivenhoe Park was an important commission in an important year for Constable. It brought him extra money to add to the inheritance that came to him when his father died in 1816, allowing him to finally marry Maria Bicknell. He had known her since 1800 and courted her since 1809, only for her family – her grandfather was the Rector at East Bergholt – to oppose the union. Constable viewed his portrait work as no more than necessary hackwork to secure funds, and his landscapes have always been much more celebrated. But in his portrayal of women he does achieve a level of tenderness and warmth, especially when painting his wife. Lucian Freud cited Constable’s portraits as a big influence. The portrait is now in the Tate Britain collection. 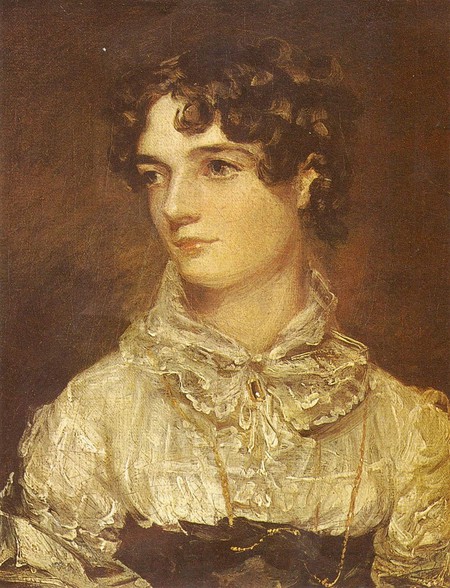 Flatford Mill was the first of Constable’s ‘six footers’ and is another work now at Tate Britain. It was shown at the Royal Academy in 1818 as Scene on a Navigable River and re-named Flatford Mill in 1819. The mill was owned by Golding Constable, father of the artist and a farmer, miller and corn merchant. Constable never sold the canvas in his lifetime. It shows a working scene, with the mill in the background as a shire horse draws a set of barges up the River Stour towards the bridge that just creeps into view in the bottom corner of the painting. Much of the work is made up of Constable’s rendering of the sky and river bank trees. It was precisely this attention to the humble, rural scene of labour that inspired the French Barbizon School painters like Millet, Corot and Daubigny. 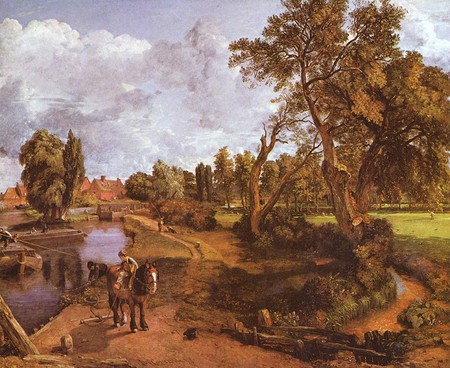 One of the most popular attractions at the National Gallery in London, The Hay Wain is now perhaps the most famous of English landscape paintings. But there’s an irony here, for it failed to find a buyer when shown at the Royal Academy in 1821 and was feted not in Britain but in France, where it won the Gold Medal from Charles X after being exhibited at the Paris Salon in 1824, and inspired the French Romantics Delacroix and Gericault. A wain is an old name for a wagon, which we see crossing the Stour. In the distant meadow are workers making hay, and on the left is the cottage of Willy Lott which today still stands unspoilt, much as Constable would have known it.

Salisbury Cathedral from the Bishop’s Grounds, 1823

Constable met John Fisher in 1798, and he became an important patron. He became Bishop of Salisbury in 1807 and often invited Constable to visit, where he would sketch the great medieval Cathedral. In 1822, Fisher commissioned a work from Constable. The painter chose to show the Cathedral from the Bishop’s Grounds, with Fisher and his wife shown looking back at the Cathedral in the bottom left corner. The Cathedral itself was a huge challenge, with its intricate Gothic exterior. Constable frames it through the trees, with the water meadow and cattle in the foreground. The original of 1823, now in the V&A, featured a slightly dark cloud above the Cathedral, which Fisher disliked, so Constable re-did it. That sunnier version is in the Frick Collection in New York – and that version is pictured here. 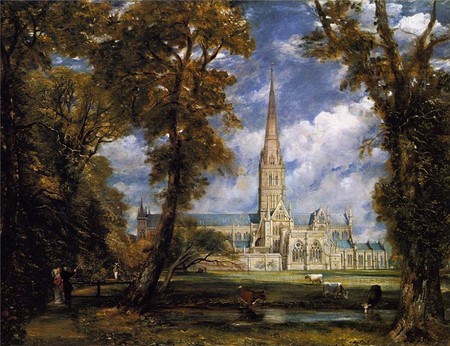 Another scene of rural labour on the Stour, Constable shows a man in red waistcoat struggling to open the lock at Dedham to let a boat pass along the river. On the far side of the lock, we can make out another man, apparently digging with his horse and dog, and across the fields in the distance is Dedham Church. Stretching its branches up into the sky is a great tree, whilst the sky is beginning to bruise slightly and darken. This is the only one of the Stour paintings in private hands, having been sold in 2012 for £22.5 million by the Bornemisza Museum of Madrid. This was curiously fitting, as The Lock was the only one of Constable’s works to have sold when originally exhibited at the Royal Academy in 1824. There’s an excellent video here from Sotheby’s about the work.

In 1828, Maria died, leaving Constable devastated. This six-footer reflects the sombre, melancholic mood of the years that followed for Constable. He had first seen Hadleigh Castle in Essex in 1814, when he sketched the landscape, and from this he developed the 1829 image. The Castle is no more than decaying ruins, the landscape craggy and ragged, the cowherd separated from his beasts, and the Thames stretches into the distance beneath an ashen sky. Constable described himself at this time as a ruin of a man. He was elected to the Royal Academy too in 1829, though the President Sir Thomas Lawrence tartly informed him he had been lucky to be selected over several others who specialized in historical painting. It’s held by the Yale Center for British Art.

Salisbury Cathedral from the Meadows, 1831

Acquired by the Tate Collection in 2013, this had been part of a private collection since 1983. Constable called it ‘The Great Salisbury‘ and showed it at the Royal Academy in 1831. It’s a much more dramatic and turbulent work than his earlier Salisbury pieces. The sky is more varied and wild, an image of his feelings in the years after his wife’s death. But there is hope in the painting too – the Cathedral stands for hope and resurrection, its spire haloed by a circle of blue sky in amongst the dark clouds above. The horses in the foreground are revivifying themselves by drinking the waters of the River Avon, and a rainbow – a meteorological impossibility given the sky – suggests optimism for the future. 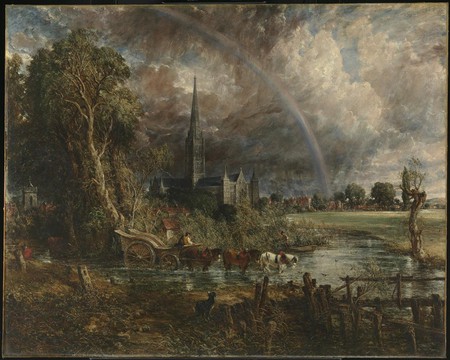 Hampstead Heath with a Rainbow, 1836

This is another in the Tate collection. Suffolk, Salisbury and Hampstead Heath are the three great landscapes that most interested Constable. When he died in 1837, he was buried at Hampstead, where he been coming since 1819. Back then, Hampstead was still a rural landscape, but Constable came here as much to portray the sky as much as the scenery. This 1836 work is the last of Constable’s Hampstead works. He adds an imagined windmill to the scene, a nod perhaps to the influence of Jacob van Ruisdael, the Dutch landscape master whose work often featured windmills. There’s another rainbow that cuts through the dark clouds above the Heath – symbolic, perhaps, but Constable was also deeply interested in the science of optical phenomena like rainbows. 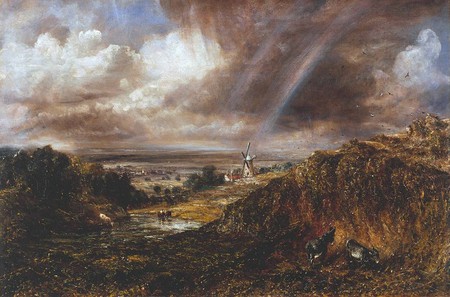 (c) Irina/Flickr
Give us feedback