10 Artworks By Dante Gabriel Rossetti You Should Know 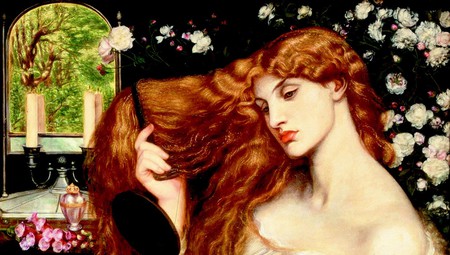 Born in London in 1828, English painter Dante Gabriel Rossetti, brother of poet Christina Rossetti, was a co-founder of the Pre-Raphaelite Brotherhood – a movement that sought to reject the promotion of Italian Renaissance master Raphael’s aesthetics in favour of the purist themes in medieval art. Sensual and symbolic, Rossetti’s art covered religious, mythological and literary themes in nature – here we profile some of his best-known works from Proserpine to Lady Lilith.

The Girlhood of Mary Virgin

Exhibited in 1849, The Girlhood of Mary Virgin – the first major oil painting Rossetti completed and the first of his artworks inscribed with the initials ‘PRB’ (standing for Pre-Raphaelite Brotherhood) – depicts a young Mary with her mother, St Anne, accompanied by a child-angel and her father, St Joachim, in the background. Full of religious symbolism, the inclusion of lilies points towards Mary’s purity, and the dove represents the Holy Spirit, while the palm branch on the floor symbolizes Christ’s Passion and the books depict the virtues of faith, hope and charity. 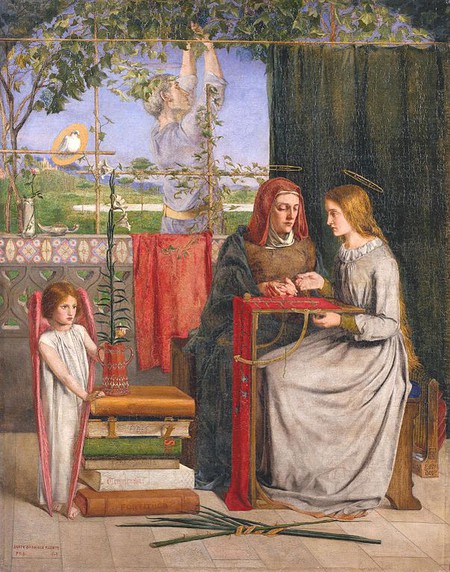 Another of Rossetti’s early works, Ecce Ancilla Domini! – a radical reimagining of the Annunciation of the Virgin Mary – was exhibited in 1850 at the short-lived art society, the National Institution, though the negative reception the painting generated would discourage the artist from exhibiting his works in public in the future. While the work retains some traditional themes of the Annunciation in art – as with The Girlhood of Mary Virgin, the lily represents purity and the dove symbolizes the Holy Spirit, for example – Rossetti breaks with custom in his depiction of Mary as surprised by the Angel Gabriel in bed somewhat dishevelled and perhaps even afraid, rather than her usual portrayal in a moment of religious contemplation. 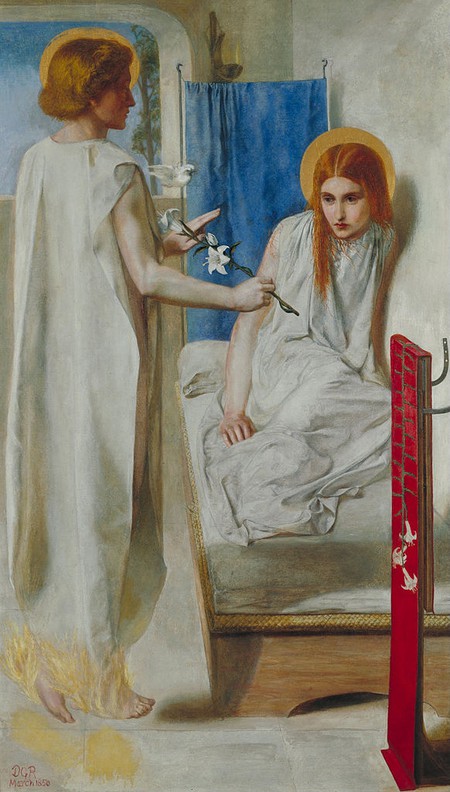 Undoubtedly one of Rossetti’s best-known works, Proserpine portrays the titular Roman goddess as the Empress of Hades in a gloomy, contemplative pose following her abduction to the underworld by Pluto, condemned to be his wife. Featuring Jane Morris (the wife of English designer, writer and artist William Morris) as model for Proserpine – a frequent muse of Rossetti’s with whom he enjoyed a long-spanning intimate relationship – the painting is often said to be an allegory for Jane’s unhappy marriage. An accompanying sonnet penned by Rossetti, also a poet, is inscribed in Italian on the painting, adding weight to this theory and evoking the artist’s longing for his muse.

Housed at Boston’s Museum of Fine Arts, Bocca Baciata features another of Rossetti’s long-time muses and mistresses, Fanny Cornforth – a flame-haired beauty who posed for other highly sensual works by the artist including The Blue Bower and Aurelia (Fazio’s Mistress) and took care of him towards the end of his life. Written on the back of the painting is a line from 14th-century Italian writer and poet Giovanni Boccaccio’s The Decameron, ‘Bocca baciate non perda ventura, anzi rinova come fa la luna’, which translated means ‘The mouth that has been kissed loses not its freshness; still it renews itself even as does the moon’. 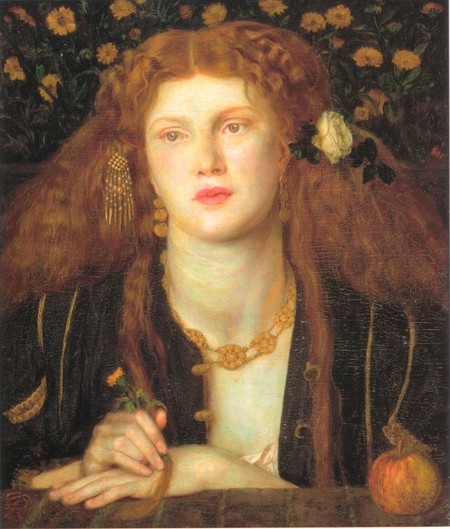 Late medieval Italian poet Dante Alighieri would feature prominently in the life and works of Rossetti: not only was his father, Gabriele Pasquale Giuseppe Rossetti, a Dante scholar, but the artist would also reorder his name (he was born ‘Gabriel Charles Dante’) in honour of the Divine Comedy writer. In Beata Beatrix, Rossetti parallels Dante’s story of the death of his real-life unrequited love, Beatrice Portinari, in La Vita Nuova with that of his own wife, Elizabeth Siddal, who died in 1862. In the painting, a dove carries a white poppy in its mouth – a reference to Elizabeth’s death by her own hand after taking an overdose of laudanum, an opium derivative. 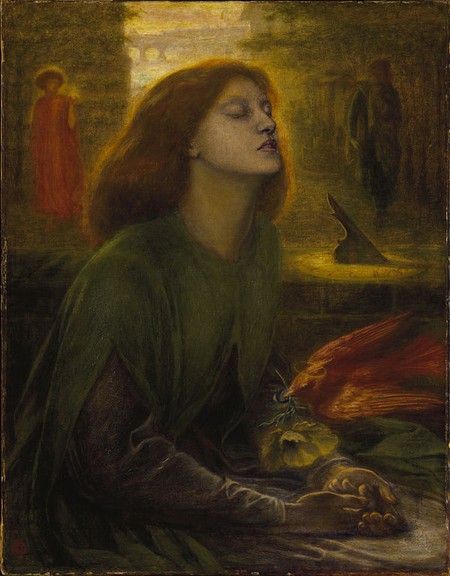 Lady Lilith’s titular subject was, according to Judaic myth, the first wife of Adam and a seductress and murderess. Here she is portrayed as an Amazonian beauty in a languidly sensual pose that contrasts with the painting’s companion piece, Sibylla Palmifera, in which spiritual, rather than physical, beauty is emphasised. Interestingly, the original painting featured Fanny Cornforth as the model for Lilith though she was replaced by another of Rossetti’s muses, Alexa Wilding, in the 1870s – it is not known whether this was at the request of his client, Liverpool-born shipping magnate and art collector Frederick Richards Leyland, or by his own volition.

An out-of-the-ordinary Rossetti painting, Found is the only work by the artist depicting the social and moral problems of modern urban life. In the painting, a countryman arrives in London to sell a calf and comes across an ailing woman collapsed in the road who he recognises as his former sweetheart, now a prostitute, and it is said that Rossetti intended to draw parallels between the fallen woman and the calf both as animals to be sold. Though Rossetti would return to the work several times, Found remained unfinished by the time of his death in 1882. 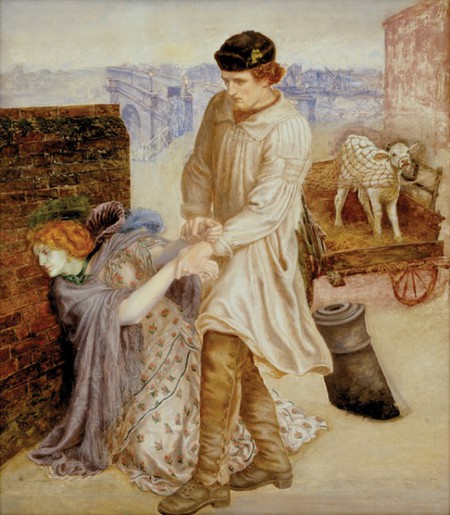 In The Beloved, currently on display at the Tate Britain in London, Rossetti employs the Song of Solomon – a biblical scripture celebrating sexual love – to depict the power of female beauty. A bride, modelled by 19th-century beauty Marie Ford who Rossetti greatly admired, accompanied by her bridesmaids appears lifting her veil to reveal her beauty to her bridegroom for the first time, and the painting brims with exoticism, from the bride’s intricate Peruvian headdress to her Japanese kimono dress. It is thought that the inclusion of the young black boy was intended by Rossetti to add a further ‘exotic’ note and may have been inspired Édouard Manet’s Olympia, which he viewed during a trip to the artist’s studio in 1864. 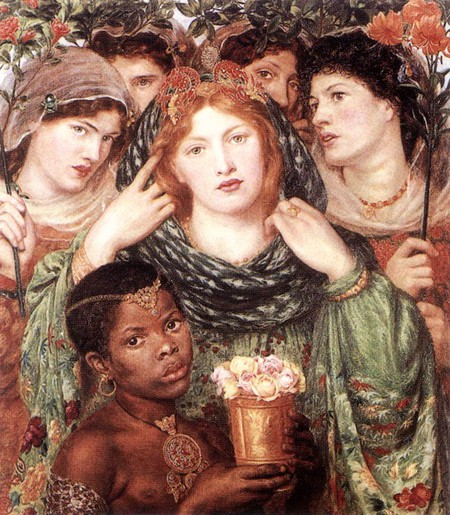 Another Rossetti artwork inspired by Dante Alighieri’s La Vita Nuova, Dante’s Dreams portrays the Italian poet in a dream in which a winged figure representing Love leads him to the deathbed of Beatrice Portinari, the subject of his unrequited affection, while symbolic elements – like the apple-blossom carried by Love representing unconsummated love and the strewn poppies signifying sleep and death – add further layers of meaning. Unlike Beata Beatrix, Rossetti’s mistress Jane Morris is the model for Beatrice in Dante’s Dreams though it is said he altered the painting before its sale to the Walker Art Gallery in 1881 to combine Morris’ facial features with the fiery red hair of his late wife Elizabeth Siddal. 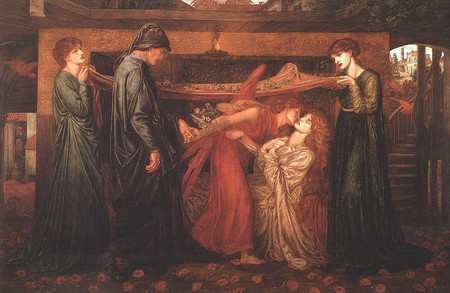 Painted in 1880 just two years before the artist’s death when his mental and physical health was in serious decline, English writer Evelyn Waugh said of The Day Dream, ‘All of Rossetti’s failing concentration and genius was lavished upon this beautiful canvas’. Again featuring his beloved Jane Morris as model, Rossetti’s inclusion of honeysuckle in The Day Dream – a symbol of love in the Victorian era – may have been a deliberate hint towards the muse and artist’s illicit affair. Bequeathed by its commissioner Constantine Alexander Ionides to the Victoria and Albert Museum in 1900, The Day Dream is considered Rossetti’s last worthy painting. 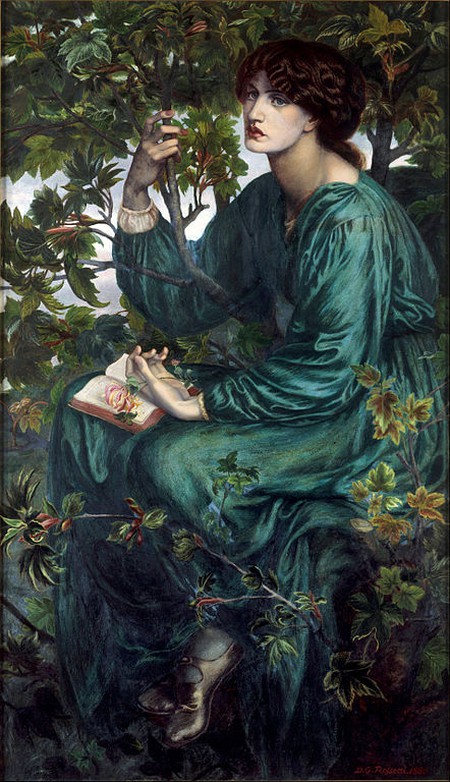