You Have to See These 10 Amazing Buildings When Visiting London 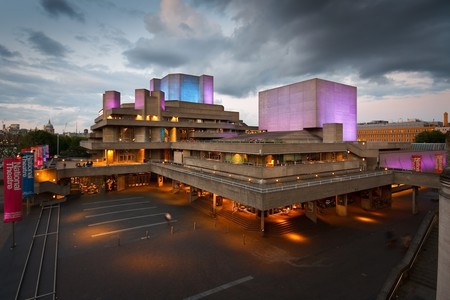 London has some of the most iconic landmarks in the world when it comes to modern and contemporary architecture. Here are 10 you won’t want to miss when visiting the city.

The Shard is designed by one of the world’s most important living contemporary architects – Renzo Piano – who was also responsible for the Pompidou in Paris and the Whitney Museum of American Art in New York. It was previously known as the London Bridge Tower and opened back in 2013. It was designed as a ‘vertical city’ – Piano’s vision was for a spire-like structure that would cater for thousands of people, containing office space, restaurants, residences and the five-star Shangri-la Hotel.

The structure is at the heart of the new London Bridge Quarter on the Thames’ south bank and soars into the sky at an impressive 1,016 feet – it’s currently the tallest building in western Europe and the viewing deck on the 72nd floor offers unbeatable panoramic views up to 40 miles away.

Piano’s contemporary Richard Rogers said of the building: ‘The Shard is the most beautiful addition to the London skyline. Its beauty is in part due to the ever-changing play of light across the facades of the building.’ 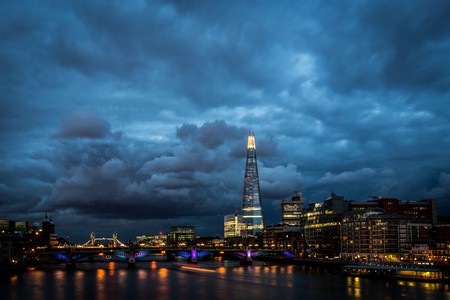 The Royal National Theatre company was originally based at the Old Vic theatre in Waterloo, but moved to its current location on the South Bank in 1976. It has seen its fair share of notable productions and performances, with actors such as Judi Dench, Anthony Hopkins and Daniel Day-Lewis treading the boards over the years.

Its imposing Brutalist architecture is very much a product of its time, but its angular aesthetic, featuring a mix of horizontal and vertical elements, has become one of the capital’s most distinctive sights. It wasn’t to everyone’s taste, however, with Prince Charles describing the building as ‘a clever way of building a nuclear power station in the middle of London without anyone objecting’. It has appeared in lists of both the top 10 ‘most popular’ and ‘most hated’ London buildings.

Battersea Power Station is actually two different buildings – A Station and B Station – joined together to form the iconic four-chimney structure that dominates the local skyline. It stopped generating electricity in 1983, but still remains one of the world’s largest brick buildings, and is Grade II listed. The building’s exterior was designed by Sir Giles Scott, also famous for designing the red telephone box and Liverpool Anglican Cathedral.

The site is now part of a huge regeneration scheme that includes office space, residential apartments, shops, roof gardens, leisure space, and even a lift and viewing space in one of the towers. In 2016, it was announced that Apple will locate its new London headquarters to the building, while previous proposals include a theme park and a stadium for Chelsea Football Club. 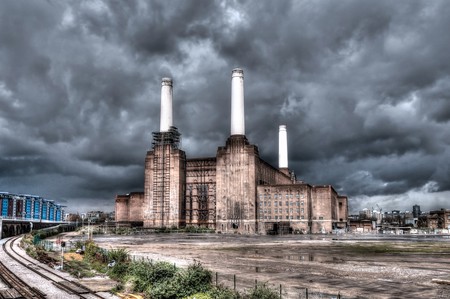 The Saw Swee Hock Student Centre is a distinctive red-brick building that Irish architecture firm O’Donnell + Tuomey has likened to a Japanese puzzle – its irregular, multi-faceted shape stands out against London’s medieval streets and period properties. Named after a donor to the project, the building’s unusual design isn’t just about aesthetics, as it was constructed in this way to ensure ‘the right to light’ for neighbouring properties, while also maximising the internal space and drawing in natural light into the seven-storey building.

The student centre has a raw industrial feel inside, with exposed structural details and concrete floors, and houses a nightclub and bar in the basement, while upstairs is a cafe, career office, gym and a multi-faith centre – offering a calm space to meditate. 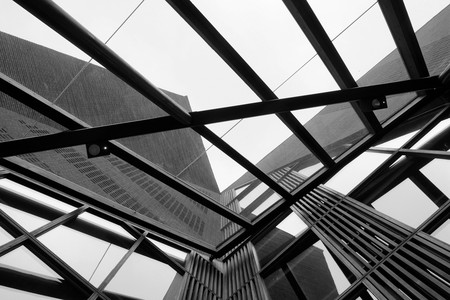 The London Aquatics Centre by Zaha Hadid Architects was a showpiece of the London 2012 Olympic Games, and is now a public swimming pool complex. The main attraction of the building is the wave-like roof, which was inspired by the smooth flow of moving water and was built to rest on the building without columns, to give spectators an unrestricted view of the action. 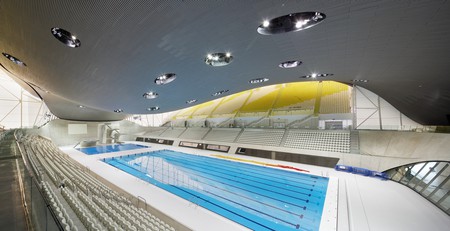 One Pancras Square, which sits between King’s Cross and St Pancras stations, is one of London’s new flexible office buildings, and is a central part of the wider regeneration of the King’s Cross area.

The most prominent feature of this understated building is the recycled cast-iron columns that proudly surround the entire structure. These sturdy columns, forged from recycled car brake discs, are a nod towards the Victorian architecture and engineering heritage of the site.

Having achieved a BREEAM ‘Outstanding’ rating, this building is also one of the most sustainable in London, using the latest technology to reduce running costs for occupiers and minimise environmental impact. 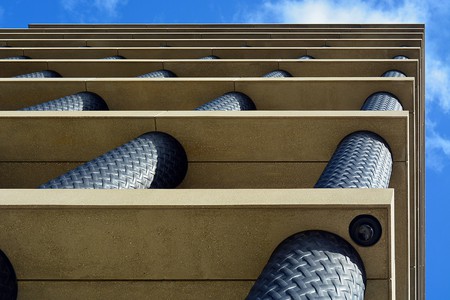 Located in the heart of London’s financial district, the Lloyd’s building was designed by Rogers Stirk Harbour + Partners – the minds behind the Millennium Dome and the National Assembly for Wales in Cardiff.

Sometimes known as the Inside-Out building, it got its nickname as a leading example of Bowellism architecture in which many of the main services for the building, such as lifts and ducts, are located on the outside to maximise space inside.

In 2011, it became the youngest building to achieve Grade I status, and has been said by Historic England to be ‘universally recognised as one of the key buildings of the modern epoch’. On the 11th floor is an 18th-century dining room, which had been transferred from the previous Lloyd’s building. 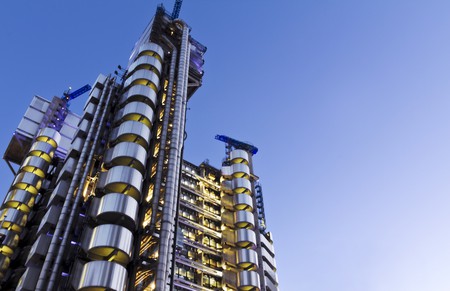 The Switch House was the result of a 12-year project to expand the capacity of the Tate Modern by 60%. It was designed by famous Swiss architect firm Herzog & de Meuron, which was also responsible for the conversion of the Bankside Power Station into the main Tate Modern building.

It was originally supposed to be a stepped glass pyramid, but this was changed to a brick facade, designed to match the original boiler house’s aesthetic. The Switch House has 10 floors, exhibiting work by over 300 artists – a notable piece is a 22-foot-tree sculpture by Chinese artist and activist Ai Weiwei. 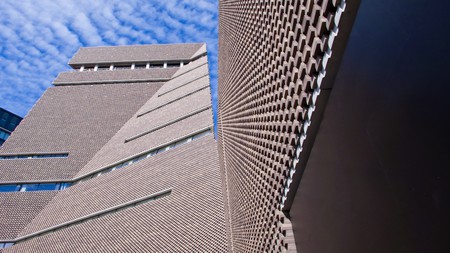 This imposing art-deco building is the administrative centre of the University of London. At 19 floors and 210 feet high, it was the highest secular building in London when it was built in the 1930s. During the Second World War, Senate House was used by the Ministry of Information, and was the workplace of George Orwell’s wife Eileen. It became the inspiration for the Ministry of Truth in Orwell’s seminal novel Nineteen Eighty-Four.

As well as Senate House, architect Charles Holden also designed many London Underground stations during the 1920s and 1930s, including the stunning Southgate tube station. The building also houses an impressive library and has featured in several Hollywood blockbuster movies. 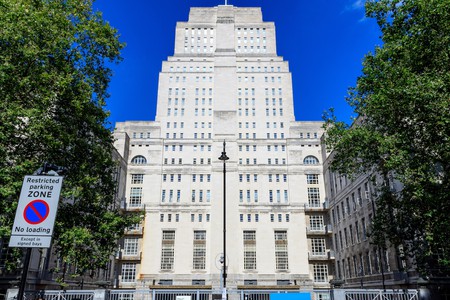 London’s Design Museum was originally housed on the south bank of the Thames in a former banana warehouse, but moved to its new home in Kensington in 2016 after around five years of construction. It was partly funded by a £17.5m donation from the museum’s founder Sir Terence Conran.

The building is Grade II* listed and was built in the 1960s, but stood vacant for over a decade. It features an eye-catching hyperbolic paraboloid roof, and modern interior split across three floors – tripling the space of the museum’s previous home. 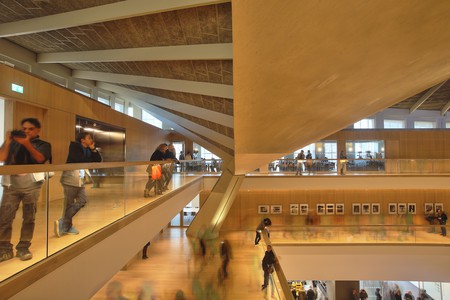 This list was compiled by Utility Design to celebrate London’s finest buildings during the London Festival of Architecture.