Why You Should Visit the Lesser-Known Channel Islands 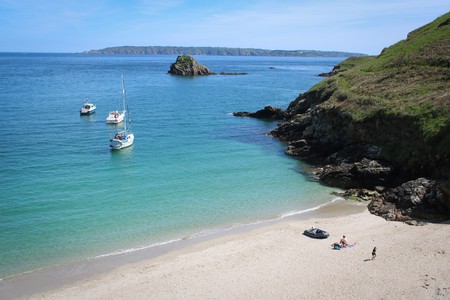 The Channel Islands seem a million miles away across the ocean, but they’re just a hop, skip and a jump on a boat from Southampton or a plane from Exeter, and are the perfect location for a weekend away. The Channel Islands are relaxing, beautiful and almost Caribbean if you get the right weather. It’s not just about Jersey and Guernsey either – the lesser-known, smaller islands are also worth your time. Here’s our guide to exploring them.

Alderney is the third-largest of the Channel Islands, but at only three miles long by one and a half wide, that’s not really saying much. This only adds to its magic, and makes it all the more remarkable just how much bang for your buck Alderney provides.

The trump card here is the soaring wildlife; puffins, gulls, gannets, fulmars, guillemots, plovers, terns and razorbills are all prevalent on islets, beaches and cliffs around the island. You won’t know where to point your binoculars first.

It’s not all winged wildlife, however, Alderney also being home to blonde hedgehogs. It is estimated that about half of the hedgehogs on the island have a rare gene which makes their spikes lighter. If you want to spot one, keep an eye out on the side streets of St Anne, or on the freshly mowed fairways of the island’s golf course.

History is the other huge draw to Alderney, with Roman ruins and the remains of a fort built by Henry VIII all being of exceptional interest. But the most pertinent of all the landmarks on this small island date from the Victorian times, when the British decorated the island in forts, 18 in total, to dissuade the French from invading.

During WWII however, the Channel Islands fell into the hands of Nazi Germany, and the forts here were turned into the only four labour camps on British soil, transforming the island from a place of beauty to an unassailable hell. Around 700 people died here during the war, and there is no mistaking that it’s a haunting experience exploring these relics.

Mother Nature is in the process of reclaiming these relics for the greater good, with sea birds nesting in water-facing fort walls, and barn swallows raising their young in former Nazi tunnels.

Sark is a world apart from everything we know about the British Isles. The fourth-largest of all the Channel Islands, it has put itself into a self-induced time warp – there’s a ban on vehicle traffic, and the local government comes via an old-fashioned (and rather controversial) island parliament.

Geographically, Sark is quite different from the other islands too, as it mostly consists of steep cliffs and a plateau of green on the top, meaning there are only a couple of beaches. Visitors can travel Sark by one of three ways; by foot, by bike, or by horse drawn carriage. You may be lucky enough to hop onto the back of a tractor pulling a trailer, but that’s as motorised as things get here.

Along with cars, there are no streetlights here, meaning that the night skies positively shimmer when the sun goes down every night. You can stargaze here with the naked eye, without the need for a telescope.

For the adventurous, Sark has a wealth of wrecks just off the coast, and the sea kayaking, diving and coasteering here are second to none. If that doesn’t take your fancy, then the coast paths atop the cliffs offer enough stomach-dropping views in their own right.

You won’t even find a bicycle on Herm, let alone a car. But you don’t need either, as such a miniature island is best discovered by foot.

For such a small island, Herm has quite a fascinating history, and has been the site of a neolithic burial ground, a monastic sanctuary and a granite quarry. Herm has also had some interesting residents in its time, with an eccentric Prussian Prince taking up residence here, Whiskey Galore writer Compton Mackenzie and a chairman of the Ford Motor Company, who gave Herm’s sole hotel its name: The White House.

The small desert island-esque paradise is just three miles off of Guernsey, and can only be accessed via ferry or private boat. Most visitors just stay for the day, but Herm really comes to life at night, when the day-trippers have returned to the main island and peace descends. At dusk you can share the empty beaches with oyster catchers, skinny dip as the sun sinks into the watery horizon, and wander through quiet pathways as the stars begin to shine. 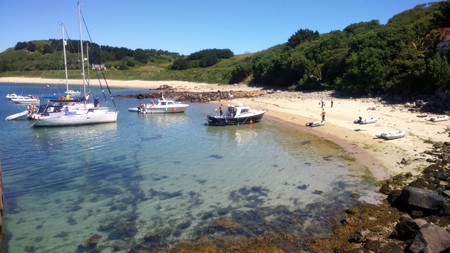 View of the dock, Herm | © Tanya Hart/Flickr
Give us feedback