Before the release of Dunkirk, Culture Trip’s Film and Television editor Cassam Looch explains how a piece of film criticism from Chuck Palahniuk led to a love of Christopher Nolan and a decade-long hunt for an online review.

Somewhere in the recesses of my mind, I vividly remember that one of the first pieces of online film criticism I ever read beyond an IMDb review or hastily edited web version of an Empire Magazine essay was a short piece by Chuck Palahniuk.

The Fight Club author was something of a big fish himself at the turn of the millennium, having seen David Fincher adapt his aforementioned book into a hugely successful film that had been lauded by critics and fans alike. Palahniuk had become an unofficial spokesman for millennial angst managing to walk that tightrope between machismo and chauvinism that one can so easily fall off nowadays.

The two films mentioned so far are linked in many ways, but that wasn’t the thrust of the writing I remembered reading. I have tried, on many occasions, to find the piece in question, the website it was originally hosted on now sadly defunct, yet somehow I recently found it through a series of random searches. It was during the early days of the Internet, pre-broadband and on a dial-up connection that would last as long as no one else in the house would use the phone, that I stumbled upon the review. Fittingly enough, it turns out I had recalled most of the details incorrectly (it absolutely wasn’t a ‘review’ at all), and the piece entitled ‘Now I Remember…’ is itself about the fractured nature of our memories and our increasing reliance on note taking.

Palahniuk proposed that making notes to ourselves had become a modern day obsession and that Memento, which came out in 2001 (less than a year after Fight Club) was Nolan’s attempt at expressing this new phenomenon. 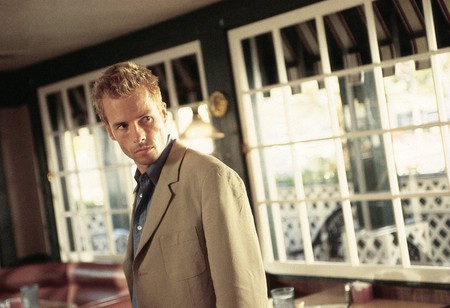 Memento, for the uninitiated, is a thriller that dispenses with such frivolities as a linear structure or reliable narrator and instead gives us a central character who suffers from crippling short term memory loss. It’s a revenge movie where the act of vengeance happens in the opening few minutes and the various things that lead up to this are told to us in reverse chronological order.

Guy Pearce, a huge-grin wearing actor previously best known for a turn in popular Australian drama Neighbours, stars as Leonard, a man whose unfortunate condition leads him to adorn his body with tattoos in order to remember important information, as it will otherwise be out of his head by the time he wakes up. His walls are covered with notes to himself and he takes Polaroid pictures too, just to capture significant people or things he sees. To top it all off, Leonard wakes up every day and learns that he is on a desperate mission to hunt down and kill the men he believes were responsible for the murder of his wife, and who attacked him leaving him in this broken state.

If you haven’t seen the film, then you’ve almost certainly read enough about it to know that it’s pretty much loved by everyone. There are plenty of glowing reviews out there, but that’s not what made Palahniuk’s article stand out to me back then, nor is it what makes both the film and the essay related to it feel so relevant now.

You might also like: TV By Design: Did Westworld Fall Victim to Fan Theory or Was it Planned All Along?

Memento has become even more about modern day living with all the things Leonard does to himself to remember being the exact same things we do now. When Palahniuk wrote his short review we were in a time before smartphones. Mobiles were, at best, able to send rudimentary text messages and make hugely expensive calls. 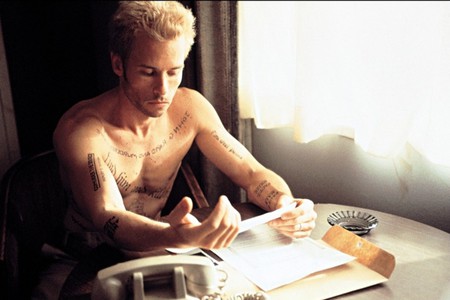 Leonard wonders if he has been a victim of a workplace injury? | ©

Physical note taking was still king and pictures were a relative luxury. If we compare the film’s central character to ourselves, Leonard’s daily routine, his daily grind of waking up, reading the latest updates, and piecing to together the day before via various notes and images is exactly what we do now. We might just scroll through our conveniently placed mobile which has been charging over night instead of having countless fresh tattoos, post-its or Polaroids to consult, but the process is same. Oh boy, is it the same.

In many ways I felt particularly pleased with myself for making that link between the essay and the film Memento. Then I re-read Palahniuk’s work and realised he had basically made all the links already and I was, at best, merely verbalising to an irritatingly obvious degree what he had clearly implied.

Testament to how unreliable our own memories can be, it turns out that I would have read the essay several years later than I previously thought. Now I Remember is actually a chapter in a collection of short non-fiction articles entitled Stranger than Fiction: True Stories, which was first published in 2004.

Dunkirk is on general release from July 24, and all the latest news on Chuck Palahniuk is available on his site.